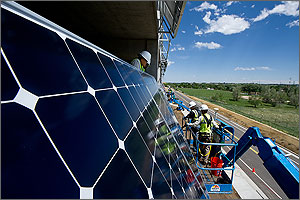 It's no secret that researchers at the U.S. Department of Energy's (DOE) National Renewable Energy Laboratory (NREL) do cool things — including finding new ways to capture energy from the sun and wind. But there's nothing cooler than working on a parking garage, right?

"It doesn't sound glamorous, but it is a place for building energy savings," NREL Energy Efficiency Research Engineer Jennifer Scheib said. "A garage typically uses 15% of the energy that the building that it is designed to support uses. Many would say it's only 15% of the energy, but we'd say it's still 15% that can be improved on. For every watt you save in the building, that's $33 worth of photovoltaics you don't have to buy when you are targeting net-zero energy." A net-zero energy building produces as much energy as it uses over the course of a year.

NREL bid the parking garage and accompanying site entrance building for the lab's expanded campus using the same streamlined design-build process that was leveraged in the construction of the Research Support Facility (RSF). The team of RNL and Haselden Construction partnered with NREL to build these new energy-efficient facilities.

"It's an interesting thing to look at a parking garage as not just something that's subservient to the campus, but as a building that has its own energy-saving contributions to make," RNL Senior Project Manager Tony Thornton said. "There's usually a lot of sacrifice when it comes to designing a garage. So often, people don't care about the energy, they don't care as much about the aesthetics, and they don't think as much about the lifespan because it feels like a secondary structure."

Making NREL's garage an attractive structure that's both affordable and high performing presented a unique combination of challenges. In the end, the design-build team came up with a structure that is expected to perform 90% better than a standard garage built just to code.

Turning Off the Lights 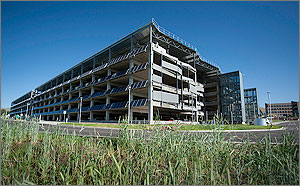 A key focus from the beginning was how to light the parking structure. Fundamental building features such as structure type and bay sizing were carefully considered, in part to reduce the need for electric lighting. This upfront, integrated design allowed the lighting to be reduced by 90% versus code.

"We started by doing a survey of other garages to see how low the lighting density could go, because we knew lighting is one of the biggest energy uses," Scheib said.

NREL required daylighting to be one footcandle at minimum, even on a cloudy winter day. This means that the garage's lighting system should be off except at night. To ensure proper illumination, a daylight model was created for the garage. "That's unique because most people wouldn't pay to model a garage," Scheib said. "But to get it right, it had to be done."

The skin of the garage is made of perforated aluminum panels that let in sunlight (while keeping out weather). There are also light wells that draw sun into the middle of the structure. Stairs are central to the design; they are well lit and so convenient that most people don't even realize there are elevators.

But nighttime is when NREL's garage looks really different — it's dark. "At night, when lights are needed, there are occupancy sensors in zones; as you move through the space, the lights turn on for you," Scheib said. "That's great for energy, and it's also great for the neighbors."

To handle the dark, the garage has a lighting control system normally used in office buildings, which leverages daylight and occupancy sensors. "By taking these systems and combining them with quick-response LED lighting, we could do it in a way that made the parking garage safe while maximizing the way that it saves on power use," Thornton said.

Most parking garages are open to the outside, so there is the opportunity to turn off some of the lights. In garages for retail buildings, this presents challenges because people perceive fewer lights as a security concern, and companies want to appear open for business. But according to Scheib, when it comes to lighting, safety is largely based on uniformity, rather than having very brightly lit spaces with stark light boundaries.

"While some might be worried about approaching a dark garage, we've heard that some people at the lab now see it as a safety feature," Scheib added. "If you approach and see the lights on, you know someone is in the garage, because otherwise the lights would be off."

Other energy-saving features include natural ventilation, which saves energy because there are no mechanical systems. The perforated panels are made from recycled aluminum, which can be recycled again. The paneling is used sparingly to maximize daylighting, but it also keeps snow and rain out.

Where the south side of the building didn't need as much protection from the weather, NREL staff and designers had the opportunity to get creative.

"We were investigating using the same aluminum panels, even though they don't have the same job as the north and west sides," Thornton said. "But NREL staff recommended during a project meeting that the south side be covered in solar. It turned out great. It's hard to see the panels on the roof of the garage or the RSF. On the south where panels will be most visible to the world, we have the ability to extend the message of what NREL is about."

The south-side solar panels are a striking sight that when added to those on the roof brings an additional 1.13 MW of solar to the NREL campus and helps make the RSF and garage net-zero for energy use. The panels also help offset the energy used by the garage's 36 electric vehicle charging stations. 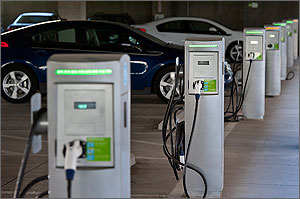 The size of a structure that can accommodate 1,800 parking spaces is impressive. But it also brings to mind something else — traffic. Getting people on and off the campus smoothly was another crucial part of the planning.

"Before the construction of the RSF, we did an environmental assessment, and a traffic study is part of that," NREL Transportation Project Manager Lissa Myers said. "We did determine that moving large numbers of staff on site could have potential significant impact to the nearby traffic intersections."

Traffic impact scenarios included morning backups onto nearby I-70 and afternoon backups from a nearby intersection back to the NREL east gate. These traffic tie-ups would impact all the neighboring office buildings and the residential community.

In the short term, after the RSF was built and while the parking garage and south entrance were still under construction, NREL put a traffic mitigation plan in place. Staff parked at a nearby shopping mall, and shuttles bussed employees back and forth between the campus and offsite parking. NREL also continues to offer bus passes and van pool vouchers, and encourages staff to carpool, bike to work, and take advantage of alternative work schedules and telecommuting.

With the parking garage now open, NREL no longer has offsite parking that requires shuttle buses. NREL also worked with the local transportation district to shift a popular bus route to drop off NREL employees right at the south entrance, so they can easily walk to their offices.

Ongoing traffic assessments indicate the system is working. The morning and afternoon delays at the east and south entrances are minimal. "With all of these efforts, we have worked to spread the traffic out, so there isn't one high-impact area for the surrounding community," Myers said. A follow-up traffic study is planned in 2013.

NREL's south site entrance building is compact and highly efficient. It's a net-zero energy building and has the same types of daylighting and occupancy sensors as the garage and the RSF.
Credit: Dennis Schroeder

Some employees who can't take advantage of alternative transportation are now entering NREL's campus via a new road and site entrance building.

"The south entrance building is pretty wild. It is a hyper-efficient building," Thornton said. "It's a little security station — again, those are not given much respect and are usually very utilitarian. This building is brighter and more welcoming to visitors. The point is to make it feel like it does when you visit the RSF."

The new site entrance building has a wind catch tower for natural ventilation and features geothermal heating and cooling. It's a net-zero energy building and has the same types of daylighting and occupancy sensors as the garage and the RSF.

Both the garage and the new site entrance building are metered like the RSF, so NREL can monitor energy use to ensure that the buildings meet design goals. When people ask how NREL's buildings are performing, researchers know they will able to answer confidently.

"We believe the site entrance building will fall into the upper range of LEED [Leadership in Energy and Environmental Design] points," Thornton said. "If 80 out of 100 is needed for platinum designation, we're trying to achieve a score in the 94–95 range, because we are maximizing the sustainability of the structure."

The metering and the ability to prove that buildings can be built to be energy efficient, high performing, and still affordable is important to NREL's mission to help shape the commercial buildings of the future.

"The big picture is that no matter what, there is room for innovation in the design process to see savings as big as 90% over code," Scheib said. "It doesn't matter if it's a parking garage, lab, or office building."

"There's no demonstration piece better than a living, active building," Thornton said. "As designers, we can talk about designs and concepts all day long, but built structures speak to all clients. If you can show them rather than tell them, it makes all the difference."