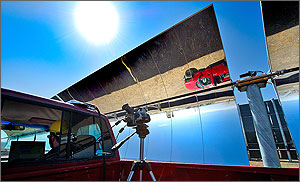 At SkyFuel Inc.'s testing facility in Arvada, Colorado, NREL Engineer Allison Gray drives a pickup truck equipped with Thermal Scout, a device that teams a GPS unit on the roof with an infrared camera in the pickup bed. NREL colleague Benjamin Ihas checks the readings on a laptop to the right of the driver's seat.
Credit: Dennis Schroeder

At a 20-megawatt concentrating solar power (CSP) plant, some 10,000 mirrors reflect sunlight onto 10,000 receiver tubes, each of which must operate efficiently to get the maximum impact from the sun.

Yet, operators don't have a good sense for which among the 10,000 tubes may have an air leak, or a hydrogen leak, or have been shattered by a flung rock. The best they can do is look at the entire output and roughly guess that if the plant seems to be operating, say, 4% under capacity, it may have about 400 bad tubes.

The only alternative is to laboriously check each tube by hand, an odyssey that can take months.

Now, the U.S. Department of Energy's (DOE) National Renewable Energy Laboratory (NREL) has available for license a device called Thermal Scout that can identify and analyze bad receiver tubes as fast as a car or truck can rumble down the rows of mirrors at a CSP plant.

Thermal Scout combines a global positioning system (GPS) on the roof of a car, an infrared camera in the back seat, and some sophisticated software that tracks and analyzes in real time. All the driver has to do is push a couple of buttons, then drive in a very straight line down the rows while Thermal Scout does all the rest of the work.

For the 40 multi-megawatt CSP plants in the world today — and the 28 new ones slated to be built by 2014 —Thermal Scout could mean turning a months-long task into a two-day sprint. 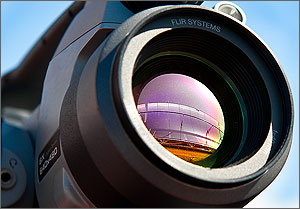 The infrared camera used in Thermal Scout can identify and analyze bad receiver tubes at the speed at which a truck can rumble down the rows of mirrors at a CSP plant.
Credit: Dennis Schroeder

NREL Senior Engineer Tim Wendelin started working on the concept a decade ago when leaders in the parabolic trough industry explained to him the importance of being able to characterize the performance of their receivers in the field.

Wendelin combined an infrared camera with a precise GPS unit and software to produce a device that provided shortcuts to the old, labor-intensive method of checking each tube manually. But it was still cumbersome.

He credits his NREL colleagues Allison Gray and Benjamin Ihas with bringing real-time analytics and user-friendliness to the device, which they dubbed "Thermal Scout" in 2011.

"They brought it into the 21st century," Wendelin said. "Now, it is so smooth and easy to use."

At a CSP plant, the sun strikes mirrors that heat up a fluid that turns water into steam to turn turbines that generate electricity for homes and buildings. The heating fluid is enclosed in a black-coated stainless-steel tube — the receiver. The receiver is surrounded by a glass tube and a vacuum that minimizes thermal loss. The infrared camera in Thermal Scout focuses on that glass tube.

The GPS device ensures that even with slowdowns or potholes, the camera captures the image of that glass tube as the vehicle wheels down the row of receivers.

"The beauty of Thermal Scout is that it's used in a consistent geometry," Wendelin said. "The receivers are all in rows, and it can snap a shot of each one of them."

Receivers are designed to last for decades, but something as simple as a rock sent flying by a passing vehicle can compromise the tubes and let in outside air. Or, the thermal fluid that passes through the tube can degrade over time, causing a buildup of hydrogen between the steel tube and the glass. Earlier generations of receivers weren't built quite as well and may have shorter lifetimes compared to today's receivers. 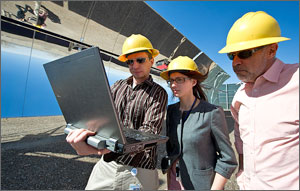 NREL Senior Engineer Tim Wendelin, right, started working on the concept of Thermal Scout a decade ago to try to characterize the performance of the receivers in a CSP plant. NREL engineers Benjamin Ihas, left, and Allison Gray, center, enhanced the concept and made it user friendly.
Credit: Dennis Schroeder

Thermal Scout users start with NREL-developed software that asks them to define the row geometry and specify the number of rows, something they only need to do once. Users also need to input the temperature of the fluid as it enters a row of receivers and its (higher) temperature when it reaches the end of the row.

Armed with that information, the infrared camera — with the help of the GPS — knows when to snap to capture thermal images of each receiver.

The GPS device is on top of the car, the infrared camera mounted on a tripod in the back seat.

The driver clicks "Start Test," the software fine-tunes the camera to get the right focus, and the driver starts moving.

Thermal Scout can operate well at 25 mph, but most plants have a 10-mph speed limit to keep road dust from landing on the mirrors or receivers.

If a passenger is interested, he or she can watch a video on the left side of the screen and still images on the right. At the bottom is a real-time plot of the average of the peak temperatures.

"The software will find the highest peak temperature, which in our case is always the receiver tube," Ihas said. "It can take 100 slices and run a statistical analysis to make sure there are no strange artifacts giving a false reading."

For example, if the camera captures a metal joint or the sun's reflection on the bottom of the tube, eliciting a temperature way above the norm, that anomaly is filtered out of the equation.

Later, when plant operators analyze the data, they can see, for example, that receiver 35 in row 12 showed some higher temperatures. They can retrieve the images from that specific receiver and verify — or not — that the tube is indeed malfunctioning or running a little warmer. 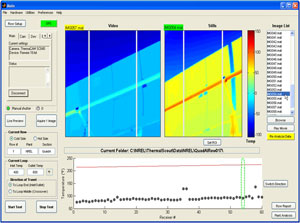 Thermal Scout's data acquisition interface. The left screen is a video image with the mirrors in blue and the tube in lighter blue. On the right is a still shot with the tube in orange. Below, a series of dots shows which tubes are at an elevated temperature. Data can be read in real time or saved to be analyzed later.
Credit: Dennis Schroeder

The latest enhancement of Thermal Scout is built-in data analysis, which has been streamlined and made intuitive for users.

Click for a row report in Thermal Scout, and a Web page is generated that can be shared with anyone at the plant. Click to "acquire one image," and that image can be examined in detail, now or later.

Another click, and a complete data analysis for a row, a series of rows, or the entire plant appears on the screen.

"Thermal Scout can very quickly identify a hot receiver, including the row, the number, the glass temperature, and where to find it," Ihas said.

Every line of pixels is a line of data, Gray, an NREL engineer, noted. And NREL can help troubleshoot problems remotely.

Of course, it's up to plant operators to decide when to replace the problematic receivers — when a few are bad, or when dozens or hundreds are bad. A row of receivers can be shut down overnight, and a few replaced by the time the sun rises the next morning. Still, it's a laborious job, so the plant uses its own discretion on what failure rate warrants replacement of receivers.

A recent test of a five-year-old plant found that about 5% of the receivers were performing poorly or starting to waver, Ihas said.

"Thermal Scout would likely be used every two years or so at a large CSP plant, unless something happened to the output that warranted more frequent checks," Gray said.

"There's probably a threshold where they would say, 'We need to address this; we need to replace some receivers,'" Wendelin added.

Florida Power and Light, which installed early-generation CSP receivers, used an early version of Thermal Scout several years ago to quickly assess their tubes and determined that it made the most fiscal sense to replace them all. "They never would have been able to make that determination without Thermal Scout," Wendelin said.