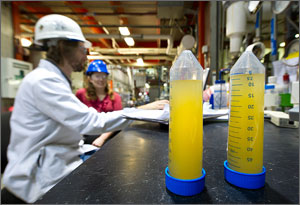 Recently, a team of scientists from Cobalt Technologies assembled at the U.S. Department of Energy's (DOE) National Renewable Energy Laboratory (NREL) to supersize their process for making renewable butanol.

Cobalt had proven in the lab that its anaerobic microorganism could take organic feedstocks and convert them into biobutanol. Butanol is valued as an industrial chemical — used in plastics, paints, adhesives, and inks — and, through a Cobalt-U.S. Navy process, can be made into jet fuel. It is also seen as a drop-in replacement for petroleum-derived fuel blending.

"We've been developing a bacterial fermentation process in order to build commercial biobutanol plants," Cobalt's Senior Director for Research and Development David Walther said. "One of the key milestones is demonstrating our fermentation process at larger and larger scales in order to minimize the risk for ourselves and our partners. NREL has a unique combination of scale and staff capability that we wanted to tap into; it really allowed us to do demonstration work in a timely and cost-effective manner."

Cobalt's team was able to leverage NREL's Integrated Biorefinery Research Facility (IBRF) for their scale-up testing. The facility is unique in its ability to handle a wide range of feedstocks and fermentation processes. The IBRF's equipment can support industry partners looking to evaluate new technologies in a demonstration-size facility. For companies like Cobalt looking to collaborate with NREL, the facility's fermentation capabilities and labs can be reconfigured to meet any project's needs.

"NREL is dedicated to advancing the cleantech industry and continually looks for ways to help firms and research groups leverage their intellectual capital and bring cost-competitive products to the marketplace," NREL's National Bioenergy Center's Team Leader for Partnership Development John Ashworth said. "Our bioprocessing fermentation facilities can be used by non-DOE academic institutions and companies like Cobalt to conduct test trials, prove technology, or even advance and optimize technology processes."

The IBRF's flexibility was key for this project, as this was the first butanol run in the fermentation areas of the IBRF, which were originally designed for cellulosic ethanol.

It was also the first major fermentation work-for-others partnership since DOE had invested $33.5 million in IBRF facility upgrades. 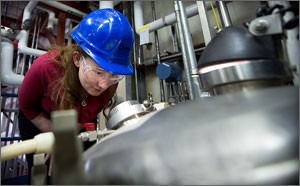 Erin Fetsch, senior scientist for Cobalt, looks into a production fermenter at NREL's IBRF. NREL hopes that more companies will bring their scale-up challenges to NREL so that both sides can learn from the process.
Credit: Dennis Schroeder

When the Cobalt team first visited NREL, they discussed with NREL staff their procedures for culturing their microorganism so it could produce butanol at larger scales.

"This was something they've never done before," NREL Scientist Andrew Lowell said. "They brought in their lab-scale protocol, procedures, and data, and asked us to help make it work at 9,000 liters."

"It was a close collaboration because they know how their organism works; even when it was in our fermenters, having them alongside us was helpful because there were things we'd never seen before, and they could offer their expertise on how their organism behaves. There are a lot of subtleties when moving from a few liters to several thousand. But in the end, it worked out really well," NREL Senior Research Scientist Nancy Dowe said.

The organism was put in the hands of NREL staff and was grown up from a small vial all the way to being able to inoculate a 9,000-liter butanol run.

Adding another level of challenge to the project was the fact that some of this work was done from computer-modeled data that Cobalt provided for butanol recovery. "We had to adapt our equipment, which was used for ethanol recovery, to butanol. But the computer modeling gave us parameters to work with," Dowe added.

"We found that the scientists at NREL are eager collaborators," Walther said. "This was something different for NREL, so we had to develop and refine some processes we'd done on a smaller scale. The technical capability of the staff at NREL is very high, so they were able to adapt quickly to wrinkles or changes in the process."

Learning at All Levels 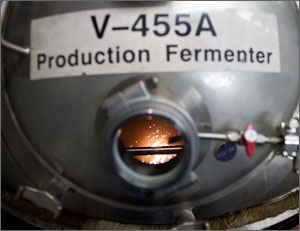 NREL proved its versatility and flexibility in its collaboration with Cobalt, as this marked the first time that a strictly anaerobic microorganism was put through the lab's IBRF.
Credit: Dennis Schroeder

Although companies such as Cobalt come to NREL for its expertise — in this case, scaling up biofuels production — NREL scientists also benefit from working with new feedstocks, organisms, and drop-in fuels.

Options for drop-in fuels are a DOE focus. Less than a year ago, the U.S. Departments of Agriculture, Energy, and Navy joined forces to invest up to $510 million, over three years, to produce advanced drop-in aviation and marine biofuels. Cobalt is also working with the Navy to process its bio n-butanol into renewable jet fuel.

"This whole run showcased our expertise and that we are not just a corn-stover-to-cellulosic-ethanol facility," Lowell said. "We can do a lot of different things and can be a very versatile facility."

NREL's versatility and flexibility were proven in that this was the first time that a strictly anaerobic microorganism was put through the IBRF.

"This project stretched us in terms of the type of organism, the feedstock, and the procedures that had to be developed," Dowe added. "Now that we have this under our belt, we've had other companies who have approached us and want to work with us to develop their anaerobic microorganisms."

The NREL-Cobalt collaboration was successful for the company, as well. According to Cobalt, the fermentation demonstration validated the ability of Cobalt's organism to achieve commercial performance metrics at larger scales. It also confirmed that their process to produce renewable n-butanol is 40% to 60% less expensive than production of petroleum-based n-butanol.

"We were pleased with the results," Walther said. "We have been conducting demonstrations for our biomass-to-butanol pathways and are moving rapidly toward the construction of commercial-scale facilities. These demonstrations have given our partners some added comfort in the scaling up of the process and production organisms."

This is exactly the type of scale-up story that NREL planned to support with its IBRF facility upgrades — and the lab hopes that more companies will bring their scale-up challenges to NREL so that both sides can learn from the process.

"This is a role that NREL and the IBRF can play for start-ups that aren't able to invest in this kind of equipment," Ashworth said. "We've been working with these types of processes and materials for more than 20 years. We have the ability and staff to do the analytical work, material handling, pretreatment, saccharification, and understand the implications for fermentation. We can save these companies a lot of work if they choose to partner with us, because we have all of this experience in one place."