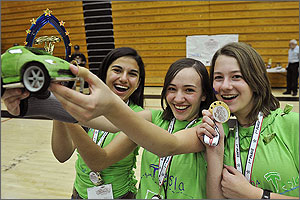 The buzz inside Dakota Ridge High School's gym on Saturday was palpable, the conversations ranging from whispers to shrieks.

Forty-five seconds before start time, seventh-grade boys raced to the repair table to solder metal parts together. Minutes after a time trial, eighth-grade girls had tweaked their designs and were ready for another heat, determined to shave a few seconds off their best time.

Parents smiled on the outside, butterflies churning on the inside. Coaches rounded up their teams; team members scattered to plot strategy or climb the wooden bleachers.

This wasn't your grandfather's mini-car race.

And to win, place, or just see solid improvement meant the world to participants in 104 teams from 23 Colorado schools. 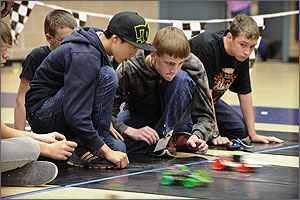 Cradling her hydrogen-powered model car like it was a baby chick, Naia Tenerowicz, 13, beamed in delight Saturday afternoon.

Her team's car, "Tommy the Tesla," had just finished first in a time trial, and its shape, engineering, and overall cuteness made it a favorite for the design award.

"It's made out of floral foam, the stuff you stick fake flowers into," Naia, a student at Woodlands Academy in Castle Rock, said. "It's really powdery, and you can squish it into shape easily. We spray it with sealant and then with white and green spray paint. And by then it's elastic and rubbery and a lot tougher."

The hydrogen fuel cell cars must use the standard cell sold by Numeridian, as well as a provided motor, electrolyzer, and battery pack. The rest of the design — chassis, wheels, shape, etc. — is up to the teammates, but the finished car can't be more than 20 centimeters wide or 40 centimeters in length. And to win a speed trophy, it had better get down the 10-meter track in about five seconds.

The solar-powered cars must use one of two designated solar panels, must be less than a foot wide and two feet long, and must be ready to switch to AA batteries on a cloudy day — like Saturday. The cars race 20 meters down the neoprene track, hooked via eyelet to a taut guide wire to stay in a straight line. 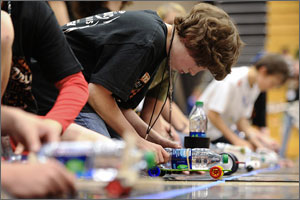 This was the first year for a third design — the lithium-ion battery. Competitors used batteries, motors, connectors, and chargers provided by Horizon Hobby. Their races were won or lost by how well a team designed the rest of the car and how ingeniously they designed the compartment to carry extra payload — a 20-ounce water bottle placed on the chassis to provide stabilizing weight.

The winners of the inaugural lithium-ion race were from Fitzsimmons Middle School in Bailey, with a car named "Rage," which blazed to the finish line in just a beat over five seconds.

"We don't really have a captain, but Todd is the bossiest," Fitzsimmons team member Jeffrey Brown said.

Todd Bramblett cheerfully agreed. "Last year we went for a straight triangle, but this year we had a contest for the design that was the fastest, and we went with this one," which looks like a Gothic knife handle, Todd said. "I guess it worked fine."

The team credits a decision to put wide rubber bands on the rear wheels for the extra traction that gave them the victory by a few hundredths of a second.

Todd ranks the win as his second-greatest life thrill, right behind the motocross time trials he won when he was younger.

Todd, Jeffrey, Brian Wismar, and Justin Boline said they're interested in football, baseball, and other sports, but that in the long run they can see future careers in engineering or physics. They worked three hours a week for several weeks on the car, which will soon find a permanent place in their school's trophy case.

Woodlands Academy had a day to remember. It finished one-two in the race for the fastest solar-powered car with "Speedy Mercury" and "Perry the Platypus."

Its "Bobby the Bottle Rocket" won a first-place trophy for design in the lithium ion category, based on technology, craftsmanship, and innovation. And "Tommy the Tesla," the car Naia Tenerowicz cradled like a baby chick, came in first in design for the hydrogen fuel cell cars.

Students Have Stars and Science in Their Eyes 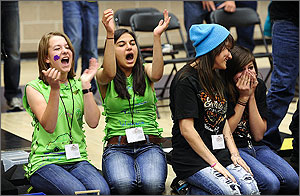 Asked if this was their only interest, the trio laughed and said in unison, "We do everything."

"Legos, robotics, and all three of us were in theater," Yasmine said.

If they had to choose between an Academy Award for Best Actress and a Nobel Prize in Physics?

"Nobel Prize in Physics," Yasmine and Grace said without hesitation.

Wait 'Til Next Year

After the races and the awards, teams gathered their cars and their parts. Parents put arms on shoulders and said, "You'll do better next year," and "Are you kidding? You did great."

With the tracks rolled up and stored for the 2013 competitions, race starter David Ginley, a world-renowned scientist from NREL, took time to reflect.

"It was great. I think we're changing lives," Ginley, who has won five R&D 100 Awards for scientific innovation, said. "High school is sometimes too late; elementary school is too early. But right now, when they're in sixth, seventh, and eighth grades, something like this can really provide a spark.

"I've been doing this long enough that I've seen kids who've participated in these races, gone on to get internships at NREL during college, then come back as post-docs, making a career of it," he said. "It's very gratifying."