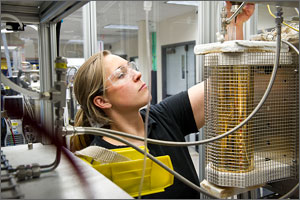 We live in a petroleum-based society, and the oil we use comes from plants that were buried eons ago and changed under pressure and high temperatures. As countries across the globe face dwindling oil supplies and the environmental impacts of tapping hard-to-process shale oil, the question arises: is there a greener way to replicate Mother Nature?

Researchers at the U.S. Department of Energy's (DOE) National Renewable Energy Laboratory (NREL) are looking for ways to thermochemically treat biomass to arrive at an end product that is similar to oil. One way to get there is through a process called gasification. Gasification takes biomass and heats it with steam and air to produce synthesis gas, or syngas. Syngas is a mixture of hydrogen and carbon monoxide — the building blocks of fuels and chemicals. After the syngas goes through another catalytic process, it is possible to make almost any type of related fuel or chemical.

But copying Mother Nature is rarely easy. During the syngas process, tars and other undesired components are also created. These tars can foul the refining process and must be removed from the syngas before the fuel-synthesis step. NREL has patented a fluidizable tar reforming catalyst that converts tars into additional syngas to make thermochemically derived biomass syngas ready for fuel synthesis.

"In the end you want to create something that's going to look just like gasoline, with a cost similar to gasoline, but that is derived from biomass," NREL Principal Scientist Kim Magrini said. "There is an added benefit to this process because you are taking biomass, which has carbon in it, and putting it into your fuel, which gets combusted into carbon dioxide — which is food for future biomass. If you look at the life-cycle analysis, it has a greater than 90 percent closure on the carbon loop."

In fact, thermochemically derived fuels have a number of benefits. The flexibility of thermochemical processes, such as gasification and pyrolysis, provides cost-effective options for manufacturing cellulosic ethanol and advanced biofuels. Often called "drop-in" fuels, these advanced biofuels are compatible with the existing fuel infrastructure, which will speed commercial adoption. And, as Magrini noted, advanced biofuels produced via thermochemical conversion could significantly reduce greenhouse gas emissions.

Hydrogen and Pyrolysis Got the Wheels in Motion 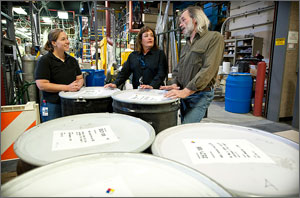 Pyrolysis is the process of heating biomass in the absence of added oxygen and at temperatures lower than those used in gasification. It breaks down the biomass and produces an oil-like liquid called pyrolysis oil. Pyrolysis oil, with treatment, can also be refined into greener transportation fuels.

"Pyrolysis oil is analogous to petroleum oil, although it is chemically different," Magrini said. "Once you form the pyrolysis oil, you can do a variety of things with it, like upgrade it into fuel-like intermediates that can go into the existing fuel structure. Or, you can reform the aqueous phases and get hydrogen. When you do this, you need a catalyst that breaks down the components into hydrogen and carbon monoxide. The problem was that the catalyst that can do this reaction gets fouled in the process.

"Commercial catalysts wouldn't work; they are made for use in a fixed bed, which is a packed bed of catalysts that you run the materials through. We had to find a fluidizable material that moves around in the reactor and provides more efficient contact of the liquid with the catalyst."

The NREL team was successful in creating a catalyst that worked. The next idea was to take this reforming catalyst, designed for getting hydrogen, and see if it could be used to reform the tars that result from biomass gasification.

"The answer was, yes, we could," Magrini said. "It worked quite well. But the problem with this process was that when you gasify biomass, sulfur compounds from proteins are produced from the biomass. Those compounds deteriorated the catalyst because it is nickel on aluminum, and nickel readily reacts with sulfur."

NREL Turns to CoorsTek for Support

Magrini's team, including NREL's Yves Parent, Steve Landin, and Marc Ritland, identified the need for the catalyst to reside on a better support. The commercially available materials NREL tried simply fell apart in the reactor — so NREL staff enlisted the help of a Colorado neighbor, CoorsTek, to further refine the catalyst support so it would work in the fluidized bed of a gasification reactor.

"Almost everything we make at CoorsTek is custom; we engineer solutions to meet people's needs," CoorsTek Research Manager Steve Landin said. "The challenge for our work with NREL was to get the right size, composition, and surface area so the material didn't wear too much in the fluidized bed — it had to be damage tolerant."

The resulting catalyst support is made by taking all the raw materials and grinding them in water to form a high-solids solution. The particles in the solution are approximately one micron in diameter. The solution is spray-dried by atomizing the liquid in really hot air, forming droplets. The tiny droplets are little round pellets of ceramic; each one is formed when numerous particles from the solution adhere together. Then the material is fired, giving it strength, but the porous surface of the ceramic is not totally sealed, so the catalyst components — nickel, magnesium and potassium — can "soak in."

Once the support structure was identified, NREL created the catalyst by mixing a nickel, magnesium, and potassium salt solution with the support. When this is heated, a chemical reaction occurs and the catalyst components of the solution stick onto the surface of the support.

"So when you take the CoorsTek support and add our patented formulation, we can efficiently clean up the syngas for downstream fuel synthesis," Magrini said. "All that work comprised NREL's material patent because it didn't exist anywhere else in industry."

NREL's decade of work on this process will culminate in the summer of 2012 when a biomass-to-ethanol process will be demonstrated at pilot scale to show that the catalyst is ready for industry. 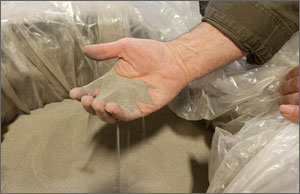 NREL makes its catalyst by mixing a nickel, magnesium, and potassium salt solution with a support structure created by CoorsTek. NREL's unique solution for a fluidizable tar reforming catalyst has been licensed by Rentech, Inc.
Credit: Dennis Schroeder

Just patented last year, NREL's unique solution for a fluidizable tar reforming catalyst has already caught the attention of industry and has been licensed by Rentech, Inc., a Colorado company with an NREL connection.

"One of our engineers developed a new reactor to condition syngas," Rentech Sr. Vice President and Chief Technology Officer Harold Wright said. "Our engineer was searching for an attrition-resistant fluidizable catalyst. Through the patent information and some of the articles that Kim Magrini and her coworkers had written, we believed NREL was developing a catalyst that would fit into that configuration."

Rentech was founded in 1981 by engineers from the Solar Energy Research Institute (NREL's predecessor). Rentech has been developing synthetic fuel technologies since the early 1980s and has advanced a technology to convert syngas from almost any biomass feedstock into diesel jet fuel and other drop-in fuels. In 2008, Rentech was awarded $23 million in American Recovery and Reinvestment Act funding from DOE to add a Rentech-ClearFuel biomass gasifier to its facility in Commerce City, Colorado.

"We are still working with NREL on the development of the catalyst," Wright said. "We are also working to build a demonstration-scale facility that would use that catalyst. And we've done pilot-scale work at a university to show the validity of the catalyst.

"For Rentech, this is a part of the commercial deployment of an overall suite of technologies that process any type of biomass feedstock put in to the reactor to produce final drop-in fuels. The combination of the NREL catalyst and our reactor really helps to improve the overall economics of that process."