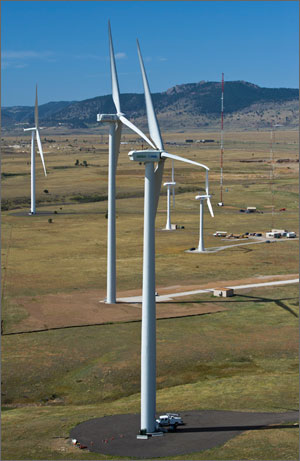 The most noticeable change at the NWTC in recent years is the addition of multi-megawatt wind turbines used for a wide variety of R&D activities in collaboration with industry partners.
Credit: Dennis Schroeder

The Front Range environment at the National Wind Technology Center (NWTC) is harsh. The winds — the very reason the NWTC is there — have little mercy. The frigid cold of winter gives way to the baking sun of summer. Yet in the midst of this difficult landscape, the future of wind energy grows bigger and stronger thanks to the work being done by the U.S. Department of Energy's (DOE) National Renewable Energy Laboratory's (NREL) NWTC and its industry partners.

Findings from a recent report by analysts from NREL and Lawrence Berkeley National Laboratory indicate that further technology improvements will be critical to increasing wind turbine efficiency and lowering the cost of wind power development in the future. Research at NREL's NWTC is leading the way.

Giant Turbines Tower over the Landscape

The most noticeable change at the NWTC in recent years is the addition of four multi-megawatt wind turbines to be used for a wide variety of research and development (R&D) activities in collaboration with industry partners. The most recent of the four new turbines, a Gamesa 2.0-megawatt machine (see inset), was installed at the site in late 2011.

"The addition of these four modern megawatt-scale machines has been truly transformational for our center," said Fort Felker, director of the NWTC. "Not just in the physical landscape, but in the depth and relevance of the research that is going on here. It's changed the way industry thinks about us in the sense that now the work we are doing is directly relevant, clearly impactful, and immediately beneficial to them."

Each of the four turbines is a test apparatus with unique attributes. For example, the Siemens 2.3-megawatt turbine at the site has extensive instrumentation and structural load measurement capabilities in the blades, nacelle, and down the tower all the way into the underground foundation beneath the turbine. This allows researchers to connect the entire path of unsteady loads caused by turbulence in the wind to better identify where improvements will directly lead to more efficient turbines and lower-cost wind energy. 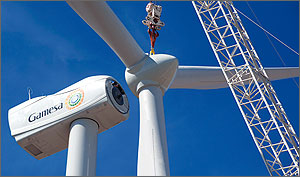 Crews lift a blade assembly onto the nacelle of Gamesa's G9X-2.0-megawatt turbine at the NWTC. The Gamesa G9X-2.0 turbine is the latest addition to the collection of multi-megawatt wind turbines at the NWTC.
Credit: Dennis Schroeder

The next sizable step into the future of wind energy is an expansion of the dynamometer testing capabilities at the NWTC. The new dynamometer facility scheduled for completion this summer will dramatically expand the capability of NREL and its industry partners to verify the performance and reliability of wind turbine drivetrain prototypes and commercial machines.

The new facility is capable of testing drivetrains up to 5.8 megawatts — large enough to test virtually any land-based turbine for the foreseeable future — and will employ a non-torque loading capability that is dynamically variable. This means researchers will be better able to simulate conditions a turbine might experience in the field.

"These new capabilities will make this a special facility, the finest of its kind in the world," Felker said. "Instead of just putting a steady load on a test article, we'll be able to better simulate dynamically variable loads that it would see in the real world." 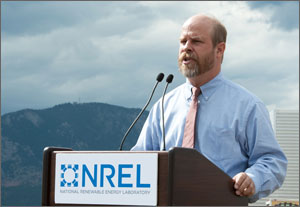 NWTC Director Fort Felker speaks at the groundbreaking ceremony for the new dynamometer expansion project. When finished, the facility will have a 5.8-megawatt capacity.
Credit: Dennis Schroeder

As turbines have grown, so have the blades required to capture the wind for them. Turbine blades have grown so much, in fact, that the NWTC, with its landlocked location, cannot effectively work with the largest blades because they are difficult to ship over land.

To solve this, NREL has partnered with the Massachusetts Clean Energy Center to develop a world-class large wind turbine blade testing center in Boston, Massachusetts.

The Wind Technology Testing Center (WTTC) offers a full suite of certification tests for turbine blades as long as 90 meters and is designed to help the wind industry deploy the next generation of onshore and offshore wind turbine technologies. NREL staff on site provides technical expertise and testing hardware at the facility.

The WTTC is located on an existing deep water port so that large blades can be shipped by boat to the site, allowing it to test the largest wind blades in development for both onshore and offshore use. 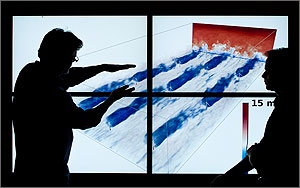 Another significant development for NWTC researchers has been access to high-performance computer resources now available for wind science and technology development.

A challenge in the wind industry has been how to tackle the interactional aerodynamics that occurs within wind farms, where large numbers of multi-megawatt wind turbines are placed together. The wind turbulence in the wake of upstream turbines interferes with the downstream turbines, which leads to higher structural loads and fatigue damage on the downstream turbines — resulting in increased maintenance costs and adding to the overall cost of wind energy.

NREL is taking on this problem using next-generation modeling capabilities that will allow researchers to use computer simulations to assess individual turbine performance as well as turbine-to-turbine interactions. The simulations will use RedMesa, NREL's 180-teraflop supercomputer.

"To date, there has never been a scientific analysis and simulation tool that allows us to tackle this problem. We've broken that barrier," Felker said. "It's a transformational capability, and we're really excited about it."

This work will create a better understanding of wind farm performance and will allow future wind developments to be designed in ways that will minimize this impact, from altering the layout of the turbines to more advanced engineering concepts such as using differently designed turbines in downstream locations as compared to those upstream. The result will be wind farms that are more efficient and less costly to operate, leading to less expensive wind energy.

A Big Future Ahead for Wind Energy

NWTC researchers are keeping their eyes on the future and how the center's increased capabilities will advance wind energy deployment at the lowest possible cost. Effectively working with industry partners is an important piece of this puzzle.

"We're very proud of the dramatic increase we have had in the depth of our partnerships with industry. That has been a tremendous success for us over the last few years," Felker said. "It has made us much better connected with the wind industry in terms of knowing what is important to them and how we can help them and be a key partner in their success."

The next logical step is to look offshore. Offshore wind resources allow for the deployment of even larger turbines that could not be considered for use on land.

"In the future, we're going offshore," Felker said. "Our biggest challenge and opportunity in the future is that as the U.S. begins to develop an offshore wind industry, all of the R&D skills and testing capabilities that we have developed can be brought to bear in the offshore world."

The latest addition to the collection of multi-megawatt wind turbines towering over the NWTC is a Gamesa G97 Class IIIA 2.0-megawatt turbine. The turbine was installed in late 2011.

NREL and Gamesa Technology Inc. will collaborate in a public-private partnership to study and test a variety of components and systems on the turbine, which will guide development of the next generation of wind turbines designed specifically for the U.S. market.

NREL and Gamesa will collaborate on work in three key areas: developing new wind turbine components and rotors; researching and testing the performance of new control strategies; and devising models that will help develop turbines for U.S. coastal waters.

Using Gamesa's turbine platform as a laboratory, researchers will study the behavior of systems and how new designs, products, or equipment can affect performance.

"We are pleased to have Gamesa working with NREL as an R&D partner," said Dana Christensen, NREL's Deputy Laboratory Director for Science and Technology. "These types of collaborations demonstrate a commitment to crucial technology development and the public-private partnerships necessary to ensure the continued momentum of the wind power industry. Our role with the Department of Energy is to help reduce technical risks and thereby help accelerate next-generation technology into the marketplace. NREL is proud to be at the forefront of this important work."

Since its introduction last year, Gamesa's G9X-2.0-megawatt turbine platform has gained recognition for its advanced blade design, updated nacelle, enhanced control systems, and other features that substantially increase energy output. The model installed at NREL is designed specifically for low-wind sites, a segment from which Gamesa expects more than half of all future onshore demand.

"Wind energy is going to continue to play a key role in creating a stronger and more sustainable American economy," said Miguel Angel Gonzalez-Posada, vice president of technology for Gamesa North America. "This partnership is an exciting venture that showcases Gamesa's commitment to enhanced clean energy development, as well as our drive to deliver reliable, efficient, and cost-effective wind turbine technologies to the U.S. marketplace."

Full project testing on the entire slate of programs is set to begin this month. The core provisions of the public-private partnership run through 2013, with options for two additional years of collaboration.