Success Comes in Twos at the 2012 Science Bowl 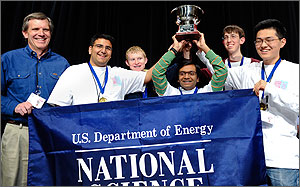 The stakes were high at the Colorado High School Science Bowl, hosted by the U.S. Department of Energy's National Renewable Energy Laboratory (NREL), as 27 teams competed for a shot to represent their home state in Washington, D.C., at the National Science Bowl in April. As the day wore on and the competition stiffened, it began to seem as if 'two-of-a-kind' was the right hand to hold.

After a full day answering rapid-fire questions in physics, math, astronomy, chemistry, anthropology and earth sciences, Cherry Creek High School scored a pair of dramatic victories in the final round to claim the Colorado championship and advance to nationals. Cherry Creek brought one loss into the final round of the double-elimination tournament against an undefeated Cheyenne Mountain High School team that appeared unstoppable. In order to claim victory, Cherry Creek had to beat Cheyenne Mountain twice.

Team Proud to Be Returning to Nationals 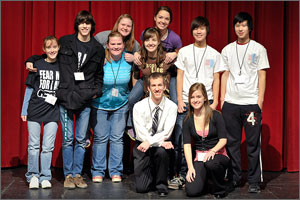 "Wow, that was intense," Cherry Creek team captain Rajeev Vishwamitra said. "We went up there with a lot of jitters. We knew how good they were, but we also knew that we could win. To beat them twice would be very difficult. We were trying to just stay focused on each question one at a time."

Cherry Creek returns to nationals for the second time in three years, when the current team members, all seniors now, were freshmen. "We were just bystanders then," Atul Tiwary said. "But all of us on this current team have been together since we were freshmen taking physics, chemistry and biology classes together. Seeing the team from three years ago, how they prepared, and being able to work together for such a long time really helped to motivate us and get us ready for this competition."

Members of the winning Cherry Creek team will start their journey for the national title in Washington, D.C., on April 26. The U.S. Department of Energy (DOE) and NREL sponsor the Science Bowl program to provide an opportunity for students to embrace science, technology, engineering, and math studies as a primer for collegiate success and future careers.

More than 15,000 students across the U.S. compete for a trip to compete at the National Science Bowl. Only about 500 make it. Students who participate agree that the competition enhances their understanding and appreciation of the sciences.

"This is a great way for students like us who are interested in science to get a chance to show what we know and to expand our own knowledge," Vishwamitra said. "It makes it more fun and keeps us focused. I'm fairly sure that everyone on this team will end up doing something science-related in the future, and participating in science bowl has helped to keep all of us engaged with that interest. It's also great to have a chance to meet and compete with students at other schools who have similar skills and interests."

Seeing Double on More than Just the Scoreboard 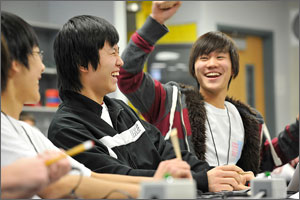 In addition to the exciting finish, the Colorado competition this year also was notable for an unusually high number of twins. Five sets of twins competed on the 27 teams.

For the team from Highlands Ranch High School, Science Bowl is a family affair. The team is anchored by twin brothers Thomas and Kevin Wu. Their coach is older sister Mengjie Wu, who was an intern at NREL in 2008. After-school practice sessions for the team were in the Wu family room.

"It was the first time for all of us and we really didn't know what to expect," team captain Thomas Wu said. "But we enjoy science and we enjoy competition so we expected that this would be good for us."

The Wu's Highlands Ranch team was impressive for being first time participants, finishing third and just missing an opportunity to compete in the finals. The Wu Brothers are juniors and their teammates are a sophomore and a freshman. Both teams that made the finals consisted entirely of seniors.

"We hope to be able to take what we have learned and come back even better next year. Hopefully, we will be in a position to be able to win next year," Thomas Wu said.

No school participating had people seeing double more than Pueblo's Centennial High School. Two sets of twins filled out the rosters of Centennial's two teams. Gina Rossi and Kalie Saathoff are teammates on Team 1, while their twin sisters Rachel Rossi and Karyn Saathoff are on Team 2. Practice primarily involved competing against one another. "Competing and practicing against each other has been no problem," Rachel Rossi said. "We're all best friends as well as sisters and we're all in this as a team trying to help each other."

Kalie and Karyn Saathoff were participating in Science Bowl for the third time this year. "We love it because it's a chance to do something different. Not many people do this, which makes it seem really special," Kalie Saathoff said. "It's a great opportunity to test yourself and find out how well you are retaining what you learn in class. And it's a lot of fun too when you on a team with your sister and your friends."

For more than 20 years NREL and DOE have been actively encouraging high school students to expand their knowledge of math and science through the Colorado Science Bowl.

NREL Research Fellow David Ginley has been involved for almost as long. "At least 15 years now, maybe closer to 20," he said.

It takes nearly 70 NREL and DOE staff and volunteers to organize the competition and run it on the day of the event. The staff involved hopes the Science Bowl nurtures the next generation of scientists and engineers. "There is a potential future crisis in getting young people interested in science and technology," Ginley said. "It is events such as these that act as the catalyst to help students make their decisions on what they want to study in the future. Our hope is that a lot of these students, based on the positive experience and positive feedback from participating in these events will make the decision to pursue a course of study in science or engineering. That is good for all of us."