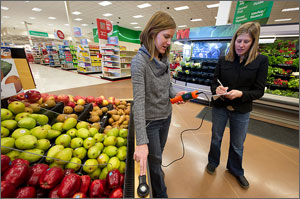 As the latest holiday shopping season ends, American retailers are gearing up for the next big event. Their brightly lit buildings will feature the latest sales and the energy needed to power eye-catching displays will be readily available.

Together, residential and commercial buildings account for a staggering 40 percent of energy use in the United States.

Although the power is always "on" for use in our country's buildings, the U.S. Department of Energy (DOE) and its National Renewable Energy Laboratory (NREL) are working with the nation's commercial building owners — from retailers to offices and warehouses — to discover new and innovative ways to reduce commercial building energy use.

The potential energy savings means a financial benefit for companies and consumers alike.

Good for the Earth and the Bottom Line 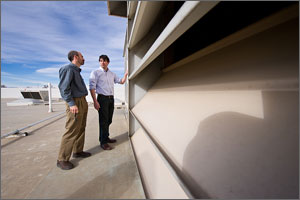 NREL Engineers Michael Deru, left, and Ian Doebber examine rooftop units at the Thornton SuperTarget. Through its CBP partnership with NREL, the store could potentially save more than 2 million kilowatt-hours of electricity.
Credit: Dennis Schroeder

"An underlying idea with CBP is to demonstrate that energy efficiency makes good business sense," NREL Senior Engineer Greg Stark said. "We are helping the companies develop better stores that use significantly less energy than their current prototypes — and for roughly same cost as their current buildings."

Consumers also could see a benefit from the work NREL is doing under the CBP program. According to researchers, a typical retailer needs to make upwards of $50 in sales to cover every dollar it spends on energy costs. Saving energy means savings for customers.

NREL researchers are taking a whole-building approach when looking at energy saving solutions for CBP members. "We are not just looking at individual technologies," NREL Senior Mechanical Engineer Adam Hirsch said. "In order to hit these levels of energy savings, companies have to take a multi-pronged approach."

"We work very closely with their design and engineering teams to brainstorm new efficiency measures," added NREL Project Lead Michael Deru. "Due to our enhanced analysis capabilities, we are able to provide better energy analysis — especially when it comes to analyzing those measures all across the country."

Coming up with energy saving solutions that can be repeated throughout the U.S. is a key CBP goal.

"It's important for us to work with these large companies because they can replicate the lessons learned across their building portfolios," Deru said. "Walmart is the largest private consumer of electricity in the U.S. And, because they are so big, they can make a large impact that ripples out into the industry by creating a marketplace for new energy efficient technologies."

"These retailers are cooperating and sharing information across industry," Deru said. "This effort can motivate manufacturers to make higher efficiency equipment, especially if they know these big companies are waiting to buy it." 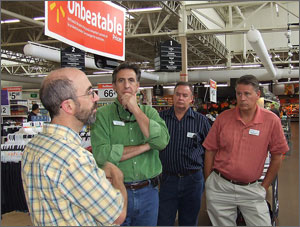 One retailer working with NREL is Target, the United States' second largest general merchandise retailer. "We worked with the engineering and design teams at Target to come up with a list of measures that would help them save energy at an existing Colorado store," Deru said. "In the end, we came up with solutions that exceeded the 30 percent energy savings goal for a retrofit project. "

If the actual savings in the Thornton, Colo., SuperTarget match the modeling results, each year the store will save more than 2 million kilowatt hours (kWh) of electricity and 3,300 therms of natural gas. But, coming up with such significant energy savings was a challenge for the NREL team.

"Target is very advanced on their own, which made this a tough project," Deru said. "As an existing building approaches 30 percent savings, it gets harder to find options that make economic sense. Target already is aggressive with their lighting systems. However, we were able to include incremental lighting improvements such as LED lights in their walk-in coolers, daylighting in the front of the store, and removal of additional lights.

"On the HVAC and refrigeration systems, we studied several options, ultimately recommending exhaust energy recovery units, evaporative condensers, variable speed fan control, and high efficiency replacement units. We also took a close look at plug loads and helped to implement turning off the drink coolers at night and putting their cash registers in standby mode when not in use. Ultimately, we were able to add another 7 to 8 percent savings on their overall savings."

Earlier this year, President Barack Obama announced plans for the Better Building Initiative, which set a national target of improving energy efficiency in commercial buildings by 20 percent by the year 2020. Just this month, the president announced that nearly $4 billion in combined federal and private sector energy upgrades had been secured through the Better Buildings Challenge.

The Better Buildings Challenge is administered by the U.S. Department of Energy, and NREL is supporting the program through NREL's Commercial Building Partnerships (CBP) work.

"Much of what we do for CBP is directly transferrable to the Better Buildings Challenge, and we are working closely with the Department of Energy to ensure that the materials we develop can be leveraged by the wider challenge audience," NREL Senior Engineer Greg Stark said. "For example, when we work with one grocer, we capture the lessons learned so that all grocers that participate in the Challenge can use our work to improve their operations."

When the CBP program began a few years ago, it was mostly DOE and lab employees doing the work. Now, in an effort to share knowledge with industry, the teams are bringing in third-party design and engineering firms to help with projects. In this case, NREL, Stantec, and CTA Architects Engineers are working with Walmart to design a new store outside of Dallas.

"As part of CBP we are testing ideas that have been part of the NREL's Buildings work for a long time," Hirsch said. "We put out design guides with recommendations for hitting these advanced energy savings levels. Now, working with industry, we can test those out and see how they match up with the needs of companies' business models."

"NREL clearly has done a lot of work on big retail projects, including looking at commercial refrigeration energy savings, which is a big part of one of the facilities we are currently looking at," added Stantec Associate David Okada.

According to Okada, other solutions on the table for the Walmart project include putting doors on as many of the refrigeration cases as possible and reducing lighting energy.

"It's been an enjoyable process to work with people who have pushed the envelope very far when it comes to energy savings," Okada said. "It's also great to be involved with pushing the savings to the next step."