New Lab to Help Utilities 'See' Grid of the Future 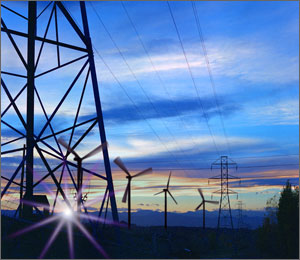 Power generation technologies such as wind and solar are gaining market share, while at the same time they are introducing an uncertain wrinkle into the old reliable power grid — variability.
Credit: NREL photo illustration

With the simple flick of a light switch, you are connected to "the machine."

The North American electric grid — the world's most complex transmission and distribution system — also is referred to as the world's largest machine. That same machine has run reliably on coal, natural gas and nuclear energy for decades.

Now, it's time for a tune up. Newer power generation technologies such as wind and solar are gaining market share, while at the same time they are introducing an uncertain wrinkle into the old reliable power grid — variability.

The new Energy Systems Integration Facility (ESIF) at U.S. Department of Energy's (DOE) National Renewable Energy Laboratory (NREL) is tackling the challenge of keeping the power grid running reliably while at the same time introducing a host of new technologies into an already complex system.

According to NREL's center director for Electricity Resources and Buildings Integration, David Mooney, the grid has operated essentially the same for more than 50 years. Utilities know how to predict energy demand by looking at the day of the week and the weather forecast. Then, utilities dispatch generating sources (usually from coal or natural gas) to meet expected demand.

"It was a pretty orderly way to operate a system," Mooney said. "Today, there are a lot of technologies coming online — including wind and solar — that are going to require a transformation in the way this orderly system gets operated. Now instead of only having variability in the electric demand, we are also introducing technologies that make the generating supply variable as well."

Renewable Energy Already is Connected — Or Is It? 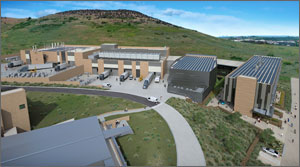 An artist's rendering of the Energy Systems Integration Facility looking from west to east.
Rendering Courtesy of SmithGroupJJR

For the homeowner with photovoltaics (PV) on her roof, or the technician working a wind farm in Texas, this may seem moot. Their technologies already are connected to the grid and the electrons seem to be flowing seamlessly.

However, these types of renewable energy systems still make up a small fraction of America's overall energy generation. According to the latest data from the U.S. Energy Information Administration, power generation from renewables such as biomass, geothermal, solar and wind have so far accounted for less than 5 percent of the total U.S. power generation in 2011.

Connecting that small amount of renewables into the power grid is not a big deal. "If you have 1,000 homes and five to 10 percent of those add solar, the variation and the output of the PV is in the noise of the grid," Mooney said. "Right now, utilities view PV systems in small numbers as a demand reduction technology — no different than people switching to compact florescent bulbs. But, if 50 percent of those 1,000 homes have a PV system, then the output could start to look more like a generating technology to the utility. Once it reaches those kinds of numbers, the utility has to start worrying about things like variation in cloud cover that cause PV output to vary."

"As all of these new technologies become cost effective, they are starting to get used a lot more and utilities ask, what's the best way to integrate these variable technologies while maintaining a safe and reliable electric power system?" NREL's Director of Energy Systems Integration Ben Kroposki said.

ESIF is the first significant DOE laboratory designed specifically to deal with the integration issue. NREL's researchers will be able to configure electric systems the way they would appear in the field and operate them at the same level of power as the utility uses. 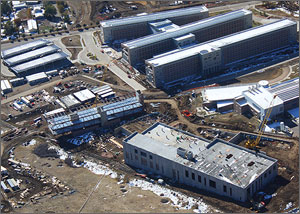 The ESIF now under construction on NREL's campus is expected to be open in the fall of 2012.
Aerial photo by Sincere/Duncan Studios courtesy of JE Dunn Construction

"We all know how we react when the power goes out, and the local utility usually bears the brunt of the PR problems associated with an outage," Mooney said. "So it is understandable that they are very conservative in how they go about adopting new technology. That is why the ESIF is so important for reducing that risk. The utilities will be able to operate new technologies in an environment that mimics the real system so they can work out all of the bugs of introducing new technologies beforehand and maintain the high reliability standards that we have all come to expect."

ESIF also will be a plug-and-play environment for industry. "ESIF is set up so that partners can bring in technologies — like a PV inverter or battery system — and we will have on hand the other equipment that the technology being tested would connect to. They don't have to go and try to find these complete systems," Kroposki said.

ESIF also will loop the utilities' hardware into a simulation environment so they can look at new technologies operating in a combination of real world, real power and simulated or virtual environments to see the impact that these new systems are going to have on the reliability and quality of the power.

"Once they try it all out in the ESIF, we believe the utilities will be much more inclined to adopt the technology," Mooney added.

Other key service and support features:

Another challenge for NREL researchers will include looking for ways to improve the grid itself. "For mostly economic reasons we can't build up a new grid and then switch over to it," Mooney said. "ESIF will enable us to look at how we can make the grid 'smarter' and more flexible to be able to receive technologies in a way that can maintain or even enhance the existing grid."

Many of the technologies on the grid are antiquated, and can be up to 50 years old. A "smart grid" has three components that the current grid doesn't have:

"People are surprised to learn that most utilities still don't know about a power outage until they get a call from a customer," Mooney said. "If we had a smarter grid, we would have sensors on transformers and power lines that would allow utilities to act preemptively if problems in power quality were arising so they could keep the power on. However, if the power did go out, utilities would be able to see it immediately and dispatch crews to minimize down time."

As the utilities put smarter technologies onto the grid, another avenue for energy savings is to have the grid communicate with a home energy management system so a home can work with a utility to manage power needs.

"The smart grid will offer the possibility of frequent, likely automated communication between a utility and a customer," Mooney said. "As a consumer, you will likely be able to know when the power is cheapest, for example, and have a plan with the utility that tailors your power consumption accordingly."

The foundations for a smarter grid are being laid today. In June, Secretary of Energy Steven Chu announced that more than 5 million smart meters had been deployed thanks to Recovery Act-funded efforts to accelerate modernization of the nation's electric grid.

"To compete in the global economy, we need a modern electricity grid," Secretary Chu said. "An upgraded electricity grid will give consumers choices and promote energy savings, increase energy efficiency, and foster the growth of renewable energy resources."