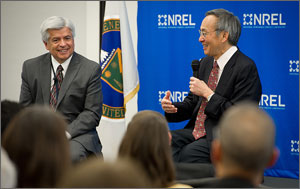 Seven trillion dollars are at stake in the global battle to win market share in renewable energy and the United States can win that battle, U.S. Secretary of Energy Steven Chu said during stops in Colorado.

Chu toured a GE-PrimeStar Solar plant in Arvada, Colo., on Nov. 18 that he said was a stellar example of American invention leading to American jobs. Later the same day, he toured the U.S. Department of Energy's National Renewable Energy Laboratory (NREL) in Golden, Colo. and spoke to a gathering of NREL and DOE employees.

At PrimeStar, Chu noted that the company adopted technology developed at NREL to build thin film solar panels made of cadmium and telluride. The technology can be more efficient than silicon solar cells and cost much less — because it uses 99 percent less chemical material than more conventional cells.

GE PrimeStar recently announced plans to build a large manufacturing plant in Aurora, Colo., which will employ about 400 people and build enough modules to power 80,000 homes.

Chu said that if the United States balks at helping private firms invest in the most exciting new renewable energy ideas, there are 50 other nations that will continue to do so within their borders.

In China, Canada, Australia, India, and most of the countries of western Europe, governments are making direct investments or guaranteeing financing — because they know the stakes are so high.

"We can accept defeat and watch the solar jobs go to China, Germany and other countries, or we can get in the game and play to win, creating jobs in Colorado and across the country," Chu said.

Chu noted that the United States still leads the world in solar innovations — the scientific and research work behind the most important breakthroughs.

However, the United States lost its lead in exporting solar equipment — China now has a 50 percent share, while the U.S. has dropped to 7 percent.

America Won Back the Lead in Air Transportation

There are precedents in America for technologies that were invented here, usurped by others, and then won back, Chu noted.

The Wright Brothers invented the airplane, but within 10 years, Europe was building better planes and winning the market battle, he said.

"We didn't say, OK, we invented it but now we're waving the white flag," he said. "No, we said, 'we'll win back this technology.' And we did it.

"Just like with the airplane, we can and should win back the market lead in renewable energy." 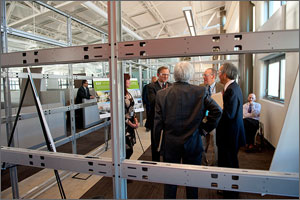 Innovations such as PrimeStar's that are more cost efficient and energy-efficient can make U.S. manufacturing an attractive alternative to shipping that work overseas, Chu said.

In 2007, PrimeStar signed a Cooperative Research and Development Agreement with NREL, which had earlier developed the cadmium-telluride technology on which the solar cell is based.

Now, the largest energy company in the world, GE, has taken a $600 million stake in that technology.

"Global business in renewable energy last year was $240 billion," Chu noted. "It's destined to grow by leaps and bounds. By 2030 it should be $460 billion a year.

"It's very important that we stay in this game," Chu said. "Is it a game we can win? Absolutely.

"Because of our technological edge, we can be competitive with anyone in the world" if research and development is funded adequately. 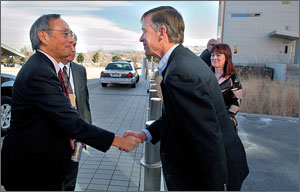 Chu toured the PrimeStar plant, then visited NREL in nearby Golden, where Colorado Gov. John Hickenlooper introduced him.

"NREL again and again has demonstrated that it is in the forefront of taking ideas and turning them into jobs, and improving the quality of life in Colorado, the nation and the world," Hickenlooper said.

Chu, who won the Nobel Prize in Physics in 1997 when he was director of the Lawrence Berkeley National Laboratory, said wind power now is virtually cost-competitive with fossil fuels, going for about 5 and a half cents per kilowatt hour.

Solar is still more expensive than that, but should reach price parity by the end of this decade or a few years beyond, he said.

It will get there because of investments in start-ups such as 1366 Technologies, a company that is using a brand new approach, akin to dipping a strawberry into chocolate, to make solar cells that are thinner and much more cost-effective.

"That's an example of American ingenuity," Chu said. "We don't know if it will work out or not. But it is a good enough idea that 1366 is already getting private investment.

"We haven't lost our stature in terms of our ability to invent and innovate," Chu said. "But when I see what other countries are doing in terms of support … we have to remember: 'Are we in this to win?'"

He says his priority now is to talk to "Democrats and Republicans to make sure we continue our strong investments in energy research. It is so important that we continue this research."

Before taking a look at the construction of NREL's new Energy Systems Integration Faciliity, where utilities will test their smart-grid capabilities, Chu told the NREL audience that industries as diverse as railroads, telecommunications, semiconductors and oil and gas survived and prospered because of government investment.

He said when he's asked how long renewable energy should continue to get some subsidies, he reminds that oil has had them for more than a century and jokes that renewables should receive subsidies but, "by no means for more than 100 years."

Some say that with the economic downturn this is not the time to invest in future energy, but Chu says it is the right time.

He noted that in the depths of the Civil War, Abraham Lincoln had the foresight to establish the land grant universities to make agriculture and the mechanical arts more scientific, found money for the transcontinental railroad, and established the National Academy of Sciences to assure that he was getting advice on military and domestic policy from the era's greatest minds.

"Of course, that last one, Lincoln insisted that the scientists give their help for no pay," Chu noted wryly.