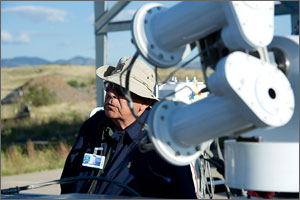 John Hickey, who developed the cavity for the first radiometer that went up in space, stands next to two automatic Hickey-Frieden Absolute Cavity Radiometers at the annual radiometer calibration event at NREL.
Credit: Dennis Schroeder

Under a partly cloudy sky overlooking grassy mesas, dozens of cylindrical instruments point toward the sun above the Colorado prairie.

It's the 16th NREL Pyrheliometer Comparisons at the U.S. Department of Energy's National Renewable Energy Laboratory (NREL), an annual get-together of the most precise radiometers on the globe and the sun-hatted men and women who take care of them.

At that moment each instrument records a measurement of direct irradiance from the sun. And then 20 seconds later another reading, then another, every 20 seconds until 37 readings have been recorded.

And that's just a sliver of the measurements needed to verify that each instrument is capable of providing honest, reliable measurements of the sun's energy at any moment anywhere on the globe.

Instruments Must Trace Reliability Back to World Standard 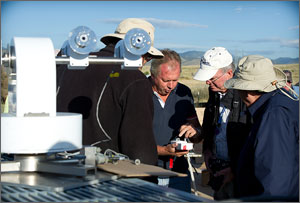 "It's all about traceability," NREL group manager Tom Stoffel said during a cloud-inspired break in the action. It's essential that each of these instruments be calibrated to ensure that they're starting from the same reference so that their measures of direct normal solar irradiance, recorded in watts per square meter, can be trusted.

"If I buy 10 pounds of potatoes, I want to make sure that it really is 10 pounds, or the equivalent in kilograms," Stoffel said. "That's why there are international measurement standards.

"We have an international standard for the measurement of the sun, too. The unit of measure is watts per square meter." Accurate solar measurements are important for many applications, including measuring the efficiency of photovoltaic (PV) systems: energy produced divided by available solar energy.

NREL is the only place in the world that holds an annual gathering for radiometers to get recalibrated. Every five years, the instruments and their keepers journey to Davos, Switzerland, home of the World Radiation Center, to ensure that their annual calibrations are on track with the World Radiometric Reference (WRR). So, any agency with a radiometer that gets its calibrations from the annual NREL event has confidence that their instruments are directly traceable to the world standard.

"The WRR is the only internationally recognized solar measurement standard," Stoffel said. The yearly instrument comparisons help to maintain the traceability of our solar measurements to this standard, he said.

And that's crucial for researchers and others who track the sun, the solar industry, universities, the radiometer manufacturers, the agencies that are monitoring global climate change and, no less important, the bankers and venture capitalists who decide where to invest in solar energy projects.

Some of the instruments have been operating since the 1970s.

The instruments get old and the radiation measures can be affected by paint degradation, changing performance of sensitive electronics or a variety of other factors. But as long as they are calibrated to the world standard, and the adjustments made, they can doing the exacting jobs for which they were made.

"It's not rocket science," Stoffel said, standing next to a 1970s-vintage gold-colored radiometer. The venerable instrument uses a tracker and a pinhole to ensure that the instrument is pointed directly at the sun's center as it moves across the sky.

"We have a simple clock, a pinhole and a target," Stoffel said. "When the sun is out, you'll see the sun's image on this target. That's how you know it is aligned properly." The actual solar measurement is based on the ability to measure the heat generated by the sun as captured by a special purpose optical "cavity." The sensitivity of the cavity is calibrated with a known electrical power before making solar measurements. These instruments are called electrically self-calibrating absolute cavity radiometers.

"The goal here is stability and meticulous attention to detail," Stoffel said.

The gathering at NREL is scheduled for 12 days in the fall each year, during which they can pretty much guarantee they'll have the equivalent of three days of clear sunlight for taking the measurements, and will still have plenty of time for seminars, lectures and discussions. The talks range from calculating uncertainties to accreditation audits and assessing data quality from solar measurement stations.

A new research focus is to try to be able to forecast what will happen in the next five minutes, hour, or day ahead, so utilities can adjust how much power to generate — welcoming the extra solar energy if it is needed, diverting it if it is not.

It's All About 'Bankability' to Financiers 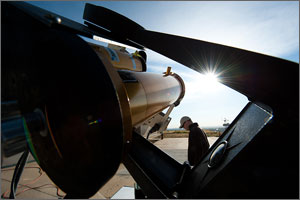 "Millions of dollars a day can be at stake based on the solar forecasts," Stoffel said. Developing and validating those forecasts depend on the availability of accurate solar radiation measurements. If the radiometers under predict the sun's potential, a promising project could be quashed. If they over predict, the project could face power production deficits.

Readings from the radiometer can help answer questions such as whether to use concentrating solar power or, say, flat panels, and ultimately whether the financials look rosy enough to give the go-ahead to start construction.

"How do you know when you've leased hundreds of acres from the Bureau of Land Management, and you're proposing a $30 million concentrating-solar-power plant, exactly how much direct sun are you going to get?

"This is all part of due diligence," Stoffel said. "The word is 'bankability,' how bankable are your calibrations? Before the bank actually signs off on it, it's going to want to know if someone came out and measured the fuel supply and whether the radiometer making those measurements had been calibrated properly."

Among the 25 participants at this year's NREL event were people from Lockheed-Martin and NASA, representing the space industry; scientists from Sandia National Laboratories; professors from the University of Oregon; meteorologists from the National Oceanic and Atmospheric Administration and the folks from World Radiation Center in Davos, Switzerland.

"We have most of the key manufacturers of radiometers from all over the world," Stoffel said.

Craig Webb, an electronic technician for the DOE's Climate Research Facility in Lamont, Okla. — its Atmospheric Radiation Measurement (ARM) program studies global climate change — was at NREL for the fourth year in a row.

"We have 25 sites in Oklahoma and Kansas, one site in Alaska, two in Papua New Guinea, one in Darwin, Australia," he said. "Our two mobile sites have been to China, Egypt, Germany, the Azores."

"We look at the sun and do cloud profiling," he said. ARM has 20 years of solar and atmospheric radiation data, currently taken every 60 seconds. They look for changes in particles, dust, water and vapor, indicators that the climate may be changing.

"They want everybody to be tied to the same base so we can measure accurately the watts from the sun," Webb said. "That's why we're here every year." 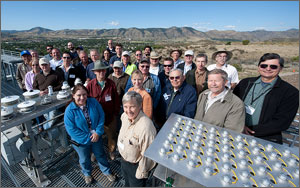 Inside each instrument is a cavity-like detector that traps the photons inside as they rattle around and convert their light energy to heat. The measure of the heat in that cavity elicits the precise radiation per square meter.

One of the men in a sun hat was John Hickey, who is long retired but who made many of the instruments at the 2011 Pyrheliometer Comparisons and who designed the first cavity-type radiometer to go into space.

Hickey, who worked at the University of Rhode Island and then for the Eppley Laboratory Inc., makes it to NREL every year that his health permits it.

"It's fun being back," Hickey said. "I have friends all over the world but the bulk of them are out here."

Hickey, who is 77, said scientists knew how to take radiation readings by the time he was born; it was just a question of putting all that understanding into an instrument that was reliable and sturdy.

A Quarter Century of Huge Improvements in Precision

Now, the gold standard is once-a-second updates at the exact spot where the solar installation is envisioned.

NREL has a solar calendar dating back to 1981 with a rich collection of data on the sun's radiation. The main display shows solar radiation for the day, starting with sunrise. They're looking for a smooth, arcing red line, which peaks at mid-day, but which doesn't have the wrinkles and the downturns that happen when water vapor, clouds and rain get in the way.

The measurements are halted when there are too many clouds in the sky. Even though the radiometers measure energy in all kinds of weather, the actual calibrations of the instruments work best when the photons can enter the radiometers in a steady flow, unshaken by water vapor from clouds.

Stoffel said this year's gathering was a resounding success. "We are pleased to see this year's record turnout," he said, noting that support from DOE's Office of Energy Efficiency and Renewable Energy is what maintains the international solar-measurement cooperation.