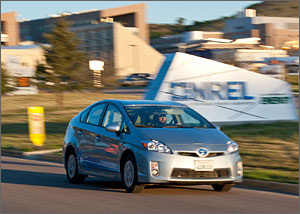 How things can change. The year is 1991. While working at CERN Labs, Tim Berners-Lee releases information on the Internet describing his invention, the World Wide Web, and WWW debuts as a publicly available Internet service. To help further set the stage for this story, consider:

The U.S. Department of Energy's (DOE) Clean Cities program and the National Renewable Energy Laboratory are celebrating the 20th anniversary of the Alternative Fuels and Advanced Vehicles Data Center (AFDC), which is today, an abundant online resource for alternative transportation information. The AFDC was created in 1991 as a repository for alternative fuel vehicle performance data in response to the Alternative Motor Fuels Act (AMFA) of 1988.  AMFA required the Department of Energy to start testing vehicles that run on alternative fuels such as ethanol, natural gas, and propane, and to make the results available to the public. 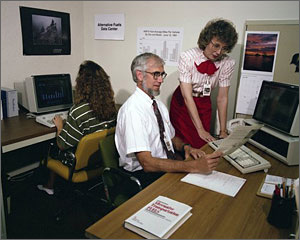 This 1991 photo of NREL staffers Rene Howard (left), Kevin O'Connor, and current employee Karen Guilbeault gives a flavor for how technology has changed since the launch of the AFDC.
Credit: Warren Gretz

"Some of the initial tools for the AFDC, like the station locator, were literally piles of paper on my desk," NREL Senior Project Leader Wendy Dafoe recalls. "I had to put that information into a spreadsheet and call and confirm that it was correct. That, along with some big data dumps from industry, started out what is the station locator now. There was no Web tool and no intention for us to push it out. We just wanted to know what was out there."

Early on, the AFDC functioned as a dial-up computer network that allowed users to submit data and access results. Users could also order technical reports and other documents via a telephone hotline.

"We had no idea what it would become," Dafoe added. "But, NREL staff Kevin O'Connor and Bob Wooley had a vision that we needed to track and store data over time, and transform it into useful and useable information for fleets. Now, it's a one-of-a-kind, publicly accessible website that provides robust, intuitive tools, data, and information about alternative fuels and advanced vehicles."

The AFDC used an ORACLE Relational Data Base Management System along with a software package capable of providing statistical, graphic, and text information to users. Then, as technology advances continued to accelerate, NREL launched the first AFDC website in 1995.

"We had the right group of people to put the building blocks in place," Dafoe said. "We didn't get ahead of ourselves. We understood the next step was identifying available vehicles or talking about fuel myths. Today, the building blocks are Web tools that fleet managers can use to see the cost of vehicles and what the incentives are." 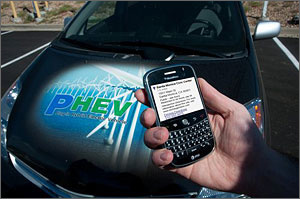 No longer tied to a computer or even a desk, data for alterative fueled vehicles can hit the road along with the driver thanks to the AFDC's Mobile Alternative Fueling Station Locator. The locator tells the closest biodiesel, electric, E85, hydrogen, natural gas, and propane fueling sites.
Credit: Dennis Schroeder

Fast forward to 2011. The mobile device that many of us carry in our pockets has computing power that greatly outpaces the desktop computers of the 1990s. What is now your phone, can browse a multimedia driven World Wide Web, can take photos, and gives you turn-by-turn directions to a meeting across town using global positioning satellites.

The AFDC website, as well as the data behind it, has expanded over the years, establishing the AFDC as an indispensable source of information for fleets, fuel providers, policymakers, consumers, and others seeking to reduce petroleum use in transportation.

"Now the Clean Cities program and the AFDC are growing into deployment anytime, anywhere," NREL project manager Johanna Levene said. "If you've got your mobile device, you can find the alternative fuel station that's closest to you."

Although pushing out mobile applications is a current focus for NREL staff, they are also working to educate buyers on picking the right fit for their needs.

"Alternative fuels are just like any other advanced technology, they can be the right solutions in the right place," Levene said. "We want people to have access to information and data that allows them to make informed buying decisions that reduce petroleum dependence. The information on the AFDC can arm buyers with information about light and heavy duty vehicles for their application and the fuel choices for those vehicles. It can help them understand the cost of infrastructure and what the emissions impacts of their choices are.

From the beginning, the AFDC was all about collecting and sharing data. It still is, just the names of entities using AFDC data — TomTom and MapQuest — are impressive. "We know that the information in the AFDC gets used by vehicle manufacturers, states, and non-governmental organizations in their research and on their Websites," Dafoe said.

In fact, the data requests have snowballed in recent years and NREL staff realized they needed to do something to automate some of the process. Last year, the staff added a data download feature on the AFDC website, which lets users download a flat file of station information. In a few weeks, the team will launch a new NREL subsite that provides data feeds for computer programmers to use as part of their mobile and Web applications. The first data set to be offered through the service will be a comprehensive, nationwide list of alternative vehicle fueling station locations from the AFDC. Developers will be able to retrieve the data through a Web services API (application programming interface).

"The cool thing about this type of Web service is the user doesn't have to store or maintain the data," Levene said. "The second we update it, it is updated on their website.

The obvious question is, "Where will the AFDC be in another 20 years?" Given how rapidly technology has changed in its first 20 years, staffers were hesitant to speculate, but AFDC Manager Trish Cozart did put the past 20 years into perspective. "The AFDC has stood the test of time. Celebrating the 20th anniversary is really a tribute to the ability of NREL and DOE to continually focus on delivering quality data and content and, at the same time, be forward thinking about the technologies available to deliver that content to the right people at the right time. We're poised and ready to meet the changing needs of the alternative fuel marketplace and take the AFDC out to the next generation," Cozart said.