Speed and Precision Keys to Large-scale Manufacturing of Solar Cells

When you're making millions of solar cells a week, the process has to be a combination of precision and speed. Full story.

Ink can cause a mess, but the Silicon Ink developed by Innovalight behaves itself so well that when it is added to a solar cell it doesn't clump or spill, instead it boosts the cell's power by a startling, profit-boosting 5 to 7 percent.

Both solar cells and T-shirts can be enhanced with a screen printer, some ink and a squeegee.

But it takes a real special ink to suspend silicon nanoparticles so uniformly that it can lay down the precise microns-thick lines needed to dope the silicon emitter exactly under the front metal contacts. Those contacts make a solar cell work.

Innovalight, a small start-up from Sunnyvale, Calif., came up with an ingenious way to suspend silicon in a solution without the tiny particles glomming onto one another or sinking to the bottom of the container.

But could that Silicon Ink prove useful for solar cells?

Researchers at the U.S. Department of Energy's (DOE) National Renewable Energy Laboratory (NREL) proved that the answer is "yes." And the winners could be the solar cell industry and the environment, because Silicon Ink, when added to the manufacturing process, can make solar cells more efficient and save a large plant hundreds of millions of dollars each year.

Impurities in Silicon Are Key to Making Contacts, Making Electricity 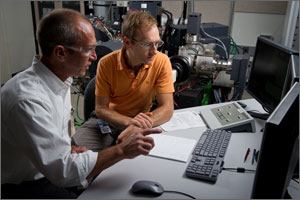 Silicon is the key ingredient in most of the billions of solar cells made each year worldwide.

Dopants or impurities are used to change the conductivity of silicon and to create the internal electric fields that are needed to turn photons into electrons and thus into electricity. One of the great challenges is to distribute the exact concentrations of dopants in precisely the correct locations throughout the device.

What Innovalight's potential customers and investors wanted to know was whether the ink can deliver high concentrations of dopants to extremely localized regions of the emitter and increase a solar cell's efficiency.

NREL Senior Scientists Kirstin Alberi and David Young listened to what Innovalight wanted to prove and then suggested some experiments that could help them prove it.

"The question was, 'can you print this ink in very well defined lines and drive in dopants only in the material underneath the lines to create a well-defined selective emitter," said Alberi, who began at NREL three years ago as a post-doctorate researcher. If so, the increased concentration of dopants right under the contacts would lower the resistance at the metal contact, while the rest of the cell contained low-doped silicon — and that would mean jumps in efficiency and savings of huge amounts of money.

"On some level, you want the emitter to be highly doped so it makes a better contact with the metal," Alberi said. "But if it's too heavily doped elsewhere, that's bad."

That's why a "selective emitter" that is heavily doped only in precise portions of a solar cell is such a promising technology.

The Ink Stays Put, Boosting Efficiency of the Cell 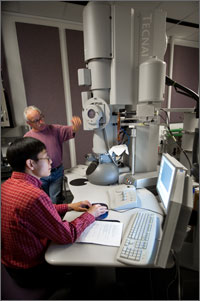 "They needed to prove this to their investors to show that their company was the best at doing this," Alberi said. "They didn't know how to go about proving this, and that's where we were able to help."

There wasn't a "Eureka" moment, but the dawning realization that the Silicon Ink was performing exactly as well as Innovalight had hoped was extremely gratifying, Alberi said.

"It was nice seeing that the results were exactly what they hoped they would be," Alberi said.

The scorecard: Silicon Ink, used in a low-cost screen-printing process, delivered a 1 percentage point absolute increase in the efficiency of the solar cells.

If that doesn't sound like much, consider that a typical silicon solar cell array in the field may convert 15 percent of the photons that hit it into useable electricity. That 1 percentage point increase actually represents a 7 percent increase in power output for a typical 15 percent -efficient cell — at a cost that is so low that it basically goes unnoticed at large solar-cell manufacturing plants.

"That's a huge impact for almost nothing," Richard Mitchell, NREL's lead investigator on the project, said. 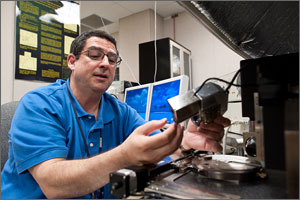 NREL Senior Scientist Helio Moutinho holds a probe to an atomic force microscope that is used to analyze samples by scanning capacitance microscopy. This technique was used to measure the variation in the doping concentration in different regions of Innovalight's silicon samples.
Credit: Dennis Schroeder

In the manufacturing process, the Silicon Ink spills onto a screen, a squeegee pushes it one way as the silicon wafers pass through, then pushes the ink the other way as new wafers appear below the screen. The Ink only reaches the cell at the precise points where a tiny slit in the screen's mask lets it get through. The slits are narrower than a human hair.

Every once in a while, a syringe adds some more Silicon Ink to the screen to ensure the spread is even and the liquid doesn't run out.

The tests proved that the ink stayed put.

Once the silicon and the dopants are where they should be on the unfinished cell, they are heated — not enough to melt them, but just enough to drive the dopants contained within the Silicon Ink into the solar cell.

"Kirstin and the others helped Innovalight prove they can actually get the right kind of selective doping in the areas they need," Mitchell said. "This is the first technology that showed that exactly where you print is exactly where the cell gets doped — to a precision of a micron." 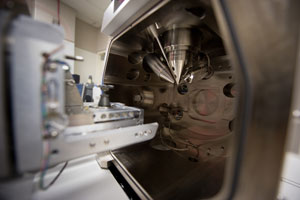 The inside of the specimen/vacuum chamber of NREL's FEI Nova 200 dual beam electron microscope used to analyze the topography of materials such as Innovalight's Silicon Ink. The instrument is used to produce site-specific sections for high spatial microstructural analysis.
Credit: Dennis Schroeder

The first NREL/Innovalight partnership was a 2008 cooperative research and development agreement, or CRADA, in which Innovalight paid for the expertise of the scientists at NREL, who in return agreed to keep the proprietary technology secret.

Later, Innovalight won a competitive bid to enroll in NREL's Photovoltaic Incubator program in which it had to meet stringent deadlines to deliver improvements in its technology in return for the help of NREL scientists in overcoming barriers.

Innovalight eventually worked out the kinks in its process for using Silicon Ink in an ink-jet application. It showed off the technique to potential customers at a demonstration assembly line at its Sunnyvale, Calif., headquarters.

Customers were unfamiliar with ink-jet printing as it applied to solar cells, so manufacturers balked at making the leap. "But they all had screen printing on their production lines already," Mitchell said. "Adding another screen printer was something their operators would understand."

So, the goals of the Innovalight/NREL partnerships shifted to proving the reliability of Silicon Ink with screen printing.

Chinese Have Signed on to the Technology, United States May Be Next

The manufacturers that have signed contracts for Silicon Ink — all in China, including JA Solar, Hanwha SolarOne, and Jinko Solar, — are trying the technology on selected assembly lines. If they get the results expected, they'll likely start using it on all their lines, Mitchell said. If that proves successful, then they might be ready to try Silicon Ink with the ink-jet method, which Innovalight says holds even greater promise to improve cell efficiency and save money.

The partnership with NREL "absolutely was a positive experience from the beginning," said Conrad Burke, who founded Innovalight and is now general manager of DuPont Innovalight, which now has 58 employees.

Speed and Precision Keys to Large-scale Manufacturing of Solar Cells

When you're making millions of solar cells a week, the process has to be a combination of precision and speed.

Innovalight's ability to make their Silicon Ink emulsion liquid, without having solids clump together or fall to the bottom made their product a potential game-changer.

The aim is to moderately dope the emitter between the front grid lines such that most of the sun's light is absorbed in the solar cell's lightly-doped base, while heavy doping in the emitter precisely under the grid lines reduces contact series resistance.

The result is a more efficient solar cell, which means smaller modules can generate the same amount of power. And that means lower costs for the consumer, who can get electricity with a smaller down payment, and lower costs for the manufacturer, who can save hundreds of millions of dollars a year and sharply increase profit.

How does it happen?

The goal is to make a junction where electrons and holes are in equilibrium but where there is a voltage difference that builds in an electric field. To do that requires two different types of silicon, p-type and n-type. Each of the types requires different loads of impurities, or dopants.

The dopants or impurities added to the silicon alter the electrical properties. Adding phosphorous produces n-type silicon, the "n" standing for free negative electrons. Adding boron produces p-type silicon, which produces positive charges or holes. The opposite charges — n-type electrons and p-type holes — carry the charge in a solar cell when they come into contact at a junction.

"They told us what they wanted to prove, so we thought about it and proposed some experiments," NREL Senior Scientist Kirstin Alberi said.

After Innovalight prepared the samples for the experiments, NREL's experts on measurements and characterizations got involved, as did specialists in scanning capacitance, contrast imaging, and microscopy.

Huge Electron Microscopes Up to the Task

Romero subjected the samples to contrast imaging and, with the aid of an electron microscope, determined both the depths of the dopants and how far they spread laterally.

Using a process called secondary ion mass spectrometry, NREL's scientists sputtered off the atoms and analyzed the mass of elements to determine their exact composition. Then, applying spatially resolved measurement techniques, they created a map to tell them where precisely the elements lie on the sample.

They proved that Silicon Ink can be used to lay down p and n type silicon on the back of a silicon wafer, eliminating the need to have contacts on the front of the wafer.

"They developed the ability to get silicon particles doped in the special way they wanted for p type and n type. They could adjust the size of the silicon particle," said Richard Mitchell, NREL's lead investigator on the project.

The contact and emitter design enhancements achieved with Silicon Ink are optimized such that each cell gains a percentage point in efficiency — bumping up from converting, say, 16 percent of the photons into electricity to 17 percent. That's actually a 6 to 7 percent increase in overall efficiency.

The proofs from the tests were enough to attract DuPont, one of the largest corporations in the world, which acquired Innovalight in August.

"It's always good when an industrial capability collects the interest of large corporate financing," Mitchell said. "They certainly did their due diligence, before they decided that this was a good technology to buy."