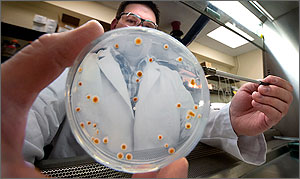 Data from the U.S. Department of Energy (DOE) show that the National Renewable Energy Laboratory (NREL) leads all DOE national labs when it comes to working with businesses on research and development efforts to commercialize cutting-edge technologies.

CRADAs (Cooperative Research and Development Agreements) are used by the labs and collaboration partners to promote technology transfer. Under CRADAs, outside groups can benefit from NREL's research capabilities, technologies or intellectual property to create or bolster an existing or start-up business.

"We do cutting-edge research here, companies know that and they call us to collaborate," NREL Vice President for Commercialization & Technology Transfer William Farris said. "Each year DOE collects data from the labs about their CRADA activities. When you look at those data, you see that NREL is actively engaged in collaborating on research and moving technologies into the market and we outdo all other DOE labs including labs that are many times our size."

Part of NREL's success is because of the lab's mission to grow and support new clean technology industries. NREL's work runs the gamut from basic science all the way through to applied research in renewable energy and energy efficiency technologies.

"NREL has the basic research capabilities but we are never going to be the ultimate producer of a commercial product. That is the role of the private sector," Farris said. "We may come up with a new and innovative technology, but for it to end up on a utility scale deployment or in the fuel tank of a vehicle; there is a commercialization partner who is going to invest in the business, facilities, sales, support — all of which is done outside of the lab. So, it is an ideal arrangement to couple government investment in new technologies with the commercial drive of the private sector."

According to Farris, most companies do not have the resources to fund research that is 10 years away from a commercial product. He sees a role for the federal government to take on some of the early stage risk, with the investment paying off with an industry that will lead to U.S. manufacturing, jobs and businesses.

A text version of the audio will be available soon. If you need immediate assistance, please contact Heather Lammers.

One example of a company leveraging NREL resources and DOE funds to advance fuels technologies is OPXBIO in Boulder, Colo. Using $6 million in Electrofuels grants from DOE's Advanced Research Projects Agency -Energy (ARPA-E) and adding $2 million of its money, OPXBIO is focused on taking energy from hydrogen and converting it into liquid transportation fuels.

Electrofuels are fuels derived from electricity or electrons. In this case, the CRADA partners are using a microbial approach.

"We are using our technology to optimize a microbe that will convert hydrogen and carbon dioxide gas directly into diesel," OPXBIO Chief Scientific Officer Michael Lynch said. "NREL has expertise in how you make hydrogen — we are leveraging that in reverse. How a microbes eat hydrogen more efficiently to produce the diesel."

The processing being studied by OPXBIO, NREL and Johnson Matthey, starts with simple hydrogen gas and carbon dioxide (CO2) gas. The CO2 supplies the carbon, which is the backbone of the fuel molecule; and the hydrogen supplies the energy. The gases are mixed in a big water tank with the microorganism, and the microorganism takes up the gases and converts those directly to a diesel molecule.

"If we use the fuel directly, the molecule we are making is equivalent to a biodiesel molecule," Lynch said. "We can either use it in biodiesel tanks or we can upgrade it with a … catalyst to produce traditional diesel or jet fuel."

For NREL scientists, the chance to work with OPXBIO's microbe is an opportunity to grow research in a new direction. "This project will enable NREL to gain expertise on this unique microbe that can use hydrogen, carbon dioxide to create a new direct drop-in fuel, meanwhile OPXBIO can take advantage of NREL's in-house expertise in microbial hydrogen and carbon dioxide metabolism." NREL Principal Scientist Pin-Ching Maness said.

At the end of the three-year ARPA-E program, OPXBIO plans to be at the stage to produce diesel at pilot scale. 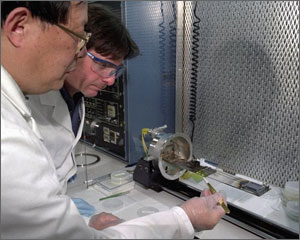 The world record efficient cadmium telluride photovoltaic cell developed by NREL's Dr. Xuanzhi Wu, left, and his colleagues, was developed into a commercial product by PrimeStar and will soon be manufactured by GE.
Credit: Warren Gretz

"From the day that PrimeStar Solar was founded, we have worked hand-in-hand with NREL," PrimeStar Vice President for Technology Fred Seymour said. "It took some months for us to work through the licensing, but it was very clear from the beginning that NREL wanted to help."

PrimeStar Solar formed around NREL's technology and the desire to make it commercial. "We were the information source for the people at PrimeStar who were going to go after the technology, but they could benefit from our knowledge of thin-film solar cells," NREL Senior Scientist David Albin said. "They used the CRADA to help jump start making a company work."

"Through our CRADA, we have had characterization help from NREL and early on we did interleaving with the laboratory to help us scale up our line and we continue with ongoing consulting work," Seymour said.

A key event leading up to the purchase of PrimeStar by GE was a technical services agreement involving Albin spending several weeks at the GE Global Research Center in Niskayuna, N.Y. to help set up a solar cell fabrication line there.

"Getting the CRADA going with PrimeStar and then having GE come in, suddenly brought in that big chunk of how you manufacture things cheaply," NREL Principal Scientist Tim Gessert. "It's likely that GE, with its engineering muscle will find innovative ways to do solar on a large scale."

NREL is collaborating with Verdant Power on a CRADA to design, and test a new composite rotor for marine- kinetic hydropower turbines.

There are different ways to extract energy from water including: waves, currents, and rivers. The Verdant Power technology is very similar in concept to a wind turbine but with applications for tidal changes and river and ocean currents. Experience with the design, modeling, and testing of similar wind energy systems is why the company turned to NREL for assistance. A critical component of the system is the rotor, which consists of a hub and blades which transfer the kinetic energy of the water to create power generating torque. Optimization of the rotor design can lead to more efficient rotors with increased energy capture and reduction in manufacturing costs.

* Top three in each category listed.

"NREL has been working with Verdant since 2008 to develop not only an improved hydrodynamic and structural design of the rotor, but also to characterize the fundamental properties of tidal flows and develop the computational tools needed to model and design advanced kinetic hydropower systems," Senior Engineer Scott Hughes said. "We've taken what we know about wind turbines and combined it with Verdant's expertise in marine engineering and marine hydrokinetic systems to help develop new tools for marine applications." The culmination of the CRADA will be a full-scale structural test of an advanced composite rotor blade at the NWTC.

"Marine hydrokinetic turbines are installed under water and rotate slowly but steadily thanks to the natural currents of tides and rivers," Director of Marine Current Technology Dean Corren said. "This motion drives a speed increaser, which in turn drives a grid-connected generator, both of which are encased in a streamlined waterproof nacelle mounted on a pylon."

To enable the development of the new rotor system, NREL developed design tools for optimizing rotor performance for marine applications. These tools were adapted from a suite of NREL codes which have been used extensively in wind energy applications. The new codes leveraged NREL's code development expertise with the in-water experience of Verdant, enabling a comparison and validation of the codes. Verdant can use this tool to access a variety of rotor tools and airfoil configurations in a very short period.

"This research is important to optimize the cost of marine renewable energy," Hughes said. "Robust design tools and validation testing are fundamental to develop reliable products. If we can demonstrate technology viability, there is a tremendous resource for marine hydrokinetic device deployment near many high density population centers."

In addition to NREL, Verdant Power has partnered with the Sandia National Laboratories (SNL) and the University of Minnesota's St. Anthony Falls Laboratory.

Learn more about Technology Transfer and Commercialization at NREL.