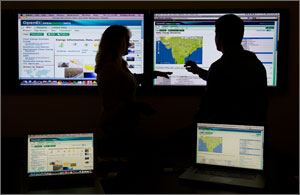 NREL researchers Debbie Brodt-Giles and Graham Hill examine some of the web pages available to the public through OpenEI.org, a new site where consumers, scientists, and utility representatives can get information on energy.
Credit: Dennis Schroeder

Utility rates from cities all across the United States are now available in one place — the U.S. Department of Energy's Open Energy Information platform, or OpenEI.org.

Am I paying too much for electricity? Does it make sense for me to put solar panels on my roof? Should I lease my land to wind-farm developers?

Consumers and businesses are asking, and OpenEI provides the answers. Developed by the DOE's National Renewable Energy Laboratory, OpenEI is where energy officials and consumers alike can go to boost their energy IQs and make better decisions.

The free site blends elements of social media and Wiki-based technology with robust and previously unavailable information on energy sources and prices. The result: a powerful, collaborative platform that is helping government and industry leaders around the world define policy options, make informed investment decisions, and create new businesses.

"Remember the end of Raiders of the Lost Ark, when the Ark was hidden away in a warehouse?" said Debbie Brodt-Giles, NREL's supervisor of the site. "Many web sites are like that — taking something with the power to transform the way we see the world and locking it away. OpenEI is about more than collecting data. We're about sharing data in ways that transform understanding."

Transforming the way we see the energy world is the point behind OpenEI, which NREL launched late in 2009 in response to the White House's effort to promote the openness, transparency, and accessibility of the federal government.

Crowd-sourcing uses the power of numbers to boost reliability 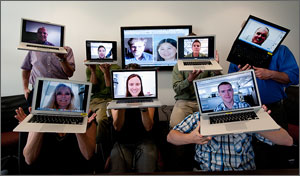 Members of NREL's OpenEI.org team make a statement about the crowd-sourced, friendly nature of the web site.
Credit: Dennis Schroeder

The site uses the power of crowd-sourcing to make energy information ever more robust and more accessible. In addition, maps and other visualization tools transform raw data into displays that are easily understood.

"The more people, the more experts, we have contributing data and using the site, the better the site is going to be, the richer the experience is going to be," Brodt-Giles said. "To have a platform to openly share information that is typically hard to access is a big plus."

"OpenEI's unique quality is that it is so open, collaborative, and transparent," NREL's Graham Hill said. "The new Utility Rate Database is a great example. We've taken information that is typically disparate and difficult to find and we've made it easy for anyone to access and understand."

The new information allows anyone with Internet access to compare kilowatt-hour rates in dozens of cities and zero in on such variables as time-of-use rates, demand charges, and tiered rate structures.

For household consumers, that could mean getting wiser about whether to install rooftop solar panels or finding other ways to lower their energy bills. A farmer in rural Iowa can assess potential profitability of leasing land for wind development.

Energy investors could use other tools to determine how many turbines could be installed on the same property. They can analyze information on rates, sunshine, wind speed, and incentives to inform their decisions. With OpenEI, decision makers can reduce missteps and save time and money.

The new utility-rate data show average consumption rates in the cities. The data illuminate, for example, that air-conditioner-revving warm-weather cities Tucson and Atlanta consume far more energy than cooler-weather cities such as Boston, Denver and Milwaukee.

Since the launch of OpenEI a year and a half ago, the site has had more than 450,000 visits from 190 countries. It now holds more than 600 data sets and has created more than 54,000 wiki-content pages. 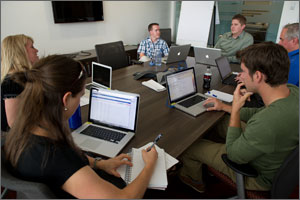 The team that developed OpenEI.org meets regularly to suggest new data sets and to work on ways to improve the product.
Credit: Dennis Schroeder

What are these visitors creating and finding? Among other things:

Utilities typically put their rates somewhere on the Internet, but OpenEI ensures that those rates are easily accessible by consumers and in data sets that compare costs across a range of cities.

Click on http://en.openei.org/wiki/India for example, and you'll find among many other nuggets that India is not only the world's most populous democracy, but ranks eighth in the world in solar potential, just 120th in wind potential and has more than 66 million short tons of coal reserves.

OpenEI.org has a collaboration with the Centro De Energias Renovables in Santiago, Chile. NREL and the Chilean renewable energy lab are hoping to extend a network across South America, using OpenEI as the platform to link national labs.

The ultimate benefit of OpenEI.org is the acceleration of energy technology research and the transformation to a clean, secure energy future.

When Energy Secretary Steven Chu announced OpenEI.org, he said: "The true potential of this tool will grow with the public's participation — as they add new data and share their expertise — to ensure that all communities have access to the information they need to broadly deploy the clean energy resources of the future."