Providing clean, renewable energy to the 1.4 billion people who are living without electricity is the No. 1 priority of the United Nations, the secretary general of the U.N. said during a visit Aug. 24 to the U.S. Department of Energy's National Renewable Energy Laboratory.

NREL, through its numerous partnerships with the U.N., is playing a crucial role in making that happen and building a sustainable world, Secretary General Ban Ki-moon told a crowd of researchers assembled at NREL's Research Support Facility "When we put a priority on renewable energy we address job creation, we address climate change, women's empowerment and food security," Ban said. "Sustainable energy cuts across nearly every major challenge we face today and will face in the future.

"We must work together to realize this initiative of sustainable energy," Ban added, saying the U.N.'s goal is that every village in the world have access to electricity by 2030, and that there is a doubling of renewable energy and energy efficiency by 2030.

"We can create jobs that will stimulate economies and provide universal access to all the people," he said. "That is why the General Assembly has declared next year as the International Year for Sustainable Energy for All." 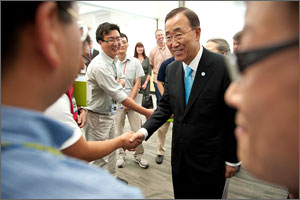 Ban said that in the past five years he has traveled to both poles, to the Aral Sea, to Mount Kilimanjaro and other spots around the world seeing evidence of the negative effects of climate change, caused in part by the burning of fossil fuels.

"I'm here at NREL to learn more about how we can work together on international issues, how research communities can help us realize sustainable energy," he told the gathering of NREL employees "I fully support your work."

Ron Benioff, manager of International Programs at NREL, told Ban that NREL is working with 50 countries, ranging from biofuels partnerships with Brazil, to solar work in China and Europe, to helping island nations integrate solar and wind power into their electric grids. Senior project leader Phil Voss noted that NREL is working with the Energy Department and the Department of State to help Haiti emerge from the devastating earthquake with a renewable energy package that will bring electricity to more Haitians than before the disaster. The project has mapped Haiti's solar and wind resources and is working on a plan to turn waste into energy. 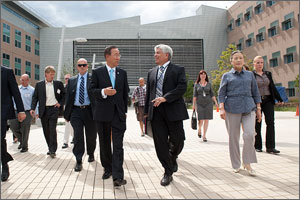 Arent also told Ban that in Nepal an NREL tool generated a quick assessment of the square kilometers available for solar energy in the savannahs and shrub lands, demonstrating that it is an attractive alternative, particularly in rural areas.

NREL Director Dan Arvizu told Ban that the lab's mission is "to be the steward of our national investment in renewable energy and energy efficiency. We have experts from various disciplines, and that allows us to integrate deployment and come up with market solutions for creative ways to speed the deployment of renewable energy," Arvizu said. "And, that drives other agencies to come here for consultation and help with making decisions on visionary policies."

Ban noted that Colorado has the ambitious goal of 30 percent renewable energy by 2020, and asked what the United Nations could learn from the strategies employed to get there.

Arvizu answered that in the United States a big driver of innovation is economic development. "In a state blessed with many resources, such as Colorado, there is an interest in using the resources in a very sustainable way and in a way that produces new jobs," he said.

"We hope we can demonstrate things locally that can coalesce into national targets," Arvizu said. "Our role here is to be forward thinking on increased use of alternative energy."

Arent emphasized the importance of relying on quality information to make decisions. And he suggested that Ban "embrace the diversity" of resources available in each country, and to realize that each country will have a unique portfolio of challenges and resources Ban visited NREL's Outdoor Test Facility, where solar cells and panels from many private companies are analyzed for durability, reliability and efficiency. 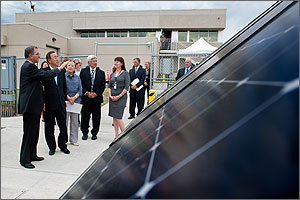 He was shown flexible solar panels, each of which can provide the electrical needs for a very small house, of which there are hundreds of millions around the world. Executives from Global Solar and Ascent Solar showed Ban low-cost solar panels that are ideally suited for developing countries.

"We put them through a battery of tests and if they perform the way they should, we give them the stamp of approval," NREL Deputy Laboratory Director for Science and Technology Dana Christensen told Ban. "It's that stamp of approval they need so they can go to the banking community and borrow money. The banks know if NREL says it is going to perform, it's going to perform."

NREL computational scientist Jinsuk Lee posed for a photo with Ban and later said it was a thrill. "I very much appreciated that the Secretary General puts so much importance on renewable energy."