NREL Intern Wants to Make a Difference through Chemistry

Annie Greenaway is applying her chemistry skills to a thorny problem associated with hydrogen fuels this summer — and the NREL intern thanks her parents for nudging her toward the right career path. Full story.

This summer, workers at the U.S. Department of Energy's (DOE) National Renewable Energy Laboratory (NREL) are advancing our understanding of hydrogen fuels, carbon nano catalyst technology, the use of indium zinc oxide in thin film solar cells and many other research areas. The results soon will be published in journals and presented at industry conferences. The teams doing this groundbreaking work aren't NREL senior scientists or engineers, but the lab's undergraduate interns.

For 10 weeks every summer, college students from across the county migrate to Golden, Colo., to work side-by-side with top researchers at the only national laboratory solely focused on renewable energy and energy efficiency research and development.

"This is not simulated research," said NREL Education Program Coordinator Linda Lung. "They are part of a research team."

Being part of a research team is an opportunity Natalie Bodington-Rosen is fully aware of as she works on depositing indium zinc oxide onto thin film solar cells. The goal is to make the cells with less indium to reduce costs. "Having all of these resources at your fingertips and not thinking 'can we do this' but, 'let's find a way to do it' is a wonderful experience," Bodington-Rosen said. 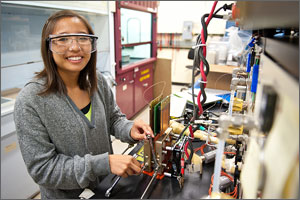 Nurturing science interests in students from middle school all the way to graduate school is a priority for DOE.

"The summer internship program is our greatest program for workforce development," Lung said. "We are trying to figure out the workforce needs are for DOE and, what NREL can to meet that need."

DOE-sponsored education programs begin with middle school students via the hydrogen fuel cell and solar car races. High school students are engaged through the National Science Bowl. "Then we say, 'hey, wouldn't you like to do an internship?" Lung added. "It's a good fit because we already know they are interested in science and we have seen this education pipeline work with interns later becoming NREL employees."

The other priority DOE has is energy literacy and getting young people to understand the source of the energy that powers their homes so they can make informed decisions when it comes to using it. That is a message that resonates with summer intern Amy Tsang who is researching the manufacturing process for hydrogen fuel cell membranes. "I think it is very important to continue our research and further our technology," she said. "We are going to have to reduce our dependency on fossil fuels because of high prices and climate change. Our world has to change to a different energy strategy and renewables is it." 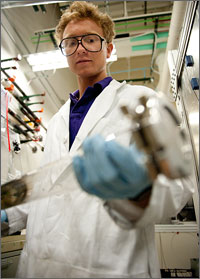 NREL intern Patrick Smith cleans nano particles out of a reactor tube. At NREL, summer interns do hands on research, which helps them with future education and career goals.
Credit: Dennis Schroeder

For many of the NREL interns, this is the first time working in their field, or even in a professional work environment. Intern training covers basics from research roles and responsibilities — with a high priority on safety — to dress codes. But, it's also important to show results at the end of the 10 weeks.

"They have specific deliverables," Lung said. "Our interns have to produce a research paper and a poster session." The students have the opportunity to see their research published in the Journal of Undergraduate Research. They also can be selected to present at the annual American Association for the Advancement of Science (AAAS) annual conference.

Months before the summer starts, NREL mentors are given the opportunity to view the database of hundreds of applicants and select the intern who best matches their project.

This is NREL Scientist Matthew Lloyd's second year working with a summer intern. "It's beneficial for both the mentor and the student," Lloyd said "I've found that it's worth the time that you have to invest in the student and it pays back in spades to be involved in the program."

The student working with Lloyd, Skyler Jackson, is optimizing layers in organic photovoltaic devices, which means making the same devices repeatedly but with slight variations. The team is varying the processing conditions for a zinc oxide electron transport layer and looking at how it impacts overall performance of a PV cell.

"In optimizing the device layers, I'm having them do work that is particularly time consuming, and it is work that I would normally do, and it would take a large chunk out of my day," Lloyd said. "It really boosts our productivity to have an intern devote time to this project."

First-time NREL mentor and postdoctoral researcher Andriy Zakutayev got excited about the idea of mentoring a college intern after attending a conference session on mentoring and building relationships between students and the advisers.

"I envision, at some point, doing work in academia and I also had a lot of work and figured it would be great to have a student working with me over the summer who could benefit from the work we do at NREL," Zakutayev said.

Zakutayev's intern, Frank Luciano, is helping bring to life a thermoelectric power measurement tool that Zakutayev built. "I was really impressed with the number and the quality of the students who applied," Zakutayev said. "My intern just finished his freshman year. When I think about myself and my friends at that age, we didn't have half of what they already know. I just wish the program was larger and more students could participate."

This year, 35 students took advantage of NREL's summer program. While the summer season marks a peak in internship program participation, a variety of programs run year-round:

"Although we benefit from the students' work, it's also incredibly beneficial for them," Lloyd said. "It puts them at the top of the list for other research positions. Or, if they are going on to grad school, the summer programs through DOE really make the students stand out from their peers."

While the opportunities for interns to learn while working at NREL are immense, the opportunities for discoveries are even greater. "It's great to understand what research really is and when you get here it is mind-blowing," Tsang said. "You realize how much there is to discover and how little we do know about our world."

NREL Intern Wants to Make a Difference through Chemistry 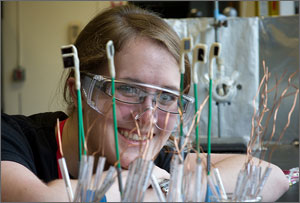 NREL intern Anne Greenaway is working with electrodes and electro chemistry cells in the hydrogen lab. This is her second year as an intern at NREL.
Credit: Dennis Schroeder

Annie Greenaway is applying her chemistry skills to a thorny problem associated with hydrogen fuels this summer — and the NREL intern thanks her parents for nudging her toward the right career path.

The Truman Scholar and Goldwater Scholarship winner recalls the day when she succumbed to the inevitable.

"I was a junior in high school, and I had to take either biology or chemistry, so I chose chemistry, but that's not what I really thought I wanted to do," said Greenaway, who fancied herself more of a literary or political type.

"But my parents said, 'You come home, and that's all you talk about, what happened in chemistry class today,'" Greenaway added. "So I thought, maybe that's what I should be doing."

How to reconcile her ambitions for politics with her unexpected love for chemistry?

"I realized that a lot of politicians don't have any scientific background, and of course they are the people deciding on funding," she said. How about chemical research in renewable energy, so if she gets into the policy side, she can do so with the expertise of a scientist?

Greenaway, who attended Thornton High School in the Denver suburbs, shopped around for a small college that might have what she was seeking.

She found Hendrix College in Conway, Ark., which offered a chemistry major that emphasized green chemistry. At Hendrix, she thrived, heading up the Culinary Club, but also heading up a project to eliminate heavy metal use in the General Chemistry curriculum. Greenaway won a Goldwater Scholarship this spring to help her with her undergraduate expenses. During her junior year, she studied a semester in Brussels, Belgium, where she investigated how European Union countries were meeting their requirements for using renewable energy, and promoting the use of solar, wind and other alternatives to fossil fuel.

She liked the feed-in tariffs that many of the European nations adopted, and especially liked the 20-year guarantees that renewable energy would fetch a stable price.

She'd love to play a part in bringing those kinds of long-term price guarantees to the United States, but realizes that Americans and Europeans often have different values and priorities. "You can't just make these wild claims and decide to do things without the political will to back you up."

The European goals are ambitious: a 20 percent improvement in efficiency by 2020, at which time 20 percent of energy will be provided by renewables and 20 percent of the transportation fuels will be biofuels.

At NREL, Greenaway is working on hydrogen production with senior scientist Todd Deutsch, himself a graduate of NREL's internship program a decade ago.

"The goal is to combine them to get something that splits water pretty efficiently," Greenaway said. As soon as her samples are made and tested, she'll start working at NREL's mesa-top labs.

"We were working on something that had potential to be a huge breakthrough," Greenaway recalled. "None of it worked out … but it had to be done, someone had to do it." That work, done by interns, answered important questions and cleared the way for a new approach this summer to the hydrogen electrolysis question.

She thinks hydrogen "is going to be huge," an important part of the transportation fuel mix in the future, and hopes support for research will continue.

"Car companies think hydrogen is coming," Greenaway said. "Almost all of them have one fuel-cell vehicle in the pipeline for 2015. It all is going to depend on the wide-scale deployment of hydrogen-fuel centers. You don't want to drive 400 miles and then be stuck without a place to fill up."

Greenaway will graduate from college next year. Her Truman Scholarship will pay for much of her graduate education, and she intends to get a doctorate in chemistry.

Next summer she'll spend 10 weeks in Washington, D.C., working with a congressman or a think tank on science and policy – two things in her wheelhouse.

The Truman Scholarship Foundation searches for people who can be change agents, students who are looking to go into public service.

"I have strong political leanings and I wanted to do something socially relevant," Greenaway said. "I don't think I'd make a good politician because I'm too opinionated and not willing to make political compromises.

"I came to the conclusion that the best way for me to be involved and to affect policy is through renewable energy. That's why I wanted to work at NREL."

As a Truman Scholar she has pledged to work three years in a public service field – education, government, military or a non-profit. That's right up her alley. "I'd love to be in the national laboratory system and to be at NREL if I can be.

"NREL is a great place to work, and I love Colorado," Greenaway said. "The focus here is really great."