A Better Way to Connect Solar, Wind to the Grid 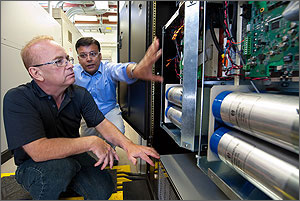 NREL engineers Sudipta Chakraborty and Bill Kramer examine the design of the power block at a laboratory at NREL. The large cylinders are the DC bus capacitors. The digital controller is on the green board.
Credit: Dennis Schroeder

The sun makes sidewalks hot enough to fry eggs, the wind blows hard enough to tear fences, but if solar and wind energy can't be converted to the 60-hertz alternating current (AC) standard in the United States, it can't be connected to the grid for use in homes or offices.

That's where the inverter fits in, a device that takes that distributed energy and turns it into grid compatible AC power.

If the United States is to generate a significant amount of the nation's electricity from clean energy, the inverter must be smarter, more flexible and a whole lot cheaper.

The U.S. Department of Energy's National Renewable Energy Laboratory, with industrial partner Semikron, and with funding from the California Energy Commission, has developed a prototype of a 50-kilowatt inverter. Inside is a 50-kW modular power block the size of a microwave oven that can be included with a photovoltaic array, small wind turbine, battery charger, fuel cell or flywheel and control the flow of energy onto the electric grid.

Besides being the most versatile, the integrated 50-kW modular power block is more reliable, more durable, lighter, and should cost significantly less than other power blocks of its wattage. A reliable power block suitable for multiple applications such as photovoltaics (PV), wind turbines and batteries should sell in high volumes, and that's when the big savings should kick in. When the power block is produced in volume, the price is expected to be just one-third of the cost of other integrated power electronics of the same rating.

At 16 inches wide, 8 inches tall and 12 inches deep, the flexible power block should be a workhorse in the electricity industry as it adapts to integrating more PV, wind and battery power. The power block includes electronic switches, sensors, direct-current bus filtering, a heat sink, a driver and a controller board.

It will be packaged inside a 6-foot by 2½-foot inverter, which also will contain inductors, capacitors, sensors, contactors, pilot relays and a DC power supply, along with protective devices to suppress surges, protect against ground faults and ensure emergency shut off. 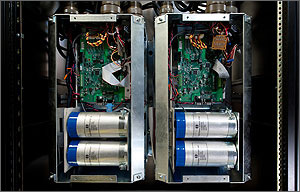 A digital controller in the brains of the power block allows the user to modify control algorithms to allow it to work with different technologies, Ben Kroposki, leader of the Distributed Energy Systems Integration group at NREL, said. Used in an inverter, "the power block will allow utilities to let more renewable energy come online."

By combining off-the-shelf high-volume, high-quality components from Semikron, with a flexible controller and software module from NREL, the power block combines reliability, flexibility and cost savings.

"It's in its final prototype stage," NREL's Bill Kramer, the principal investigator, said. "After one more redesign, we'll get a dozen or so of these into the hands of industry across different disciplines to get their feedback. We hope they start using these components in their designs to lower their costs."

"This is a building block for multiple applications," said NREL electrical research engineer Sudipta Chakraborty, the lead researcher on the project. "It doesn't matter what renewable energy application you're using, this will be the heart of the power conversion. 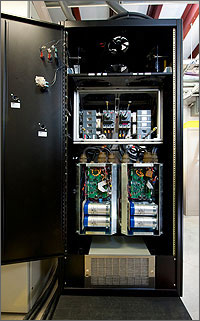 NREL's 50 kW Power Blocks will be housed in inverter cabinets as shown in this photo. The power block rests above the air-intake blower and below the AC and DC protection devices, an accessory rack and air-out fans. The entire package is about 6 feet high, 2 ½ feet wide and 2 ½ feet deep.
Credit: Dennis Schroeder

The 50-kW power block is modular, so the same power block can be used for multiple technologies. It's also scalable, so two or more can be connected to create a larger power converter without having to redesign a system. It also doesn't need any external DC filtering capacitors, further lowering the cost. "It makes the inverter a lot cheaper for many technologies, because you don't have to custom-design the DC filtering," Kroposki said.

"The manufacturer can easily build an inverter based on our power block," Kramer said. "They just have to integrate the power block into their product. Until now, the inverter manufacturers have to build every inverter from scratch. They still have to add filters and protections and so forth, but we give them a large part of the inverter that is already integrated and tested."

NREL has a Cooperative Research and Development Agreement with the California Energy Commission. CEC is using NREL's algorithms developed on the 50-kW power block as a way to help lower electric bills for California customers.

The power block is designed to use in various power converters such as DC to AC (alternating current), AC to DC, or DC to DC converters.

In the case of photovoltaic systems — those that convert the sun's photons into electrons for electricity — the power block acts as a DC to AC converter. A large photovoltaic system must convert the variable DC output — it varies because the sun's intensity varies — into reliable 60-hertz AC power that can be accepted by the grid. Once it's on the grid, any consumer or business can use it.

If the task is battery charging, the power block converts AC power from the electric grid to DC to charge the battery.

Conversely, if the task is battery discharging, the power block acts as a DC to AC converter so the battery can provide AC power back to the grid.

For a small wind turbine, two power blocks can be used back-to-back so that the first one converts the variable AC power from a wind turbine generator to DC. The second block then converts that DC to 60-hertz AC power acceptable to the grid.

For systems that aren't intended to go on the grid, the power block can be used as an islanded inverter to supply off-grid loads.

With NREL's guidance, Semikron pulled together off-the-shelf components to build a low-price package. NREL developed the software to control the power block. "We developed the control algorithms so that the same piece of hardware can be used for multiple applications, just by changing the software," Kroposki said.

To verify the operations of the new power block, NREL also designed an inverter platform that consists of a cabinet housing the power block, filters, air cooling, and protection. In addition to the basic inverter operations, new control algorithms are being developed and tested using this platform.

For example, NREL has demonstrated that control algorithms can be easily modified so inverters can supply both active and reactive power or can even be used to regulate voltage. It has been known that inverters could supply such advanced capabilities, but "we're showing that in the future, when regulations allow it, there is an easy way to implement them," Chakraborty said.

The power block is the right size to be used in a power system that could bring electricity to, say, an apartment complex or a group of about 10 houses. The scalability to use multiple power blocks in parallel will be useful for larger installations.

Most power converters fail faster than the renewable energy systems themselves. They have to be replaced more often than the wind turbines or photovoltaic arrays designed to last 20 or 30 years. With the power block, because all the small components are integrated and tested as a single system, reliability grows.

The power block was designed to be highly reliable and to use high-volume parts, Kramer said. "The goal from the beginning was to develop a modular inverter that could be used in many applications so it can be produced in high volume, thus reducing the cost for renewable applications."

As the country focuses on developing more clean energy, this new power block and its advanced functionality will allow for higher penetrations of renewable energy to be interconnected to the electric grid, Kroposki said.