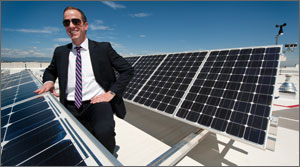 When the U.S. Department of Energy's (DOE) National Renewable Energy Laboratory (NREL) launched the Executive Energy Leadership Program (Energy Execs) in 2007, the goal was to inform private and public decision-makers about renewable energy and energy efficiency as well as inspire them to adopt clean energy technologies.

Recently, DOE announced a $1.4 billion partial loan guarantee to support the launch of Project Amp. Dubbed by DOE as the largest rooftop solar program in U.S. history, the loan guarantee submitted by Prologis' partner Bank of America Merrill Lynch, will enable Prologis to install photovoltaic (PV) panels on warehouse and distribution centers across the U.S. 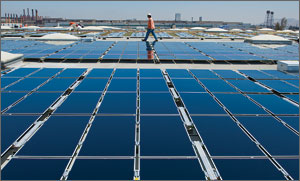 Workers install panels atop a Prologis facility in Fontana, Calif. At the time, it was the largest single rooftop installation in the U.S. At 2.4 megawatts on 607,000 square feet. The solar facility is owned by Southern California Edison.
Image courtesy of Prologis

The offer of conditional commitment from DOE will be the cornerstone of a financing vehicle that can fund up to $2.6 billion in solar projects on Prologis roofs. The projected energy generated from Project Amp after four years is approximately 733 megawatts (MW) of solar power, which is similar to the total amount of PV power installed in the entire U.S. in 2010.

"This unprecedented solar project will not only produce clean, renewable energy to power the grid in states across the country, but it will help us meet the SunShot goal of achieving cost competitive solar power with other forms of energy by the end of the decade," U.S. Energy Secretary Steven Chu said in the announcement. "In addition, Project Amp will create at least a thousand jobs across the U.S. and increase our global competitiveness in the clean energy race."

Even though the buildings in the Prologis portfolio are quite large, the energy demand within them is not equally as large. The buildings are warehouse or distribution space and the largest energy load is from lighting, which is why Prologis chose to send the buildings' power directly to the grid potentially offsetting energy for more than 88,000 homes.

"At the end of the day, we are buying land, we are putting a distribution center on it – using it to create value for that piece of property," Torbin said. "Project Amp is a great way for us to create additional value for those existing assets. We are leasing roof space, we are building out solar facilities and we are creating value. The biggest piece missing to do this at scale was an efficient form of financing."

Although Prologis was just starting to embrace solar on roofs of its U.S. properties when Torbin completed Energy Execs, he credits the program with giving him the knowledge to take it to the next level. "Energy Execs is a phenomenal program. I can truly say that there is no other offering anywhere in the world like it. It provides a strong foundation for anyone who wants to get involved in renewable energy."

According to Torbin, the solar efforts at Prologis have grown exponentially since his being a part of NREL's Energy Execs. When Torbin graduated, the company had approximately 6 MW of solar installed. Currently, with projects under construction, Prologis has more than 60 MW on rooftops.

"Now with Project Amp, we are going to grow exponentially. We are only limited by the dollars available and that's $2.6 billion," Torbin said. "At today's pricing, that's about 733 MW of PV." 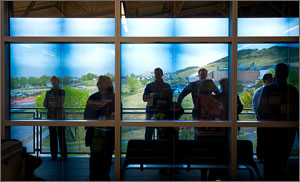 2011 Energy Executives participants watch the electrochromic glass darken on the west side of the Research Support Facility during a tour at NREL.
Credit: Dennis Schroeder

The 2011 Energy Execs class recently started its five-session course, held May through September.. NREL staff believes this year's execs already are forming important bonds thanks to a surprise visitor.

"Our classmates are from all over the country and that is a leveling influence, it forces them to reach out to each other from day one," program instructor and NREL's Manager of Stakeholder Initiatives Carol Tombari said.

This year's class attended a recent announcement made by Vice President Joe Biden at NREL. And, while the class waited for the vice president to speak, participants had a chance to mingle and bond. While a visit by the vice president is rare, it's an experience NREL is uniquely positioned to offer executives hoping to delve into clean energy. The lab can capitalize on its many scientists and technology experts to help participants learn more about renewable energy and energy efficiency applications, analysis and related and regulatory issues.

"Energy Execs is our chance to touch the influencers and decision makers throughout our country," Tombari said. "We can't tell them everything about renewable energy in the limited classes we have, but we can arm them with information so they know what questions to ask. Our goal is to make them dangerous."

Arming the Energy Execs means they leave the program with a support system. "We give them contacts at NREL so when they've left, they know who to call to get the information they need," Tombari said. "Along with that expert network, they also form a peer group of current students and alumni that they can relate to and share questions with."

Torbin leaned on that network for Project Amp, "NREL staff were a huge help, and really gave me some good insights into how to navigate the process," Torbin said. 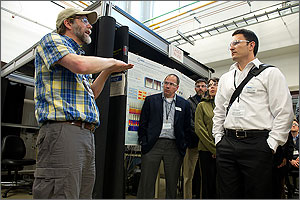 This year marks 100 participants completing the NREL Executive Energy Leadership program. NREL has so much interest in the leadership program it is implementing a new condensed course called the Energy Execs Institute. The inaugural three-day institute will be held in July. It will be a regular program in addition to the annual leadership program. Tombari noted that working with the execs is a highlight for her professionally, and she mentioned the students, staff and NREL all benefit from the program. "On one hand, the Energy Execs brand has helped enhance NREL's reputation in communities and companies we may have not touched," Tombari said. "But the graduates also proudly refer to themselves as Energy Execs and capitalize on this credential as they undertake clean energy projects."

Learn more about the NREL Executive Energy Program on the website, where updates will be posted later in the year about the application process for 2012. For more information, contact Energy Execs Program Manager Janice Rooney at janice.rooney@nrel.gov.