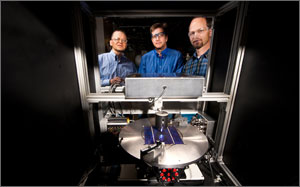 To come up with a way to do something 1,000 times faster than it had been done in the past, you have to count on some serendipity — not to mention hard work, collaboration and good timing.

Such was the case with three scientists from the U.S. Department of Energy's National Renewable Energy Laboratory, who somewhat accidentally developed a way to assess the quality of solar cells at a speed that is orders of magnitude faster than had been done before.

The instrument, Real-time QE, licensed and embellished by Tau Science Corp. as FlashQE™, uses light-emitting diodes, high-speed electronics and mathematical algorithms to measure the quantum efficiency of solar cells up to 1,000 times faster than had been done before.  The technology won a 2011 R&D 100 Award, as one of the year's most significant innovations.

What used to take 20 minutes — and therefore could be done only with random samples of cells — now can be done in a second. That means every single cell on a manufacturing line can be assessed and then sorted into bins so the cells that respond best to, say, red or blue are kept together on the same solar module. That way, a mismatched blue-response cell on a module won't put the brakes on all the work the red-response cells are doing. And that means more efficient conversion of photons into electricity at sunrise and sunset when the red wavelengths predominate.

Speed Means Putting Every Cell to the Test

Quantum-efficiency measurements indicate how well a solar cell converts the various wavelengths of sunlight into electricity. More precisely, QE is the ratio of the number of light-generated charge carriers collected by a solar cell to the number of photons of a given energy that are shining on the solar cell.

Today's solar cell manufacturing lines test each cell to determine useful cell parameters such as how much current and voltage is generated. But those tests give no information about how the cell responds to each color of light in the solar spectrum.

Flash QE's ability to also test for each cell's response to color allows crucial extra information to be fed back into the production line. It does it so fast, that cells of the same current and the same response to particular colors can be sorted into particular bins.  From these sorted bins, spectrally matched modules can be made to optimize the energy produced throughout a day.

Traditionally, determining how a single cell responds to different wavelengths of light has taken 20 minutes so only about one in 1,000 cells are plucked from the manufacturing process for that extra test.

Flash QE, though, has the speed to supply that extra rich information for every cell.

It likely will mean significant jumps in the efficiency values of future solar modules and arrays that power the fast-growing solar industry as well as much better manufacturing line diagnostics.

FlashQE comes on the market at a time when solar manufacturers are working to weed out any profit-robbing costs from their production lines, boost the conversion efficiencies of solar cells, and move toward the U.S. Department of Energy cost goals established within the "SunShot" initiative. 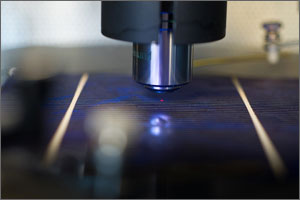 Inside the FlashQE, developed at NREL, light from light-emitting diodes is focused onto a solar cell.
Credit: Dennis Schroeder

It started in some small labs in NREL's Science and Technology Facility.

"I almost forget what we were originally looking for," principal investigator David Young said, recalling the time seven years ago when he was examining how different wavelengths of light penetrated to different depths in a solar cell. "We just wanted to come up with a real simple way of shining light of different colors."

Enter Brian Egaas, who worked close by and was doing work on quantum efficiency.

"We started looking at LEDs as the source of light, and I remember coming into the lab one day and saying, 'There are enough LEDs now that we can probably get every color of the rainbow,'" Egaas said.

But this work wasn't an official project. So, they went to their group leader, Rommel Noufi, who saw enough promise that he agreed to let them have $1,000 to buy some LEDs.

Egaas found a mom-and-pop shop in Vienna, Austria, that would supply them with LEDs that spanned the solar spectrum — and let them buy just a couple of each color, rather than the hundreds that are bundled together from larger suppliers.

"This invention came about at the time when it first could come about," Young said. "When enough LEDs were just coming onto the market, and when we had enough high-speed computer capability to get all that data coming out of the cells."

"We mocked it up, and turned on one LED at a time, to make the measurements," Egaas said.

"But there was just too much noise in the quantum efficiency measurement," Young said. "Brian had the whole thing rigged up, and we tried to pick up the speed of each individual measurement, but it was still taking 20 minutes or so to characterize each cell."

Enter Pauls Stradins, who had a lab in the same corridor, and was keeping a casual eye on progress by Young and Egaas.

"Pauls walks through our lab one day and says, 'Do you realize you can run all those lights at the same time at different frequencies?'" Young recalled.

"I'd been reading a book on how the brain works," Stradins recalled.

"The brain has many similarities with a computer, but whereas a computer does most things sequentially, the brain has a huge number of parallel channels," Stradins said. "When an image comes in, it doesn't process it 'one pixel, two pixels, three pixels,' it processes it instantly — in parallel."

Applying the brain's parallel approach to the challenge ahead of them — gathering quantum efficiency data from solar cells with a spectrum of encoded LED light colors — proved to be the key.

"We knew there were these mathematical things you can do to filter the processes in real time," Stradins said. "Because computers have so much memory now, we could probably just download a whole chunk for one second and get about a million points."

By arranging for each LED to blink at a different frequency, they could determine how each solar cell generated current in response to certain colors.

"We arranged it so we could take our test cell and run it against a pre-calibrated cell and learn the quantum efficiency of it," Stradins said.

"It was a true collaboration," Egaas said. "There were pieces that everybody had that needed to come together."

Over the next few years, they brought in summer interns to work on a prototype 10-LED device "held together by tape," Young said.

Transferring the Technology to Private Industry 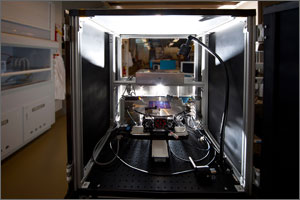 An interior view of the FlashQE instrument, with its array of LED lights aimed at a rectangular wafer.
Credit: Dennis Schroeder

Just in time for a scientific conference, they got the first data that proved that rich quantum efficiency information could be gathered almost instantaneously from a solar cell. Young gave a talk on the instrument at an IEEE Photovoltaic Specialists Conference in San Diego. He realized many in the solar industry were intrigued by the promise of a fast quantum-efficiency tool for analyzing solar cells in the lab and on the manufacturing floor.

The first commercial interest in the product came serendipitously.   After being alerted by a colleague that a start-up company was touring NREL trolling for new ideas to market, Young had 10 minutes to write up some notes, then "I gave four guys from Tau Science my off-the-cuff elevator speech."

"They just got it right like that," Young said. "They knew the solar market would eat up a fast QE system.

"They licensed the product and now are selling it."

Tau Science made significant improvements to the instrument, patenting their own ideas for LED optics and handling the vast amount of parallel processed data needed for the technique.

"It's been a great collaboration," Tau Science president Jamie Hudson, said, adding that co-founder Greg Horner got to know NREL while he did some post-doc work here.

"Quantum efficiency is an extremely fundamental technique in solar cells, and this is the first time it's been able to be done at speeds to keep up with the line," Hudson said. "It tells you the spectral response of the solar cell and also a lot of information about the front and back surfaces. You're able to look at every sample rather than just one out of 1,000."

Tau Science'sfirst shipment of Flash QE was in early 2011 to Oregon State University, which will use it in its pilot solar-cell production facility. 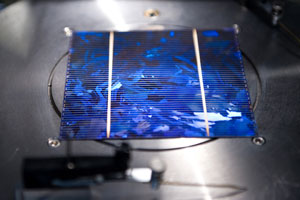 The FlashQE system uses an electronically controlled full-spectrum light source composed of an array of LEDs. Each LED emits a different wavelength of light. The LEDs illuminate the cell simultaneously, rather than the serial approach of a conventional system.  The key to the technology is that all the LEDs are flashed on and off at different frequencies thereby encoding their particular response in the solar cell.  High-speed electronics and mathematics cleverly extract the encoded information to reveal a full-spectrum quantum efficiency graph of the cell.  A wide variety of information is gathered in less than a second — information about the ability of the front surface of the cell to absorb high-frequency light, the quality of thin-film surface coatings, the ability of the middle region of a cell to absorb a wide range of wavelengths, how well the back surface absorbs lower-energy light, the ability of the back surface to collect electrons.

For multi-junction cells, Flash QE can detect how each of the layers performs by using the light source itself to "electronically filter" the light to only measure the response of the cell of interest.

Instant Feedback is a Competitive Edge

Flash QE is the quickest diagnostic tool for the quantum efficiency of solar cells, yielding both a voltage current curve showing the amount of power, and a spectral response gauge, diagnosing how the cells respond to different wavelengths of light.

Manufacturers can get a whole new insight into each of their cells, determining, for example, why they're not getting good responses from their reds.

Or Flash QE can detect that the blue response is slowly getting worse and worse — in real time, soon enough to alert workers that an adjustment must be made to the line.

Flash QE works for silicon cells, and also for multijunction cells that use stacks of materials such as gallium and indium. "With Flash QE, you can look at the individual responses of each of the layers," Young said.

"It's fast enough to do spatial measurement mapping across the cell," Egaas said. "Is the response the same on the edges as it is in the middle? Is there a cooling problem that makes the edge different? They can learn that they have to cool it more slowly, change the process based on the results."

It's like baking bread, Stradins said. Automated bakeries can produce good bread if the parameters are extremely tight, but if anything goes wrong, a huge batch gets wasted.

The family baker, able to take frequent peaks inside the oven, has better quality control. That feedback, with bread or with solar cells, is a powerful tool.

NREL's LED light source also is a stand-alone invention that could be licensed by another company for probing things other than solar cells, ranging from counterfeit bills to skin cancer.