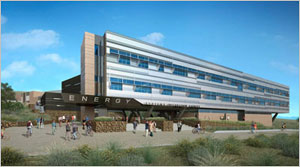 The Energy Systems Integration Facility will simulate, in real-time, the ebb and flow of various electricity generating systems and the fluctuating demands of electricity customers.
Illustration courtesy of SmithGroup.

The first edition of the quarterly webzine features NREL's new one-of-a-kind research facility, the Energy Systems Integration Facility (ESIF), where utilities and vendors will turn to learn how to build a smarter, more efficient utility grid that can handle increasing amounts of solar, wind and bioenergy.

NREL is the nation's primary federal laboratory for renewable energy and energy efficiency research and development. Its mission is to develop renewable energy and energy efficiency technologies and practices, advance related science and engineering, and transfer knowledge and innovations to address the nation's energy and environmental goals. Toward that end, the laboratory has earned 47 R&D 100 awards, the annual awards by R&D 100 Magazine, which identify the top 100 technological innovations each year.

More Than an R&D Laboratory 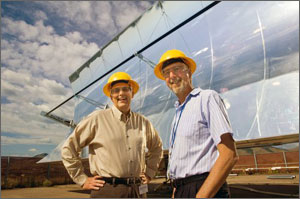 But NREL is more than an R&D lab. Its world-class testing facilities help wind, solar, biofuel, battery, and smart-window manufacturers determine the reliability and durability of their products before reaching the market. More than any other national lab, NREL pushes research out the front door and into the bays of industry.

Its more than 100 Cooperative Research and Development Agreements with private industry help companies license technology, overcome scientific hurdles and ramp up to manufacturing scale. NREL offers a continuum of services from fundamental science to deployment and commercialization.

"We chose the name Continuum because it represents the iterative nature of the research our scientists perform, as well as the way in which NREL bridges science and market need," NREL Communications Director Tom Stites said. 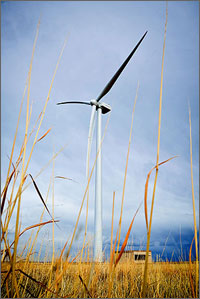 The feature article on the ESIF in the inaugural edition shows how utilities can simulate the real-time ebb and flow of various electricity generating systems and the fluctuating demands of electricity customers. It's a capability that has never been available before.

Another article in the first edition examines the Department of Energy's SunShot Initiative, and NREL's role in incubating the kind of disruptive technology that will lead to solar energy becoming cost-competitive with other ways of generating electricity.

Dana Christensen, NREL's deputy director for science and technology, calls it a "Herculean challenge" to bring solar energy to the marketplace at cost parity with other sources of energy. But it is a challenge that would pay enormous dividends. "The organization, the country that makes it happen first is going to control the market," Christensen said. "This is a big jobs opportunity. It's a technology opportunity that is truly leveraging what is really good about our country—and that's innovating things into the marketplace quickly."

Also featured in the inaugural edition are articles on wind energy, and on how the military is using clean energy to power vehicles and military bases.

NREL Director Dan Arvizu said Continuum Magazine is "dedicated to stepping beyond the technical journals to reveal the laboratory's vital work in a real-world context for important stakeholders near and far."

Each quarterly issue will provide "insights into the latest and most impactful clean energy innovations," while spotlighting the researchers and unique facilities that make it happen, Arvizu said.

For the past 33 years, NREL has been on the ground floor of most of the technologies used by the leading names in renewable energy today, Arvizu said. Continuum spotlights the technologies "that can be deployed and used at the scale required to really make a difference for the nation."