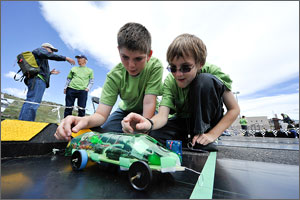 The call to advance America's energy research and development continues to make headlines across the nation. From President Barack Obama's state of the union speech touting American innovation, to a recent visit to the U.S. Department of Energy's (DOE) National Renewable Energy Laboratory (NREL) by Vice President Joe Biden where he declared "Science is back," NREL and DOE are leading the charge to bring meaningful math and science activities to students through events such as the recent Junior Solar Sprint and Hydrogen Fuel Cell car competitions.

The Junior Solar Sprint and Hydrogen Fuel Cell car competitions are just a couple of the educational tools NREL and DOE provide to teachers to help them educate students in scientific principles with an atmosphere of fun and excitement.

According to NREL's Education Coordinator Linda Lung, one of NREL's major education goals is to get renewable energy technologies such as solar panels and hydrogen fuel cells into the hands of future engineers, scientists and decision makers.

"This is a great engineering design challenge where students can see how changes in their car's transmission and gear ratios reflect in the car performance, exactly the same way engineers in the automobile industry would," Lung said. "I have witnessed the same schools come back year after year with better designs and faster cars. Teachers are so excited about this hands-on science competition, that they have incorporated the car competition as part of their science curriculum to meet the requirements of the state science standards."

The Colorado competition is organized by NREL's education program, which supports similar competitions in 26 states nationwide. It is designed to generate enthusiasm for science, technology, engineering and math (STEM) skills. 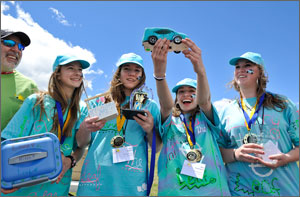 "To get kids involved in math and sciences, I think we need to get away from memorizing terms and reading a textbook to getting the kids doing science and creating their own experiments," Eric Benson, team coach and teacher at The Logan School for Creative Learning, said. "NREL's solar and hydrogen car races are fun and kids can then see the relevance of math and science."

Today's renewable energy and energy efficiency research and development is only part of the new energy equation. Educating students, teachers, and consumers is the other key to finding new renewable ways to power our homes, businesses, and cars.

"Our core classroom teachers will nudge kids who haven't tried as many math and science courses into this program," Benson said. "For our winning hydrogen team, one team member was really into the science and the other got energized about it as she worked on the car. It was great to see."

Girl power was a force to be reckoned with at the 2011 Hydrogen Fuel Cell car competitions at Dakota Ridge High School in Jefferson County, Colo.  An all-girl team from The Logan School for Creative Learning took first place in the Hydrogen Fuel Cell Car Speed Race with a car covering 10 meters in 4.82 seconds. 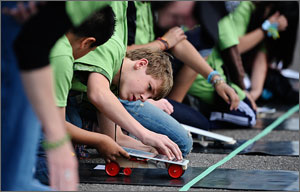 Getting the cars to go straight is a major engineering challenge for students.
Credit: Dennis Schroeder

If team spirit could be captured and converted to energy, then the all-girls team from Woodlands Academy could power a couple of city blocks with their enthusiasm. The team won best Hydrogen Fuel Cell Car Design and the coveted Spirit Award for good sportsmanship and respectful behavior.

"We modeled our car on the Nissan Leaf, the new electric car that is widely available to consumers," Team Captain Naia Tenerowicz explained.  "But, we put a twist on it because with electric cars you are still using coal, which has some emissions. But, with hydrogen fuel cells your only by-products are water and oxygen. We thought it was a great twist, plus it's an adorable car running down the track."

Choosing to focus on the design of a hydrogen fuel cell model car rather than a solar race car was a deliberate decision for team, "Larry the Leaf."  "We liked doing the hydrogen because there is more flexibility with the design since you don't have a solar panel sitting on top – instead you have a little cell inside," Tenerowicz said.

However, simply putting together a fuel cell car in the right way is not enough to win the design competition. "Explaining everything to the judges is key to show that you know what you were doing and understand it,  Tenerowicz said. "There was so much hard work that went into it, we measured everything and made sure it was perfect, and I think the judges understood that."

Competing on an all-girls team topped off the race for teammate Sam Henry, "We have an all girls team to break that stereotype that this is just for guys – and it's been awesome." 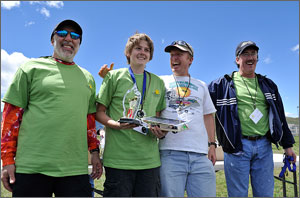 NREL's Ginley stands with the solar winner for speed and design from The Logan School for Creative Learning. Student Aiden Carley-Clopton is next to coach Eric Benson and Dale Furnell from Haselden Construction. Teammates Caleb Bevers and Ethan Evan are not pictured.
Credit: Dennis Schroeder

But boys were not sitting idly on the sidelines; on the next set of raceways they took home the big awards.  The Logan School for the Creative Learning's solar team named, "Thundercougarfalconbird" took top honor for design as well as having the fastest car at the event.  The team's car covered a 20 meter track in 5.95 seconds.

"I got involved through an elective course at my school called Vehicles of the Future," said team member Aiden Carley-Clopton.  His thoughts on winning the solar design contest echoed that of Team Larry the Leaf for hydrogen, "I think we won best solar design because I was able to explain how everything worked on the car and not just why I included it."

Coach Benson had another perspective. "To get ready we set up track in the hallway with fishing wire to test the cars.  The kids were really enthused. They would work, and then test, then get frustrated. Once they got their cars going straight, one student was even doing a 'happy dance' in the hallway.

"Getting the cars to go straight is one of the more challenging aspects for the teams. They would have to take the axles off, re-glue and try again.  And, that's how it works. You just don't build it right the first time. You have to fiddle with them and learn what is going on in order to make it better."