Best for Batteries: Not Too Hot, Not Too Cold 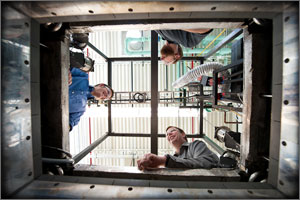 NREL's Large-Volume Battery Calorimeter has the highest-capacity chamber in the world for testing of this kind. From the bottom clockwise are NREL researchers Matthew Keyser, Dirk Long and John Ireland.
Credit: Dennis Schroeder

With average U.S. gasoline prices approaching $4 a gallon, drivers and automakers are thinking electric. Previously steered in this direction by concerns about pollution and dependence on foreign oil, consumer interest in electric-drive cars continues to surge. But before Americans are able to flip the switch from gasoline to electricity, automakers need batteries for the next generation of electric vehicles that can deliver the range, performance, reliability and safety drivers expect.

The Large-Volume Battery Calorimeter (LVBC) a crucial tool to help put these new automobiles on the road. Unveiled last year by the U.S. Department of Energy's National Renewable Energy Laboratory (NREL), the LVBC is designed to precisely measure the heat generated by batteries for electric-drive vehicles, analyze temperature's effects on systems, and help pinpoint  the ways to manage battery temperatures for the best performance and maximum life. The Vehicle Technologies Program at the Department of Energy supported the development and fabrication of the LVBC for advancing battery technologies for advanced vehicles.

To make electric-drive vehicles that are attractive to consumers, the batteries that power those cars need to be affordable, high-performing, long-lasting, and operate at maximum efficiency in a wide range of driving conditions and climates. The next generation of electric-drive cars and light trucks will be required to travel farther on electric power alone, placing greater energy demands on the vehicles' battery packs. As the packs get larger, regulating battery temperatures become even more important in helping improve performance, lifespan, safety and affordability. The best tool automakers have for assessing thermal control and optimizing battery performance is NREL's LVBC.

"NREL's large-volume battery calorimeter is the first system large enough and accurate enough to test the whole battery systems for electric vehicles," says Dr. Said Al-Hallaj, chairman and CEO of AllCell, a major battery integrator. "We strongly believe that this leading-edge instrument is critical in developing the battery management system of the next generation of electric vehicles." 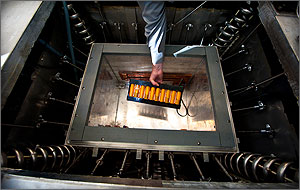 NREL engineer Matthew Keyser holds a A123 battery module over the calorimeter he designed and built with the help of his staff.
Credit: Dennis Schroeder

The largest and most-accurate device of its kind, the LVBC can determine the exact amount of heat generated by battery cells, modules, sub-packs, and even some full-size packs as they are charged and discharged. It combines a high volume test chamber and wide temperature range options with state-of-the-art thermal isolation and control, current load capabilities and precision measurement.

In addition, the LVBC is the only calorimeter designed to test the liquid-cooled batteries found in the Ford Electric Focus, the Chevy Volt, and the Tesla Roadster. GM used an earlier NREL calorimeter to help create the Volt battery.

"We knew there was a need for this technology. Testing cells and smaller modules in lower-capacity calorimeters was only giving us — and car and battery manufacturers — part of the picture," said NREL Senior Engineer Matthew Keyser, who developed the LVBC.

Despite the LVBC's large size, its heat-flux measurements are extremely precise, recording heat rates as low as 15 milliwatts and heat inputs as low as 15 Joules — about the amount of energy released while rubbing your hands together. Achieving this degree of sensitivity in such a large volume required a number of design innovations, including superior thermal isolation and the ability to test batteries under realistic driving conditions. The instrument is able to determine heat levels and energy efficiency within plus or minus 2 percent of actual values.

Troubleshooting Before Cars Hit the Road 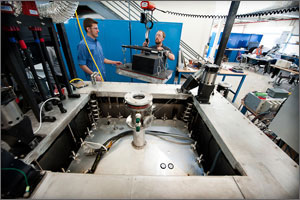 NREL researchers Dirk Long, left, and John Ireland attach the cover on the calorimeter that the group designed and built to conduct advanced research on batteries at the Thermal Test Facility at NREL.
Credit: Dennis Schroeder

Members of the U.S. Advanced Battery Consortium, which includes Chrysler, Ford and GM, realize that in-depth analysis of battery heat management issues can help automakers troubleshoot thermal issues and engineer systems capable of maintaining batteries within the ideal temperature range. The comprehensive and accurate information that the LVBC provides will be critical to the automotive and battery industry as new advanced batteries and thermal management systems are optimized for the next generation of electric-drive vehicles. NREL is testing batteries from a number of battery developers including A123Systems, LGChem-CPI, and Johnson Control Saft in the LVBC.

By addressing thermal management issues in the design stage, before these vehicles hit American roadways, carmakers are more likely to offer consumers affordable, high-performance options to gasoline-powered automobiles — and relief from high prices at the pump.