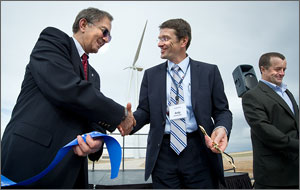 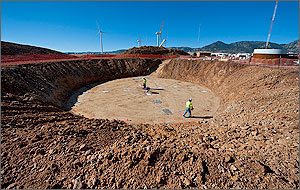 After placing sensors on the footprint of the Alstom Eco 100, workers from Michels Wind Power prepared the foundation for the concrete footing. The base of the tower was planted into a foundation that required 70 truckloads of concrete.
Credit: Dennis Schroeder

Blades longer than a basketball court, a tower the length of a football field, the 3-megawatt Eco 100 is the latest — and largest — wind turbine behemoth erected at the National Wind Technology Center (NWTC) near Boulder, Colo.

Built by French power-generation company, Alstom, the Eco 100 is being tested at NWTC, part of the U.S. Department of Energy's National Renewable Energy Laboratory (NREL), so it can be certified for use in the United States. Its certification will mean good-paying jobs in the United States for years to come, and what is learned during testing will bring the nation closer to DOE's target of 20 percent wind energy by 2030.

Alstom paid for the project and will benefit from the information the tests provide, but NREL and America as a whole also will benefit, speakers at the April 26 Turbine Dedication ribbon-cutting said.

The partnership will continue to produce results that "will strengthen our ability to harness the wind and power our future with clean, safe, and renewable energy," said John Cohen, Alstom Power's vice president for Government Affairs. He said the "what ifs" at the beginning of the partnership already are coming true. "What if a new technical process for turbine design accelerates expansion of wind power? What if together we make progress to meet tomorrow's energy needs? What if our push for innovation accelerates new clean-energy jobs in the United States?"

Alstom is building a manufacturing plant for the nacelles — the cigar-shaped enclosures attaching the tower to the blades — for the Eco 100 in Amarillo, Texas. The plant will open this fall and create and maintain 275 American jobs, NWTC Director Fort Felker said.  A single Eco 100 is powerful enough to supply energy to 2,000 homes and, with expected service life pegged conservatively at 20 years, could easily generate revenue in the tens of millions of dollars. 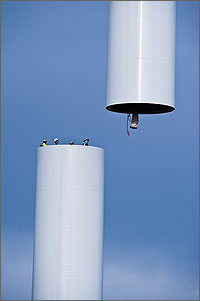 Four workers inside one section of the Eco 100's tower prepare to receive the next section hoisted by a huge crane.
Credit: Dennis Schroeder

The tests are measuring power performance, power quality, noise, and system frequency. Success in those tests already has given Alstom the IEC certification of its 60Hz model it needs to start sales and production in the United States. Ongoing tests will create a sophisticated engineering simulation model of the Eco-100 drive train. The turbine will go through long-term field tests for model validation that could last another several years.

NREL is measuring inflow conditions, including wind speed wind direction and air pressure and temperature, on a large meteorological tower at its National Wind Technology Center. NREL also is measuring voltage and current at 1Hz to establish a power curve — a plot of power versus wind speed. In addition, the tests will measure voltage and current fluctuations for their impact on the power grid. Later this spring, NREL will measure turbine noise by placing a microphone on a soundboard downwind of the turbine. Measurements will be taken at a wide range of wind speeds.

One of the largest cranes in the world lifts a section of the wind turbine's tower into place at the National Wind Technology Center in the shadow of the foothills south of Boulder, Colo.
Credit: Dennis Schroeder

The NWTC is the most extensive wind-turbine testing facility in the nation.

The NREL-Alstom partnership reinforces "how relevant NREL is to the wind industry," DOE's Deputy Assistant Secretary for Renewable Energy Steve Chalk said. The new turbine, together with the recent construction projects at NREL's Golden, Colo., campus, represents "investments that will really pay off down the line. It means NREL will continue to attract the best scientists, and that will lower the cost of renewable energy," spurring greater demand for it.

"We're extremely proud and excited to work with NREL and DOE," Andy Geissbuehler, vice president and general manager of Alstom Power Wind Business North America, said at the dedication ceremonies "We chose the right partner. We would like to continue the partnership and work with NREL on off-shore wind." 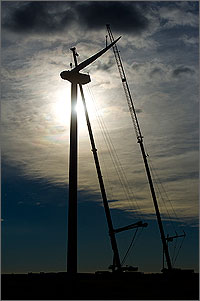 The sun sets on the Eco 100 Wind Turbine shortly after the first blade has been attached to the tower.
Credit: Dennis Schroeder

The Alstom Eco 100 turbine employs a novel drive-train design that isolates the gearbox from rotor loads, putting less strain on the gearbox.  That is a promising difference-maker because the wind industry worldwide has been addressing the problem of gearbox reliability for several years.  NREL heads a consortium of turbine manufacturers, utilities and suppliers, the Gearbox Reliability Collaborative, that examines ways to improve designs and retrofits for gearboxes.

"This has the potential to greatly improve gearbox reliability," Felker said. "Through this project with Alstom, NREL will develop a comprehensive understanding of this innovative drive-train topology."

Soaring High Over the Prairie

Never has a wind turbine churned wind as high above the ground at the NWTC as the 3-MW Eco 100. How big is it?

The entire turbine weighs about 600 tons, with each of the three blades weighing about 11 tons, said Rodrigo Vallejo Paez, project manager for Alstom. The 33-foot by 16-foot (10-meter by 5-meter) nacelle, which cradles the gear box and other instruments high up on the tower, weighs 95 tons.

When one of the three 160-foot-long (50-meter-long) blades of the turbine is at high noon, the entire structure reaches more than 400 feet (130 meters) above the ground. 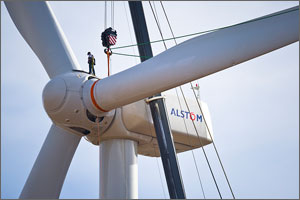 A worker from Michels Wind Energy prepares to release a harness after the third and final blade was attached to the Alstom Eco 100 wind turbine.
Credit: Dennis Schroeder

To ensure that the behemoth withstands 90- to 100-mph winds blowing from the mountains to the west, the base of the tower was planted into a foundation that required 70 truckloads of concrete.

Alstom hired Michels Wind Energy to install the turbine. Stage-by-stage, one of the largest cranes in the world, lifted turbine parts above the short-grass prairie of rural Boulder County, Colo., in the shadow of the Rocky Mountains in December.

The crane, from Mullen Crane Services of Soda Springs, Idaho, has a lift capacity of 1,350 tons. The graceful bend in the blades, supplied by LM Wind Power, would look at home in a museum of sculpture. The blades are shaped to have pre-bend in the upwind direction — a reverse camber that hooks into the wind. The aerodynamic forces will bend the blades downwind, ensuring that the blades don't hit the tower under any weather condition. 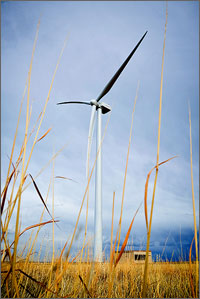 "People don't appreciate how much power these machines have," Felker said. "It's a tremendous job to install a 3 MW wind turbine."

The 90-meter tower arrived in five giant sections. The 50-meter-long rotor blades were shipped on special trucks. "Meticulous engineering and planning was required to ensure that the project proceeded safely," Felker said. Ironworkers, millwrights and electricians were among the skilled workers who erected and installed the turbine and its instruments.

Wind energy has been one of the fastest-growing segments of the U.S. electrical system for many years, and will be an essential part of the transformation to clean energy, Felker said.

Jeroen van Dam, NREL's project manager for the Alstom project, agrees.  "Wind power is a clean energy source that can be rapidly deployed, is abundant and creates manufacturing jobs," he said. "It is already cost-competitive with fossil fuels in a lot of locations and it doesn't use any water."

Felker said it's important that the United States commit long-term to wind energy. "Too often in the past, the wind industry has been buffeted by expiring short-term policies. A policy needs to be in place that recognizes that wind energy provides renewable energy at a competitive cost, with no carbon emissions and with the lowest water consumption of any electricity-generating technology."