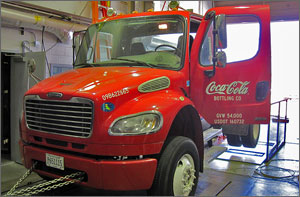 NREL and Coca-Cola Refreshments teamed up for a year-long technology evaluation of their hybrid electric delivery trucks. NREL researchers will provide a comparison of fuel economy and operating costs between the hybrids and the diesel trucks in use.
Credit: Patrick Curran

With all of the delivery trucks on U.S. roadways this holiday season, it is easy to see why researchers at the U.S. Department of Energy's (DOE) National Renewable Energy Laboratory (NREL) are focused on evaluating the latest energy-saving technology that is commercially available in the medium and heavy-duty truck markets.

From the beverage industry to package delivery companies, fleet managers are looking for ways to green their fleets by achieving better fuel efficiency and fewer emissions while maintaining an eye on the company's bottom line. "We focus on a number of factors that affect a company's fleet, from emissions to reliability to cost," Senior Project Leader Kevin Walkowicz said. "Cost is the number one barrier to companies using advanced technologies and commercial fleets are always concerned about maintaining profitability. Companies need to understand if these vehicles are going to save them money, or cost them money, over the long run."

NREL is specifically equipped to tackle this type of research thanks to its Renewable Fuels and Lubricants (ReFUEL) Research Laboratory. ReFUEL is outfitted for testing advanced fuels in heavy-duty engines and vehicles as well as advanced heavy hybrid vehicles. It also was the first independent laboratory in the U.S. with a heavy-duty chassis dynamometer that was able to accurately measure tailpipe emissions from trucks with diesel engines that meet the stringent 2007 standards set by the Environmental Protection Agency.

"There are three main tools we use when evaluating these types of heavy-duty hybrid vehicles — data provided by the fleet, data we collect at ReFUEL and data we collect by logging it in the field," Walkowicz said. "After we're done with testing, we try to provide information that is useful to other fleets so they can see who has tried the technology, what the results were, and what were the benefits."

While it sounds like a lot of information, using the three data-stream approach allows researchers to compare how the new vehicles stack up against conventional models in the fleet.

"We test a baseline group alongside a similar number of hybrid vehicles so we can compare the new technology against the old," Walkowicz said. "We are looking for differences in fuel economy, emissions, maintenance, operating cost and reliability."

Walkowicz also noted that advances in data logging are helping researchers get a valuable real-time snap shot of how these vehicles perform while "on the job."

"We can log into the vehicles remotely, gather everything from GPS to battery temperatures to all of the information available on the vehicles' computer — which can consist of hundreds of channels of digital data being monitored. Data is king — the more data we gather, the easier it is for us to point out a few things to help the operators optimize and use the vehicles more efficiently. Where it can be a trial and error process for the company, we can look at the data and tell them very quickly how these vehicles and advanced technology systems are performing in different operating conditions."

Industry is taking notice of NREL's abilities. In the last two years, FedEx, UPS and Coca-Cola Refreshments have all teamed with NREL to evaluate their hybrid fleets.

Just this year, NREL and Coca-Cola Refreshments teamed up for a year-long technology evaluation of their Miami-based, class 8, hybrid electric delivery trucks. At the end of testing, NREL researchers will provide a comparison of fuel economy and operating costs between the hybrids and the diesel trucks in use.

Coca-Cola Refreshments' large hybrid trucks are equipped with the latest generation of a parallel hybrid system manufactured by Eaton Corp. These trucks can weigh in at as much as 55,000 lbs. The system includes regenerative braking and lithium-ion batteries that provide energy storage. Energy that is normally lost during braking is captured, stored in the batteries, and used to power the electric motor.

The trucks were tested at the ReFUEL facility in August 2010 using drive cycle data obtained from their Miami fleet as guidance for creating the laboratory test plan. Fuel economy and emissions were measured and the test results will be compared to on-road data that is being gathered currently. Final study results will be available in summer 2011. 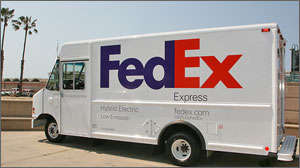 "Performing a field evaluation of gasoline-hybrid delivery trucks in Los Angeles and then testing them at ReFUEL was a unique project because they are using gasoline engines coupled with a hybrid system, rather than diesel," Walkowicz said. "At the time of the study, the gasoline hybrid option was investigated for use in the Southern California location since it was an option that could reduce NOx and particulate matter while maintaining efficiency compared to the diesels available at the time."

NREL researchers also tested a conventional diesel vehicle and a gHEV from the FedEx Express fleet at the ReFUEL laboratory. Researchers found the benefit for the gHEVs was indeed in the tailpipe emissions. "The fuel economy for the gasoline hybrid wasn't much better than a diesel so there was not much of a fuel savings," Walkowicz said. "But, when we brought them to the lab, it proved out how much cleaner the hybrids were — the tailpipe emissions were substantially reduced."

The interim report on the FedEx testing

was released in May and final results will be published in the coming weeks. 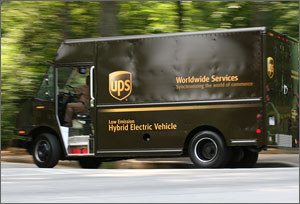 Compared to conventional vehicles, NREL testing showed the hybrids improved fuel economy by 28.9 percent in the field; resulting in a 15 percent reduction in operating cost per mile. The final report

, released in December 2009, details the year-long evaluation, including how the NREL team collected and analyzed fuel economy and other vehicle performance data while the vans stayed in service. The project team also tested a conventional and hybrid delivery van at ReFUEL and documented fuel economy and emissions performance.

After the NREL study, UPS ordered an additional 200 Eaton hybrid vans for its fleet. NREL is continuing to work with UPS into 2011 to evaluate vehicles from the additional order in a UPS fleet in Minneapolis.

As these recent examples show, "Our testing helps NREL, DOE and industry understand how much progress is being made for these types of vehicles," Walkowicz said. "It also helps us understand the technical and commercial barriers that need to be overcome in order to make these vehicles mainstream products in the industry."

These projects are part of a series of evaluations performed by NREL for the AVTA, DOE's Advanced Vehicle Testing Activity. AVTA bridges the gap between research and development and the commercial availability of advanced vehicle technologies that reduce petroleum use and improve air quality in the United States. The main objective of AVTA projects is to provide comprehensive, unbiased evaluations of advanced vehicle technologies in commercial use.

Learn more about NREL's Center for Transportation Technologies and Systems and the Renewable Fuels and Lubricants (ReFUEL) Research Laboratory.