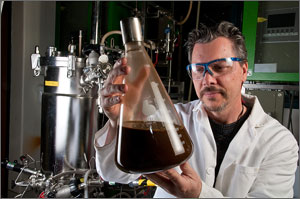 The work ranges from jointly identifying and developing critical aspects of renewable energy technology to accelerated testing of 3M designs and scaling-up successful prototypes for commercial production. The partnerships are covered in three Cooperative Research and Development Agreements, or CRADAs, which last for at least one year. The total combined value of the shared R&D covered by the agreements is $7.33 million.

With $23 billion in annual sales, 3M employs 75,000 people worldwide and has operations in more than 65 countries. It is one of the Laboratory's largest commercial partners.

"CRADAs like these with 3M are critical for achieving the marketplace impact that is the goal of NREL's work in renewable energy," NREL Senior Vice President of Commercialization and Deployment Casey Porto said. "Not only do they help shift the nation to clean energy, but they also establish and expand important partnerships for product development through technology transfer."

"3M's wide-ranging expertise and commitment in these fields makes this a key partnership for the laboratory because this type of partnership enables the creation of clean energy breakthroughs that can become products," she said.

"3M is excited for the opportunity to tap into NREL's expertise and understanding of a variety of solar modules and the interplay between the materials and systems," said Mike Roman, general manager and vice president of 3M Renewable Energy Division. "Also, NREL has pilot plant capabilities, which allow valuable application testing of 3M's biofuel separations technologies in a controllable and scalable environment." 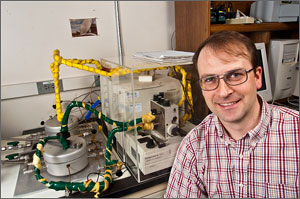 3M and NREL will work to develop and test new moisture barrier films and flexible packaging for thin film solar cells made of semiconducting layers of CIGS, or Copper Indium Gallium Diselenide.

CIGS cells have achieved a record efficiency of 19.9 percent at NREL. But to become commercially successful, manufacturers need to both increase module performance and reduce manufacturing costs.

The solar cells are expected to work effectively for 20 years. That means they will need to be encapsulated in a flexible material that is transparent to light, but also provides durable protection — and doesn't add significant costs.

NREL will conduct accelerated stress tests, including temperature, humidity and irradiance tests, to establish failure barriers on as many as three types of 3M CIGS designs. The Lab and 3M will jointly interpret the results with the aim of establishing module standards for a 20-year lifetime.

Principal investigator Mike Kempe said much of the testing will revolve around measuring the rate of water vapor transmission in moisture barrier samples.

"We test their moisture barrier materials to determine if they give adequate protection to the CIGS cells," Kempe said. "They want expert eyes looking at these materials before they go to the PV industry." 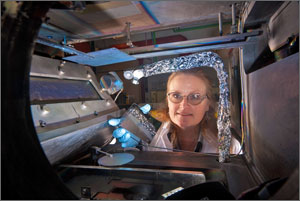 It's work that started 25 years ago with a 3M reflective coating known as ECP305+, Principal investigator Cheryl Kennedy was new to the Laboratory's CSP staff when she shared a patent on the reflective coating.

Today 3M is working with Kennedy again to develop a new version of the solar mirror film. The original solar mirror film was supposed to work reliably for 10 years, but in field tests it is still maintaining its reflectance after at least 15 years of outdoor exposure.

In a second related effort, 3M and NREL will develop a durable, cleanable hard-coat surface for the top layer of the metalized polymeric mirror films.

"At first people thought coatings to prevent CSP mirrors from getting dirty was too futuristic," Kennedy said. "Now the CSP market is taking off. They are looking for coatings that will help mirrors remain highly reflective for 30-50 years with minimal scratching and cleaning. That's how long a coal-fired power plant stays online generating electricity, so CSP systems need low-cost mirrors that maintain high specular reflectance for extended lifetimes outdoors in order to be competitive."

In a third related effort, 3M and NREL will test the new polymeric mirror films and compare the performance using a service lifetime model first developed with the original ECP-305+ reflector. NREL will characterize the new film's optical performance and durability by conducting tests in accelerated weathering chambers that use xenon arc lamps to simulate extreme and accelerated conditions of light, temperature and humidity at about seven times typical outdoor exposure.

A new 3M prototype liquid-liquid separations technology uses a membrane to significantly increase the concentration of ethanol extracted from a fermentation broth. The new method does not rely on heat to evaporate water in the broth and reduces the distillation energy required to separate water and ethanol.

3M wants to test and scale-up the new technology for both the existing conventional corn-based ethanol industry and for the emerging lignocellulosic ethanol industry, which produces ethanol from the tougher parts of plants — like stalks, cobs and leaves — that are not part of the food supply.

Archer-Daniels Midland is the among the largest U.S. corn ethanol producers, and will test the 3M prototype in one of its pilot plants.

"The membrane technology has to be cheaper than the standard distillation method of recovering ethanol," said principal investigator Dan Schell. "We're trying to be more aware of separation as a unique step in the process and take advantage of it."