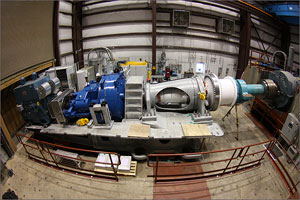 The King Kong of wind turbines battled the Godzilla of dynamometers to a draw.

It was the greatest amount of power ever measured at NREL's dynamometer lab, and the largest full-scale dynamometer test of a wind turbine drive train ever done in the United States.

They turned to NREL because its dynamometer can simulate worst-case wind conditions 24 hours a day. In a few months of testing, a manufacturer can learn whether its gear boxes, bearings and cog wheels will stand up to real-world conditions.

NREL's 2.5-megawatt dynamometer is outfitted with a powerful 3,550-horsepower electric motor coupled to a three-stage epicyclic gearbox. The motor can produce speeds up to 30 revolutions per minute, simulating everything from soft breezes to backbreaking gales.

Decades of Data in Two Months of Testing 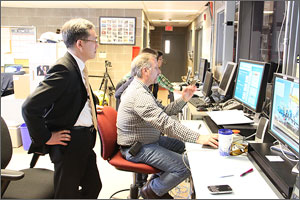 "If we tried to get this information out in the field, it would take years to acquire this kind of data," Ed Overly, master research technician and dynamometer gatekeeper at NREL's National Wind Technology Center (NWTC), said. "We run the turbine under test conditions for 24 hours a day, seven days a week at 2.1 megawatts. We can monitor how all the fluid and bearing temperatures equilibrate at their maximum points. We see how well the inverter operates under different load conditions to detect if there are any unknown faults."

"Doing this test with Samsung has given us the experience of testing a very large machine at the Dynamometer Facility, which we've never done before," Overly said.

Samsung already has a similar sized (2.5-megawatt) wind turbine running in Lubbock, Texas, that can provide electricity for 1,800 homes, said In-kyu Kim, manager of the Wind Turbine Development team at Samsung. But the company had never tested one of its turbines above 600 kilowatts.

Jaedoo Lee, manager at Samsung Heavy Industries, said his company chose NREL "because we needed to test for performance and we know NREL is prestigious. We like to simulate and test all the tough and extreme conditions that would happen in the real world."

"We wanted a third-party test for quality," Lee added. "NREL is the perfect test facility for us. We'd like to keep working with them as we develop wind turbines for off-shore uses." 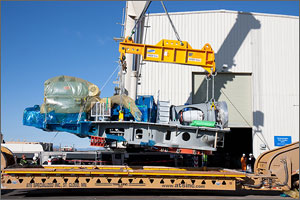 How did the huge wind turbine drive-train make its way into the dynamometer's test bay?

"It was a monumental task," Overly said. "We had to move 200,000 pounds of equipment out of here and clean up the whole high bay, then move in the Samsung turbine – within a week."

A 185-foot-long, 19-axle rig hauled the drive train and electrical equipment from Houston to the NWTC. Then a 400-ton crane moved the drive train onto a track and cart system, temporarily laid just for the move. "We off-loaded it and brought it into the dynamometer in one piece," Overly said. It's the largest piece of equipment ever installed in the Dynamometer Test Facility.

The software used by NREL and Samsung tells the dynamometer what kind of torque it should give the drive train.

"We want to provide an accurate reproduction of loads the drive train will see in the field," NREL senior engineer Robb Wallen said as the dynamometer put the Samsung drive train though its paces last month. "The tower, rotor and blades are represented by computer models which interact in real-time with the drive train and turbine control system just like their real counterparts."

Using a virtual wind-speed profile the computer model calculates what the main shaft torque should be and sends the torque commands to the dynamometer. "The end result is the drive train responding to a variety of wind conditions as it would in the field," Wallen said. It's a very sophisticated test and it's never been done here before."

The tests, which ran for a couple months early this year, "accelerate the startup, the actual checkout, as well as spotting any kinds of deficiencies," Overly said.

NREL is the only place in the nation where "you can run a wind turbine under load conditions, watch it operate real-time, be standing near to it and hear how it operates," Overly said. "You can't accomplish that up in a wind turbine in the field."

Meanwhile, NREL is taking the next giant step – designing a 5-megawatt dynamometer that will be capable of testing most of the large turbines expected to roll off humungous assembly lines in the next decade.