When it comes to designing an interior decorative feature for one of the most energy efficient office buildings in the world, very few would consider bringing in a beetle to do the job. But that's what happened at the U.S. Department of Energy's (DOE) Research Support Facility (RSF) located on the National Renewable Energy Laboratory (NREL) campus.

In June, the RSF will become home to more than 800 workers from DOE and NREL and building visitors will be greeted with a soaring, two-story high wall entirely covered with wood harvested from the bark beetle infestation that has killed millions of pine trees in the Western U.S.

But, the use of beetle kill wood is just one example of the resources being leveraged to make the RSF a model for sustainability and one more step toward NREL's goal to be a net zero energy campus. 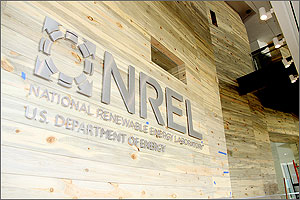 More than 19,000 linear feet of wood from trees killed by bark beetles was used to decorate the lobby of the new RSF. The curves and tilts in the wall make it a work of art.
Credit: Heather Lammers

The swath of devastation brought about by the little black bark beetles began in Colorado in the mid-1990s. Since then, bark beetles have killed pine trees on more than 3.5 million acres in Colorado. The beetle invasion also plagues pine forests from Wyoming to South Dakota.

But, for the architects and designers working on the RSF, the bark beetle infestation meant an abundant source of wood close to the construction site that fit numerous project constraints.

"The designers specifically looked for regional materials that allowed for creative expression within the RSF and were within the budget of this project," Philip Macey, RSF project manager for Haselden Construction, said.

Harvested within 500 miles of the RSF, the 19,000 linear feet of beetle kill wood covers an entire side of the RSF atrium. But this is no ordinary wall. As it climbs through the lobby space, the wall tilts in and out giving it a 3-D look all its own. Architectural firm RNL "designed it as a wood wall," Macey said. "But the subcontractors made a piece of art. It's arguably the best wood working that I've ever seen on a project."

"The wood was a point of apprehension from a safety perspective," Macey said. "DOE gives safety a high priority. Contractors had to prove to DOE that the wood could be fire treated and finished in an environmentally friendly way."

Contractors for the RSF went so far as to take a sample of the finished, fire-treated wood to the lab to have it tested with a live flame. They even videotaped the process to demonstrate the safety of the pine wall. 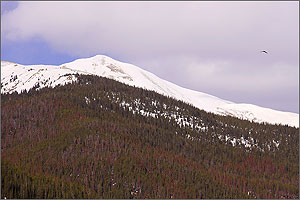 According to Macey, the effect is sure to raise eyebrows and garner curious stares since it doesn't really look like wood, it somewhat resembles stone, but then again it doesn't look like any stone you've ever seen.

The flooring in the RSF lobby is stone, also a made from commercial scraps – granite. The large flooring tiles are made from waste granite chips that are the leftovers from fabricating big slabs of granite. The chips are fused together with ceramics creating a sturdy tile.

"It again speaks to a deep respect for the planet in using waste materials in innovative ways that we used to previously just send to a landfill," Macey said.

Not the First Time NREL has Used Beetle Kill

In 2008, NREL brought online its Renewable Fuel Heat Plant (RFHP). "The RFHP is a wood burning boiler that we get comfort heat from using chipped beetle kill wood, and it has the potential to reduce NREL's natural gas usage by 75 percent," NREL Director of Sustainability Frank Rukavina said.

This plant provides heat to more than 500,000 square feet of laboratory and office space through NREL's district heating system. In 2009-2010, the RFHP burned 850 tons of wood chips displacing 10 billion BTUs of natural gas. And, equipment upgrades this summer will substantially increase wood consumption.

The wood chips, which are about half of the cost of natural gas, are sorted for over-sized chips and then automatically fed into the furnace's combustion chamber. Combustion is controlled using an oxygen sensor to ensure optimum air-fuel ratio and temperatures exceed 1,700° F. The system produces less than 1 percent ash by volume and the ash is recycled by a landscape mulch company. The RFHP's efficient combustion process allows the facility to meet state requirements while burning biomass to reduce the NREL's carbon footprint. 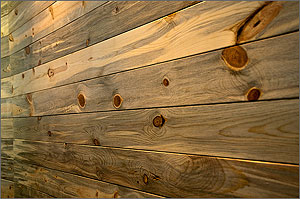 Lumber, furniture and other interior decor made from bark beetle lumber is known for beautiful grains with hints of blues and grays. But contractors had to prove to DOE that the wall could be made fire resistant in an environmentally friendly way.
Credit: Pat Corkery

"NREL's sustainability focus is, how do we operate to be as effective as possible with the smallest footprint and impact on future generations?" Rukavina noted.

According to Rukavina, characteristics of a sustainable campus include minimizing use of resources including energy, materials, and water — along with balancing environmental, economic, and human impacts. In the case of the RSF, the focus also is on attaining LEED Platinum status from the U.S. Green Building Council.

"Our goal is to have the RSF function as a LEED Platinum net zero building with our long-term goal being a net zero energy laboratory," Rukavina said. "We are doing that by buying and installing as much renewable energy as possible as well as through power purchase agreements."Net zero energy means a building – or campus – makes as much energy from renewable resources as it consumes in a year.

The RSF will go a long way in helping NREL boost the amount of renewable energy generators on its South Table Mountain campus.

"We currently have photovoltaics installed on the mesa top and buildings known as the S&TF (Science & Technology Facility) and SERF (Solar Energy Research Facility). But RSF 1 and RSF 2 will have PV on the roof tops along with a visitor parking lot and parking garage covered in PV," Rukavina said. "Our current PV and planned construction of PV means that NREL's South Table Mountain campus will get 32 percent of our energy usage from the sun."

NREL is also using wind to offset energy use at its National Wind Technology Center (NWTC). The NWTC is already at net zero energy with wind turbines and a PV array currently producing all of the NWTC's power needs.

Other sustainability highlights in the RSF include:

Haselden Construction and RNL are building the 222,000 square-foot Research Support Facility building, which is designed to be a model for sustainable, high-performance building design, and will provide DOE-owned work space for administrative staff who currently occupy leased space in the nearby Denver West Office Park. The RSF was designed by RNL. Stantec Consulting served as the project's engineering consultant.