Putting the Forklift before the Horseless Carriage 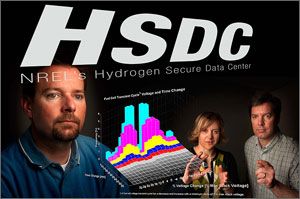 Forklifts hoist, stack and stow a big chunk of the nation's goods, and have been doing so for 90 years, powered by gasoline and electricity.

Hydrogen fuel cells are much newer, yet already proving themselves in early markets, with the goal of one day providing clean, safe renewable energy to the nation's and the world's transportation fleet.

Warehouse workhorses of the 20th century meet the most intriguing fuel of the 21st.

In warehouses across the nation, hydrogen fuel cells are being tested in forklifts, to see how the emerging technology fares compared to conventional batteries in cost, performance and safety.

How well hydrogen fuel cells perform in forklifts and in other early-market applications such as backup emergency power, stationary power and portable power is a key step. If they prove themselves, that will accelerate the development, manufacturing and cost-reduction necessary for their widespread use the automobile industry and elsewhere.

The U.S. Department of Energy's National Renewable Energy Laboratory (NREL) is playing a crucial role, as the independent, third-party assessor of the performance of the early fuel cell market demonstrations funded by DOE.

Indispensable to that effort is the Hydrogen Secure Data Center (HSDC) at the National Renewable Energy Laboratory. A team of NREL engineers is gathering data from a dozen early users of hydrogen fuel cells, assessing how well the fuel cell systems fare in the real world, with a focus on performance, operation and safety. They began analyzing data from fuel cell vehicles in 2005.

The testing is such a priority of the Department of Energy that a year ago in April 2009 it offered approximately $42 million in American Recovery and Reinvestment Act money for sites to install and operate fuel cell units in real world applications.

The dozen companies selected for the grants collectively put up $51 million of their own money, making it a $93 million project.

The NREL group is working with fuel cell and hydrogen developers as well as end users across the country. 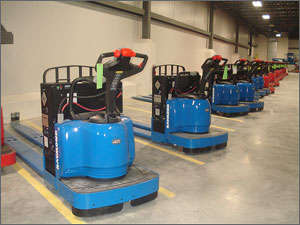 Forklifts capable of operating in hot or cold conditions are ready for use at a Sysco warehouse in Houston. NREL engineers are analyzing the operation and performance of these fuel cell forklifts and others elsewhere.
Credit: Jennifer Kurtz

Some 90,000 new forklifts are manufactured yearly and delivered to warehouses from Maine to Hawaii. Their average cost exceeds $15,000.

Electric-powered forklifts are a big improvement over the gasoline-powered lift trucks of the 1940s and 1950s – just ask the operators who breathed gas fumes trapped in narrow warehouse aisles.

But there are some performance limitations of battery forklifts, such as voltage sag as the batteries' state of charge decreases. Early in the shift, there's plenty of power in a fully charged battery, but the forklift slows down as the battery drains. When the performance gets too slow the battery has to be changed. That means keeping a battery always in reserve, and it means about 20 minutes of downtime while the switch is made.

Efficiency-driven companies such as the food-supply giant Sysco lose money each minute a forklift is down.

Hydrogen fuel cells, by contrast, deliver a constant flow of energy. Refueling takes about three to five minutes, versus the 15 to 20 minutes it takes to change out a battery, says Jennifer Kurtz, team leader for NREL's ARRA Early Fuel Cell Market Demonstration and Validation Project.

NREL's data analysis helps Sysco and the other companies understand how the fuel cell and hydrogen units are performing along with comparisons with competing technologies.

A forklift-intensive warehouse "looks like chaos" to an outsider, but the operation is effectively organized for productivity, Kurtz said. "They have productivity measures, such as how much material is moved per eight-hour shift," Kurtz said. So, a forklift that doesn't slow down as the hours pass, or a forklift that can be refueled in four minutes, rather than have its battery replaced in 20 minutes, can have a positive impact on productivity.

"Even if it comes down to one minute of productivity gain, that's a noticeable improvement for warehouses where forklift use is really maxed out," Kurtz said.

"It's been a great partnership," said Katrina Fritz Intwala, vice president of business development and government relations for Plug Power, which sells fuel cells for forklifts, stationary power and other uses.

"NREL is very collaborative, we have meaningful back-and-forth discussions on their data that is very useful for us to see how our units are operating in the field. They gather information on how our units are fueled, when they're filled, what's the run time on the fuel, how long our units run between fuelings, to what pressure are they fueled. We're able to get a better understanding of how our customers are using our products and how they're performing."

Also useful for Plug Power is seeing how their fuel cells compare to battery packs or internal-combustion engines. 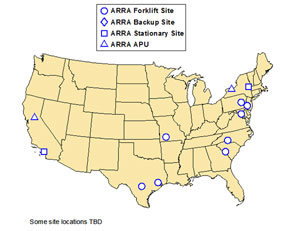 The fuel cells also are being tested by organizations that have crucial needs for backup power such as telecommunications and emergency responders.

Typically, that backup power is supplied by diesel, but organizations are eager to explore the advantages of fuel cells.

Mark Cohen, director of product management for ReliOn, said the NREL data "provides more credibility to a customer" than merely having the manufacturer produce its own data to extol the virtues of the product.

He said the partnership, together with the ARRA money, will help accelerate the rate at which his company's hydrogen fuel cells are deployed for backup power in critical communications settings, "while clearly demonstrating the performance and environmental benefits of the technology."

NREL's HSDC had to find a way to deliver useful information to the companies without betraying their internal secrets.

"We protect the proprietary data by creating composite data projects," Kurtz said. (HSDC results are online) "The data are aggregated across all the project partners." That way, each company can see its own data, and how it compares with the aggregate data, but can't hone in on a competitor's specifics. "It's a way of having commercially sensitive data reported on, without revealing a company's proprietary information," Kurtz said.

If fuel cells prove efficient and are adapted widely in transportation and emergency services, they are expected to generate tens of thousands of jobs in manufacturing and maintenance.

They also will help end dependence on foreign oil and keep hundreds of millions of tons of carbon dioxide out of the atmosphere.