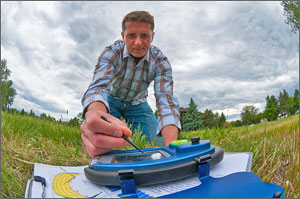 The land is cheap, often abandoned, close to such necessary infrastructure as power lines and roads, is often properly zoned, and no other developers are rushing to erect anything on them.

The U.S. Department of Energy's National Renewable Energy Laboratory is evaluating sites for renewable energy potential on behalf of the Environmental Protection Agency.

"The big driver is using land that otherwise couldn't be used," said James Salasovich, an NREL engineer who has evaluated so-called landfill "brownfields" in Puerto Rico and Wisconsin.

"Google Earth will tell us the area of the landfill, but to get a good idea of where the hills and shading obstacles are, you really have to visit the site," he added.

Photographing the Full Sky for its Full Solar Potential

Salasovich and other traveling NREL engineers start with a device called a SunEye that has a fish-eye lens to take a photo of the sky above the landfill. "We point this thing south and take a photo," he said. "It puts out a spherical graph and shows you where the shade will be by what time of day and what time of year." An algorithm built into the SunEye can detect differences between, say, the sky and a tree.

For a site with wind potential, the NREL engineers install a meteorological tower with instruments to read wind speed and direction, said Joseph Roberts, an engineer with the National Wind Technology Center at NREL. After 12 months of measurements, they can get a read on the average wind speed, seconded by data from nearby airports. The NREL crew members also check the distance to the nearest roads and transmission lines, evaluating the sites' potential for using renewable energy and making it work economically. 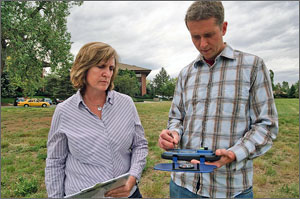 Potential sites are culled from the Environmental Protection Agency's list of Superfund and Brownfield sites – and Resource Conservation and Recovery Act (RCRA) sites.

In some cases, the renewable energy apparatus going up is powering the ongoing clean-up efforts at the sites.

In other cases, the wind turbine, solar array or hydro power is bringing power to nearby schools, senior centers, offices and cities. That's most feasible if the site is close enough to transmission wires to tie into the grid. There are some 11,000 sites in the United States with some past or current environmental contamination problem that may hold potential for renewable energy, said Gail Mosey, senior energy analyst in NREL's Strategic Energy Analysis Center.

It's a great opportunity to reuse these lands for power generation – with no help from fossil fuels, she said.

Erecting Devices without Disturbing the Contamination

Some sites, particularly Superfund sites, are so contaminated with toxic chemicals and heavy metals that the earth ought not be disturbed, Mosey said. "But there are a lot of others that can endure a slight intrusion. There are workable solutions for installing renewable energy on the surface or outside the contaminated area."

Solar arrays can fit comfortably atop the two feet of dirt and liner that typically top a condemned landfill, for example.

There are even wind turbines supported by guy wire and a surface mounted concrete footing that can generate energy without burrowing down into the muck of a Superfund site.

"These are places where you wouldn't necessarily want to put a housing development, to pour a foundation or to have people plant backyard gardens," Mosey said. "But they present as excellent sites for renewable energy."

Brownfields could be former industrial sites abandoned when the owners went bankrupt. There might have been paint or fuel spills there, among other possible insults, but the exact source of contamination may not be known. Superfund sites, by contrast, usually have a responsible party identified.

Brownfields run the gamut from being ready for redevelopment to needing a great deal of remediation. 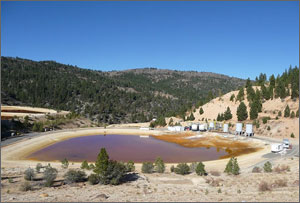 This holding pond at the shuttered Leviathan Mine in California is too contaminated for most uses, and is in full clean-up mode. NREL engineers have convinced officials there to erect wind turbines on the site to reduce the need to truck in diesel fuel each day to power the clean-up efforts.
Credit: Joseph Roberts

In the case of Superfund sites, the NREL people are sometimes working on the site even before the final Record of Decision has been issued. In those cases, NREL suggests options. For example, there is a groundwater cleanup effort at the Leviathan Mine in California, with trucks hauling petroleum up the mountain roads to power the cleanup operations. "We told them they could be cutting back their trips if they installed a wind turbine or PV," Mosey said.  "This solution can be factored in the decision."

A brownfield or other contaminated site "can be a blight on a community, land that nothing else can be done with for a number of years," Mosey said. "It's a constant reminder of what the former use was on that site. Rather than just let it sit there fallow, this presents an excellent opportunity for power generation."

Add in RCRA and Superfund sites and abandoned mine lands and there are more than 11,000 sites, totaling over 14 million acres.

That's enough room to power a big chunk of America with wind turbines and solar energy.

Of course, not all those acres are suitable for renewable energy. They could be too sloped, too shady, too contaminated to be useful.

That's where the NREL team is valuable, assessing the properties at sites across America, applying screening criteria and then conducting feasibility studies.

NREL developed criteria that must be met to become a high-potential site. What is the renewable energy resource potential?  Is it close enough to transmission lines to feed the grid? Is it near enough to graded roads for renewable energy installation to be feasible?  How large is the site and how sloped is the land?

"Not only do you need technical feasibility, but you have to consider economic feasibility," Mosey said. "If it isn't near transmission, at a million dollars a mile to build transmission lines, that's just cost-prohibitive."

Mosey and her teammates have seen the best of human nature emerging from some of the ugliest of landscapes.

"We have citizens who are single-handedly making it happen," Mosey said. "They're trying to make good out of bad."

In the anthracite coal region of Pennsylvania, Peter Haentjens, a descendent of the family that tried to pump water out of a huge coal field, is leading the effort to bring hydro power to the notorious Jeddo Tunnel.

The Jeddo Tunnel was dug in the late 1800s to try to move water out of coal formations.  The attempt backfired, sweeping dangerous heavy metals down with the acidic water. Today, the Jeddo Tunnel drains 33 square miles of coal basins — bringing 60 million gallons a day of contaminated water to the Little Nescopeck Creek watershed.

"You get this orange residue out of the rock if the water is picking up iron," Haentjens said. "You get gray if it's manganese and white if its aluminum."

"It kills most of the aquatic life in the streams for 17 miles," Haentjens added. "Aluminum, especially, is pretty toxic.

All that flowing water can help run a downstream pump station for a sewage treatment plant, as well as power a school and a senior home, he said. And it can do that even while engineers work on a long-term solution for the contaminated water – and try to find money to pay for it.

When the tunnel was built more than a century ago, the dirt that was dug was set on either side. That same dirt could help build a dam to raise the level of the water some 35 or 40 feet, Haentjens, who is with the non-profit Eastern Middle Anthracite Region Recovery group, said. "We could get pressure to make 150 kilowatts. That could bring in $120,000 of revenue per year.

"It's mostly wetlands so it's not really developable," Haentjens added. "We'd like to make an environmental park out of it. There would be an educational component for hydroelectric energy, as well as a history of the tunnel and the acid drainage and its effect on the environment."

"The NREL people are looking at the economic justification of doing that — of how much we can sell the energy for and the cost of building the dam. The focus is to create economic value and at the same time improve the environment," he said.

"The guy is just on a mission to solve this thing," Mosey said of Haentjens.

Next step: Expansion to the U.S. Forest Service, Bureau of Mines

In 2008, EPA awarded NREL $650,000 to conduct feasibility studies at 13 different projects, including one in Puerto Rico.

Mosey hopes to expand the program so NREL can evaluate contaminated sites for other federal agencies such as the Bureau of Mines, the Bureau of Reclamation and the U.S. Forest Service.

"In a lot of cases, the land is cheap, maybe even owned by the state," Mosey said. "They're just happy to have some positive re-use and some sort of revenue-generation on it."