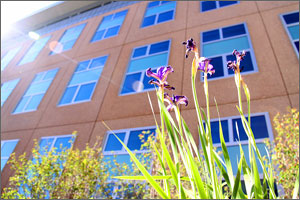 Newly planted irises reach for the sun in the courtyard of the new Research Support Facility located on the NREL campus. NREL is part of a team helping to develop a national rating system for landscaping projects.
Credit: Heather Lammers

Hitting rocky soil while digging for a new building wouldn't cause many contractors to think twice. The rocks would be hauled to a landfill and forgotten. But, when you are excavating for one of the world's greenest buildings, rocks suddenly become a resource. And, clever landscape designers turn that resource into gabion walls as part of an overall landscaping plan that is as environmentally friendly as the building itself. In fact, the landscaping for the U.S. Department of Energy's (DOE) Research Support Facility (RSF) located on the NREL campus already has been selected to help shape a rating system that will be the nation's first for green landscape design, construction and maintenance.

Rock Walls — a Cornerstone for Landscaping

Gabion walls — essentially wire cages filled with rocks — were developed in the Middle Ages, and in modern times are used to provide landscape retention without the use of mined or quarried stone. By using onsite material, such as the rocks found at the RSF site, the walls greatly reduce the need for other materials and eliminate transportation costs and associated fuel consumption. 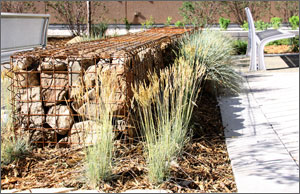 Gabion walls are a sustainable alternative to concrete retaining walls since they use rock excavated during construction.
Credit: Heather Lammers

"Gabion walls provided the foundation for starting our landscaping," NREL Director of Sustainability Frank Rukavina said. "We were able to mix really nice landscaping features with the walls and used a lot less energy than if we'd used a high-energy material like concrete."

"We looked for a retaining wall solution that would use the on-site materials," Brian Nicholson, landscape designer for RNL, added. "Gabions are used in the Southwest, so we found a company that makes the wire baskets from 100 percent recycled steel. We ended up harvesting 1,000 cubic yards of rock that would have normally been headed to the landfill and putting it to use as retaining walls."

As with the RSF building, the use of recycled materials also is found throughout the landscaping plan. Recycled concrete is used as road base and as a drainage layer under the parking lot, sidewalks, and pavers. Recycled concrete building material is used as the decorative rock skirt surrounding the RSF. The wood mulch is composed of tree trimmings, paint-free lumber and residential yard waste. Recycled glass is used in the storm water catch basins as to slow flow. 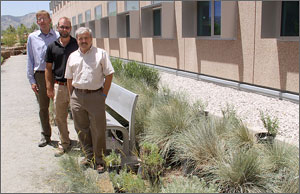 "Water flows off the roof, into the downspout and then into catch basins lined with crushed glass." Nicholson said. "The water running through those troughs waters the trees and plants as it goes. In Colorado we can't capture water, but we can use it as it flows through the site."

Stormwater provides supplemental water to the RSF vegetation, but it can't be the only source of water for plants blossoming during Colorado's dry summers.

"Because we are in an arid climate, we have to look at using water as a resource," Nicholson said. "We looked at what we could do to slow down the water on the site and then we wanted to find the most water-efficient irrigation system possible."

The team found an irrigation controller that collects data from weather stations in the region. Using that data, the controller calculates how much water loss there has been from sun and wind and then the controller figures out how much supplemental watering is needed. By using this type of "smart" controller, the landscape team believes a 30 percent reduction in water use can be achieved.

As the design works down to the plants, trees, and shrubs; Colorado native and adaptive plants are being tapped to provide color and texture to the outside spaces at RSF. The NREL plant palette provides food and habitat for local wildlife while eliminating the need for mowing and applying chemicals such as pesticides and herbicides. The use of native species also promotes biodiversity on the NREL campus.

The plants are zoned according to climate, which means a different plant palette is used on the north versus the south side of the building. Native prairies grasses and rabbit brush are being used to transition the native plants found on the surrounding mesa to the adaptive plants used in RSF courtyards.

"We wanted to also provide a sensory experience with lavender, Russian sage and other flowering perennials, including roses, all of which are very close to the native plants," Nicholson said. 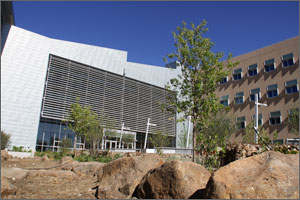 The main entrance to the new RSF features a sustainable landscaping design that uses recycled materials and is to helping shape a rating system that will be the nation's first for green landscape design, construction and maintenance.
Credit: Heather Lammers

The RSF was selected as one of 150 other projects from 34 states as part of an international pilot project to evaluate the new Sustainable Sites Initiative (SITES), a rating system for sustainable landscaping.

SITES is a partnership between the American Society of Landscape Architects (ASLA), the Lady Bird Johnson Wildflower Center at The University of Texas at Austin, and the United States Botanic Garden. "One area we will be judged on is our ability to cut back on the average water use for landscaping in this area of the country," Rukavina said. "It will be an exciting challenge to be part of the newly formed program."

RSF joins other projects that include academic and corporate campuses, public parks with hundreds of acres, transportation corridors and private residences of less than one acre. SITES will use feedback from this and the other selected projects during the pilot phase to revise the final rating system and reference guide by early 2013. The U.S. Green Building Council plans to incorporate the guidelines and performance benchmarks into future versions of its LEED Green Building Rating System.

"We are really looking forward to helping shape the SITES rating system and provide feedback on our design, which centers around a net-zero energy building and helps to reinforce what's going on inside the RSF," Nicholson said.

Haselden Construction and RNL built the 222,000 square-foot Research Support Facility building, which is designed to be a model for sustainable, high-performance building design, and provides DOE-owned work space for administrative staff who currently occupy leased space in the nearby Denver West Office Park. The RSF was designed by RNL. Stantec Consulting served as the project's engineering consultant. More information on SITES is available at www.sustainablesites.org.