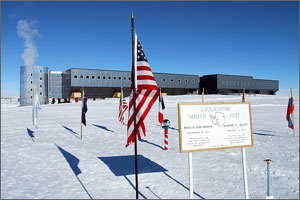 NREL researchers are experimenting with adding wind and photovoltaic solar energy systems at the Amundsen-Scott Research Station at the South Pole. The new station originally was supposed to include renewable energy systems, but construction delays and other factors cut them from the project.
Courtesy of NSF

While the Eastern Seaboard sears under triple-digit temperatures, clean energy systems certified by the U.S. Department of Energy's National Renewable Energy Laboratory are supplying ice-bound research bases at the bottom of the world with critical power during the frigid darkness of the Antarctic winter.

Later this year, other systems being tested by the NREL engineering team are expected to generate power during the endlessly bright polar summer months.

The combined results, along with energy conservation measures, will contribute to new renewable energy and energy-efficient construction standards in Antarctica and other remote locations, where both environmental protection and reliable energy supplies are critical to the success of scientific missions.

The projects also will serve as distant, but powerful reminders that if renewable energy systems can succeed in ferocious conditions, they should have widespread application in more temperate locations.

"There is no design standard for minus-100 degrees F," said NREL senior mechanical engineer Ian Baring-Gould, who leads the Laboratory's work in polar environments. "If wind and solar energy systems can work in Antarctica, then certainly they should work in places like Kansas."

NREL and NSF: a Natural Partnership 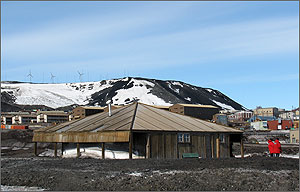 NRL researchers have certified a new wind farm to generate clean electricity for McMurdo Research Station and New Zealand's Scott Base. The three wind turbines can be seen at the crest of the hill overlooking dormitories and other buildings at McMurdo.
Credit: NREL/Ian Baring-Gould

Remote polar stations operated by the National Science Foundation offer NREL a natural opportunity to extend both the reach of renewable energy and the Laboratory's expertise.

But because the environment is so uniquely and unrelentingly hostile, and help is so far away — New Zealand is a 5-7 hour flight when conditions allow — any energy system used there must be extremely reliable and relatively simple to repair.

Even the systems' constituent materials must be tested. That's because typical metals and plastics can become brittle in extreme cold.

"The conditions in Antarctica leave no margin for error," said Baring-Gould, who works in the Laboratory's National Wind Technology Center and Deployment and Industry Partnerships Group. "NSF needs to know everything it can both about the system and the natural resources that we're harnessing for energy."

Then there is the issue of energy cost.

Antarctica's research stations rely primarily on diesel fuel for heat, lights, and transportation. Every year, NSF ships huge volumes of fuel to locations so remote and barren than NASA uses them as simulators for Mars.

"At those prices, you have to manage your energy very carefully," Baring-Gould said. "Every gallon of fuel you can displace with renewable energy makes a real difference to the program budget." 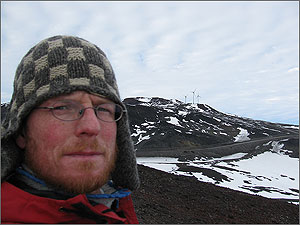 The most extensive use of renewable energy in Antarctica is at McMurdo Station, the primary hub for U.S. science operations on the continent. The station's population swells to more than 1,000 residents during the polar summer. Energy demands continue around the clock as scientists squeeze years' worth of research into a few months of continuously available sunlight.

McMurdo now shares a 1 megawatt wind farm with nearby Scott Base, which is operated by New Zealand. The new wind farm is between the outposts on Ross Island's Crater Hill.

While it is not Antarctica's first permanent wind farm — Australia's Mawson Station installed two turbines on the continent in 2003 — it is the southernmost wind farm in the world and the largest installation in Antarctica.

Baring-Gould and NREL's Owen Roberts commissioned the new wind farm in January. It includes three Enercon E33 turbines installed by New Zealand's state-owned Meridian Energy. They were built on specially-designed pads that had to be shipped to the site in sections. That's because Antarctica has no concrete manufacturing facilities or sources of fresh water or aggregate.

The system includes a flywheel that can supply power for 30 seconds to maintain the system's stability in case of sudden wind changes while improving general power quality overall.

And, a special electrical grid of ground-laid cables had to be installed between the bases and the wind farm, as well as a static frequency converter, because power at McMurdo operates at 60Hz while the New Zealand base operates at 50Hz.

The wind farm is expected to meet at least 20 percent of the electricity needs of both bases and cut diesel consumption by at least 125,000 gallons per year. It will reduce carbon dioxide emissions by an estimated 1,242 tons per year as well.

"During a recent high-wind event, the power system demonstrated that more than 70 percent of McMurdo's energy needs could be provided by wind with the existing system configuration," Baring-Gould said. "But we need to make sure that the system works with diesel generation so there is no interruption of power or instability."

NSF also is testing electric vehicles in McMurdo, to reduce fuel needs and pollution from the base's extensive fleet of diesel trucks, snow mobiles and buses.

For fiscal year 2011, NSF is requesting $3 million to fund wind and solar energy upgrades at the nearby Black Island telecommunications relay facility that serves McMurdo. The agency also is seeking $2 million to support new smart grid metering and networked direct digital controls to monitor and manage McMurdo's power, lighting, heating, and water use.

"We have already realized over a million gallons of fuel savings annually," Colston said "Together, our two organizations have advanced the United States' environmental stewardship in Antarctica." 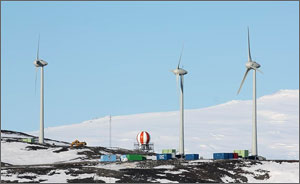 The NREL team also is testing renewable energy technologies at the Amundsen-Scott South Pole Station, but the scale of the renewable energy systems there is experimental. That's because the Pole represents a significantly more difficult challenge.

While McMurdo is on the coast with relatively warmer temperatures and even some bare ground, the Pole station is 800 miles inland and rests at an elevation of 10,000 feet atop an ice cap nearly two miles thick.

In summer, the high temperature typically stalls at minus 20 degrees F.

In 2008, NSF dedicated a new $153 million elevated polar station to replace the iconic, but obsolete, geodesic dome station. The new station was designed with integrated photovoltaics (PV) on its roof, but during its extended construction the PV system was eliminated by budget constraints and project delays. Today the new station is served by diesel power; fuel tanks are located in ice caverns below the station.

Adding PV to the station's roof now would be prohibitively expensive, Baring-Gould said. And, engineers would have to drill through the station's high-tech cocoon of insulation, exposing occupants to potentially catastrophic leaks.

Instead, NREL is focusing on property a few hundred yards away nicknamed Summer Camp. Rows of Quonset huts shelter the overflow of researchers and maintenance workers during the polar summer. Because the sun never sets during the polar summer, PV could generate power around the clock for the small huts, as well as nearby toilets, laundries and other facilities.

The NREL Buildings Group has performed computer modeling of energy-efficient designs for a new generation of Summer Camp dormitories, which could be started in 2012. PV panels would be integrated into the roofs of these new huts, along with passive solar heating systems.

The Lab team in collaboration with staff from Raytheon Polar Services, the operating contractor for all NSF operations in Antarctica, already is conducting field tests with small installations — six PV modules and a small 2.3 kW wind turbine. Testing of solar thermal technology will start next year. The wind turbine tests will continue for at least one more year, while the PV panels will capture at least two years of seasonal data.

The combination of technologies appears favorable. Like many places, generating large amounts of renewable power in Antarctica with a single technology is unlikely. Fortunately, polar winds blow during the winter months when the sun does not shine.

"Right now we're testing so we can really understand the energy protocols of the site," Baring Gould said. "It looks promising because the two renewable resources — solar and wind — coincide with the change of seasons. And when the power demand is high during the summer, you'd have solar 24-7."

But remember, this is Antarctica, where the unexpected happens and people's survival can be measured in a few hours — or minutes — without power.

"That's why," Baring-Gould said, "you have to put a unit out there, record the data and see how it works."