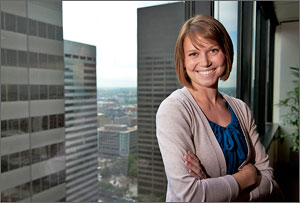 Columbine. It's not often a single word can evoke an enormous spectrum of emotions. But for many, saying that simple word brings back memories of a fateful day — Tuesday, April 20, 1999 – when two high school seniors killed 12 students and one teacher. The gunmen also injured 24 others in one of the worst high school shootings in American history.

Like many across the country watching the events unfold, employees at the U.S. Department of Energy's National Renewable Energy Laboratory (NREL) were determined to do something to help. Employees submitted many ideas ranging from giving financial assistance to the victims, to contributing to a memorial site, to investing in the students' futures by creating a scholarship fund.

The scholarship idea was chosen as the best way NREL could honor the victims. With the assistance of the Lab's managing partners — Midwest Research Institute, Battelle and Bechtel Corporation —$35,000 was contributed to Colorado School of Mines to endow the NREL Columbine Spirit Scholarship.

Richard H. Truly, former NREL director, said at the time, "The Columbine tragedy struck me and NREL's employees deeply. We all wanted to do something that would honor the young victims while providing hope for the future, and our future as a community."

Going Places is Just Part of the Job 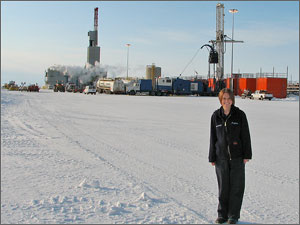 Life since Columbine has taken Meghan McKee from Colorado to the icy North Slope of Alaska where she worked as a drill site facility engineer.
Courtesy of Meghan McKee

Columbine Spirit Scholarship recipient Meghan McKee was a freshman at Columbine High School in the spring of 1999, so she was also a member of the last class to graduate after experiencing the tragic events of April 20. "It's different every year how April impacts me," McKee said. "I think I matured quickly, learned to value relationships and the way I treat people."

Relationships have been a key to her success since graduating from Colorado School of Mines with a degree in mechanical engineering. Her professional path has taken her from Colorado to the icy North Slope of Alaska and back.

Shortly before graduating from Mines, McKee accepted a job with ConocoPhillips in Anchorage, Alaska. Her first year was a hands-on introduction to the oil and gas industry during which she rotated into a new position every four months. After a year of learning the ropes, she accepted a job on the North Slope of Alaska at Kuparuk field. Discovered in the late 1960s, Kuparuk boasts one of the largest oil reserves in North America. During long summer days and even longer winter nights, McKee worked two weeks on and then two weeks off as a Drill Site Facility Engineer.

"Oil and gas facilities was what I migrated to because of my mechanical background," McKee said. "You deal with the pumps, compressors, the pipelines — so it was along the lines of what I studied."

Life on the oil fields of Alaska is typically thought of as a man's world, but McKee had no trouble forming relationships and learning from her colleagues.

"After sitting in the lecture hall and you are one of three females, it didn't really strike me as all that different," she said. "It was fun; the guys were top-notch field operators. Some had college degrees and others worked their way up, but they were all really experienced and they taught me a lot."

After her two years in Alaska, McKee returned to Colorado to work for El Paso Exploration & Production as a facility engineer. "I heard a lot about working for independents so I thought it could be fun. Typically in an independent company, you get to see a lot more of the process and you have your hands on a lot more projects." 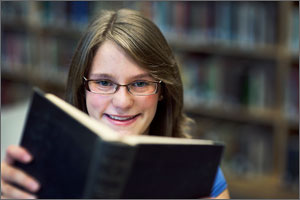 Recent Columbine grad and Mines sophomore Rebecca Silverstein is working toward a degree in bio-chemical engineering — thanks, in part, to a scholarship established by NREL.
Credit: Dennis Schroeder

Working for El Paso means splitting her time between the company's Denver office and a natural gas field outside Raton, NM. Although her experience has been with oil and natural gas, solar may help provide a portion of the power for the work she does outside Raton in the near future.

Working the natural gas field has provided McKee with yet another unique experience since graduation. "You can drive through the ranch and not see a great deal of visual impact," McKee said. "We've positioned wells behind trees, so the wilderness aspect is still very much there."

After traveling from the frozen wilds of Alaska to the New Mexico wilderness, McKee encourages future scholarship students to "always keep an open mind."

"There were days on the North Slope of Alaska when I thought, 'How did I get here?'" McKee said. "When I look back, it was just awesome. But, it was also a challenge as a young female in the field. You aren't going to like what you do all of the time. You just have to push through and you might realize later that it was one of the best experiences you've ever had and you learned more than you ever thought."

The NREL Columbine Spirit Scholarship is still helping students not directly impacted by the events of April 1999. Rebecca Silverstein is a recent Columbine graduate in the beginning stages of her college career.

"It's a lot of work being at Mines but I'm a hard worker and I like to stay busy," said Silverstein.

She is currently majoring in bio-chemical engineering and hoping to find work in the medical field researching new technologies. However, like most students in a tough economy, she is keeping her options open. "What I do will also depend on where I can get a job once I graduate, so I'm not ruling anything out at this point," Silverstein said.

The rough job market means that she will be spending the summer before her sophomore year volunteering and helping her father's company research ways that renewable energy can be used on brownfield sites.

Whether her summer research project will steer her towards renewables remains to be seen. She is, however, certain about the investment she's making in her future, with NREL's help. With no hesitation she said, "I'm really excited to be able to graduate and go into industry and start making a difference. "

Learn more about the Columbine Memorial, Colorado School of Mines and NREL's commitment to education[BROKEN LINK].