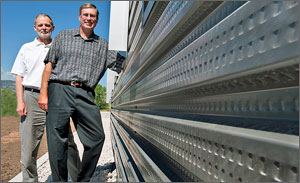 NREL's Craig Christensen and Chuck Kutscher stand next to a wall at the RSF that uses their award-winning transpired air collector technology.
Credit: Dennis Schroeder

Sometimes the way back home isn't straightforward. But once you find your way, you know you'll be welcomed with open arms. Transpired solar air collector technology

, developed at the U.S. Department of Energy's National Renewable Energy Laboratory (NREL) in the 1990s, recently "found its way home" and is now an integral part of the comfort heating system of the new Research Support Facility (RSF).

"The solar collector is really important to the building." Philip Macey, RSF project manager for Haselden Construction, said. "It's the way we get free pre-heated warmed air."

Commercial and industrial buildings in the U.S. have a specific need when it comes to ventilation systems and heating. Although having fresh air inside a building always is desirable, drawing fresh air into a building on a crisp winter day can mean huge amounts of energy is required to heat that air to make it feel comfortable. In fact, 13 percent of the energy used in the U.S. goes to heating residential and commercial buildings. 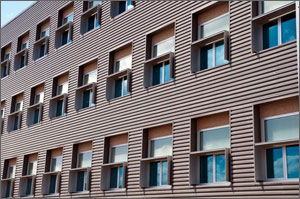 Much of the south-facing wall at the RSF employs passive heating technology developed at NREL. Highly efficient, these collectors can capture up to 80 percent of the energy of the sunlight striking the collector.
Credit: Pat Corkery

By using a dark-colored, perforated metal plate on the south side of a building, three NREL scientists have perfected a way for buildings to pre-heat the air coming in, reducing the need for additional heating energy.

The basic concept of a transpired solar air collector is for the perforated plate to be warmed by the sunlight hitting the south side of a building. A fan added to the building's existing ventilation system slowly draws warmed ventilation air into the building through the plate. The solar energy absorbed by the dark plate is transferred to the air flowing through it. This process can efficiently preheat the air going into a building like the RSF by as much as 40 degrees F.

"We knew we needed to create pre-warmed air for the RSF and we found a product and kind of had to chuckle when we realized this was going to be perfect — the technology was made by NREL," Macey said. "That's one of those moments when you realized you are obviously going in the right direction when things line up like this."

"These tend to be very efficient solar collectors," Chuck Kutscher, principal engineer and group manager of the Thermal Systems Group, said. "These collectors can get 75 to 80 percent of the energy of the sunlight striking the collector absorbed into the ventilation air." Kutscher was one of the researchers who originally worked on the transpired solar collector for NREL. His research was the subject of his Ph.D. thesis and also provided thesis work for NREL's Craig Christensen and former employee Keith Gawlik.

The developments that NREL brought to this technology were so exciting that the transpired solar collector was recognized by Popular Science and Research and Development magazines as one of the most innovative technology developments of the year.

"Researching the transpired solar collector was a really fun project for us for a couple of reasons," Kutscher said. "We did a wide breadth of research, we covered a lot of different areas, and it was a much more comprehensive study of the technology than we would typically do. It was a totally new concept and we had to develop new equations to understand how it would work. Yet it is a simple and elegant technology that is inexpensive and highly efficient."

Not the First Solar Collector at NREL 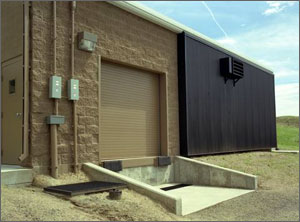 NREL's Waste Handling Facility actually has the distinction of having the first transpired solar collector to be located on the NREL campus.
Credit: Warren Gretz

"We were gratified to find out the transpired solar collector would be used on the RSF," Kutscher said. "But it's actually the second to be installed at NREL."

In the 1990s, NREL placed a transpired solar collector on its waste handling facility. Because the facility stores waste chemicals, it uses expensive electric resistance heating and requires a large amount of ventilation.

"The Waste Handling Facility was an ideal application," Kutscher said. "We put instruments on that wall, and then studied and reported the results as part of an International Energy Agency task. So it's the second collector at NREL, but the first one to be on an office building."

Haselden Construction and RNL built the 222,000 square-foot Research Support Facility building, which is designed to be a model for sustainable, high-performance building design, and provides DOE-owned work space for administrative staff occupying leased space in the nearby Denver West Office Park. The RSF was designed by RNL. Stantec Consulting served as the project's engineering consultant.