IKEA Geothermal System Could Inform Others 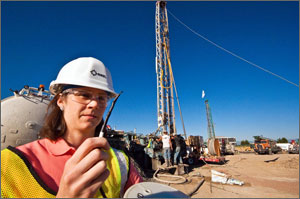 NREL senior geothermal analyst Erin Anderson examines a heat sensor to make sure it's in working order before the wire attached to the sensor descends 500 feet under the IKEA store construction site in Centennial, Colo.
Credit: Pat Corkery

It will take less energy and money to make the IKEA store opening next year in suburban Denver feel pleasant when the sun bakes or when the snow drifts, thanks to 130 holes dug into the Earth, where the temperature remains about 55 degrees all year round.

IKEA, the Swedish home furnishings retailer, has teamed with the U.S. Department of Energy's National Renewable Energy Laboratory to showcase and study the advantages of a geothermal heating system currently under construction in Centennial, Colo.

It will be the first IKEA store in the United States to be built with geothermal heating and cooling, said Douglas Wolfe, IKEA project construction manager for the store expected to open south of Denver in the fall of 2011.

The holes, each 500 feet deep, will be directly below the parking garage that will be just below the store.

Data Could Lead to Better Models

The IKEA/NREL project could be the benchmark for a credible standard for geothermal installation in large-scale retail stores nationwide. NREL's data base will be open to researchers around the world to use for their models, Erin Anderson, a senior geothermal analyst at NREL, said.

"We're trying to collect data on how it actually performs," which could prove invaluable to future projects. "By collecting actual live data on the performance of systems, you have better insight on what needs to be improved.

"We'll be able to say with confidence, 'if you do it this way, it will work this well.'"

The sun could be frying eggs on sidewalks, or the bitter cold could be freezing tongues to flagpoles, but a few feet underground the temperature generally is moderate and pleasant, summer or winter.

This is because of thermal inertia, the propensity for soil to heat up or cool down much slower than air or water.

The trick is to run a liquid in a loop down to that pleasant temperature and bring it back up to help keep things cool in the summer and warm in the winter. When warm air at the surface is passed over the cool pipes, the air gets cooler. When the air is cooler than the liquid, it is warmed as it passes over the pipes.

At the site of the Colorado IKEA store there are several tracts of dirt at different levels, bulldozed flat; some trenches holding pipe; several earth-movers and a tall drilling rig boring those 500-foot holes.

A counterweight attached to the rig helps drive hose loops through the mud, down the 5 ½-inch diameter holes.

Anderson was at the site recently to take measurements. She sends a sensor attached to hundreds of feet of wire down one of the three holes to be tested. "We're monitoring three points in each hole," Anderson said, "at the very bottom, and at 250 feet on either side of the pipe.

"Imagine two straws," she said. "The fluid is flowing through them, descending down one, rising up the other. We want to see if the supply temperature and the return temperature are different.

As the fluid rises to the surface a heat pump compresses the air, increasing the pressure.

"It's the same way your refrigerator works," with a compressor to extract the heat, Anderson said. "You put a hot chicken in the fridge, and three hours later it's cool. But the back of the fridge is hot. The refrigerator is taking the hot from the food and rejecting it to the outside."

"We have a much larger cooling load than we do a heating load," Wolfe said. "Believe it or not, even in the dead of winter we will be cooling on some days more than heating just because of the number of people who will be in the store. All those customers and co-workers generate a lot of heat — that, along with all the lighting, the heat generated by the restaurant and other equipment throughout the building — increases the cooling load," Wolfe said.

In fact, even with 130 holes 500 feet deep and a maze of hose below the building carrying all that cool-but-not-cold water, the store is going to need an extra chiller. An ice-storage system will provide additional cooling during the warmest days of summer.

A concrete driveway on the north side of the store will be another good place to reject heat, Anderson said. "They're taking warm air from the building and rejecting it to the outside to help melt ice on the parking lot during inclement winter days.

The drillers hired by IKEA are making 5 ½-inch diameter holes and going down 500 feet. Why?

The cost of digging 130 holes 500 feet deep and filling them with loops of pipe will be paid back in energy savings within a reasonable time, Wolfe said. "And we expect the system to last as long as the building lasts.

"We looked at soil conditions and thermal conductivity tests to determine how many wells we would need and at what depth they would have to be," Wolfe said. The numbers bore out. "This approach is consistent with our commitment to using sustainable building practices whenever feasible."

The drillers are encountering "a lot of shale, some layers of sandstone, a lot of sand," said Matt Lungerich, drill crew leader for Rocky Mountain GeoDrill of Centennial. "Here and there we hit some gravel, usually at the top." The end result is a huge pile of grayish rock, from baseball-size to mere dust, which is hauled away by a front-loader.

It usually takes about four or five hours to drill a 500-foot hole, but if they encounter some difficult rock or if the rig breaks down, one hole can take all day.

"We launched an internal energy-efficiency initiative several years back that included evaluation of geothermal programs for construction of new stores," Wolfe said. "We looked at doing geothermal at a couple of other U.S. projects in the past, but this is the first project where the timing, the economics and the geotechnical aspects all make sense."

The geothermal heating and cooling system "is something that globally IKEA has been considering for a number of years," Wolfe added. "We're very excited about working with NREL. The partnership has turned out to be very beneficial for both of us. It is providing both of us with useful information about operating such programs." Seeing the information in real time "will allow us to determine and manage the efficiency of the geothermal system in Centennial" as well as planning for "future operations at this location as well as at other IKEA stores."

When Anderson heard that IKEA planned to drill holes and install pumps for geothermal energy, she didn't hesitate. "We've been interested in monitoring commercial sites," she said. "I got in touch with the designer and asked if they wanted to be a part of this monitoring system.

"Geothermal is a technology that has been around forever," Anderson said. There is evidence that Stone Age people tapped the Earth to keep their caves and hovels warmer in winter, cooler in summer.

"It works when it's designed correctly and installed correctly," Anderson said.