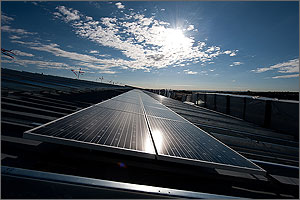 More than 1,800 solar panels are being installed on the roof of the RSF to help the building generate as much electricity as it uses.
Credit: Dennis Schroeder

When a new office building is constructed on the campus of the U.S. Department of Energy's National Renewable Energy Laboratory, it only makes sense that much of its energy should come from solar power.

The Research Support Facility (RSF) embodies the ideals of energy efficiency, renewable energy and sustainability that have been advocated by NREL researchers for more than 30 years. While the RSF adds 222,000 square feet of office space to the NREL campus, the building's energy use only increases NREL's overall consumption by 6 percent. It's this remarkable achievement in ultra energy efficiency and the use of renewable energy that makes the building a shining example of NREL's mission and desire to "walk the talk."

That's a Lot of PV

To help the RSF achieve its goal to produce as much energy on-site as it uses, a 1.6 megawatt (MW) photovoltaic (PV) system is being installed on the NREL campus. The roof system comprises more than 1,800 panels soaking in 240 watts each of the Colorado sun. But the roof alone doesn't zero out the energy equation. Additional PV will be installed on the RSF expansion (currently under construction) and on a nearby garage and parking lot.

The PV panels glistening on the roof are the "icing" on many other layers of energy efficiency and sustainable technologies that already make the RSF a model for super energy efficient office buildings. It's these layers — the siting of the building on the land, day lighting in office spaces, energy efficient work stations, and use of recycled materials — that also make the building a candidate for the U.S. Green Building Council's Leadership in Energy and Environmental Design (LEED) Platinum Certification.

Installing 1.6 MW of PV factors into the overall cost of the building and could have affected the other energy saving features at the RSF. To mitigate that up-front cost, DOE turned to a conventional option — the Power Purchase Agreement (PPA). 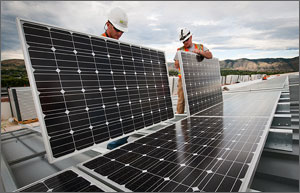 "Third party financing agreements, such as a PPA, are a popular way to infuse renewable energy generating products into the marketplace without requiring the owner to absorb the system's first costs," said Randy Dins, Federal Project Director for DOE's Golden Office.

Through a competitive selection, DOE and NREL partnered with Sun Edison and successfully responded to a Request for Proposal under Xcel Energy's Solar Rewards Program. Xcel Energy is required by the State of Colorado to generate a certain percentage of power from renewables. The utility was looking for new renewable energy installations from which the renewable energy credits (RECs) could be purchased and that made a PPA a win-win solution for everyone.

Under the PPA, Sun Edison finances the first cost of the RSF PV system. Then Sun Edison sells the RECs generated from the system to Xcel Energy. This investment also generates a monthly revenue stream from DOE to Sun Edison based on a formula of kilowatts per hour generated; the agreement lasts for 20 years. Dins added, "It's the confluence of these two revenue streams that makes the business case palatable for Sun Edison and its investors."

"It's a win for DOE and NREL because the federal government does not incur the upfront costs of purchasing the PV system," Dins said. "We can accurately budget for a fixed price for solar electricity for a fixed period of time."

The PV system is constructed, owned and serviced by Sun Edison, but NREL has the opportunity to purchase the system at the end of the agreement.

Sustainable Before It Was 'Cool' 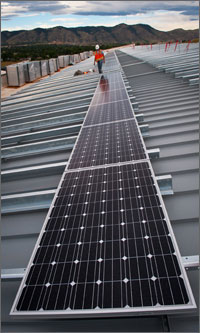 Although NREL's sustainability program is more than a decade old, a new executive order is encouraging all Federal facilities to go green.
Credit: Dennis Schroeder

A financial boon to the taxpayers, and NREL's desire to showcase sustainability are just a couple of reasons that PV is being used to generate power for the RSF. A third motivator is Executive Order 13514, "Federal Leadership in Environmental, Energy, and Economic Performance

, from the President of the United States to all Federal agencies.

"The new executive order is often referred to as the sustainability order," said NREL Director of Sustainability Frank Rukavina. "It expands energy reduction and environmental performance requirements for Federal agencies so that they will take the lead in creating a clean energy economy."

NREL's sustainability program has been in place for more than a decade. "To borrow from country music vernacular, NREL was sustainable before sustainability was cool," added Rukavina.

What is new to the Sustainable NREL Program is that the team is currently developing goals for GHG emissions for 2020. "Putting PV on the RSF helps NREL meet our green house goals by reducing the amount of power that must be bought from the local utility and by lowering our transmission and distribution reporting requirements," Rukavina said.

He also noted that by the time that the RSF expansion is complete along with the garage and parking lot, NREL will be producing 32 percent of all of its energy for the entire South Table Mountain Campus (not just the RSF) from PV.

Haselden Construction and RNL built the 222,000 square-foot Research Support Facility building, which is designed to be a model for sustainable, high-performance building design, and provides DOE-owned workspace for administrative staff occupying leased space in the nearby Denver West Office Park. The RSF was designed by RNL. Stantec Consulting served as the project's engineering consultant.