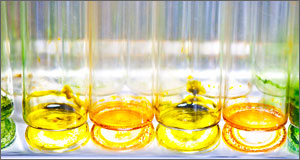 These test tubes in an NREL algae lab hold a selection of lipids, or oils, that have been extracted from several algal strains. The tubes illustrate the colorful variety of work being done at NREL under a new aquatic species program.
Credit: Dennis Schroeder

In a test tube, vibrant green microalgae look fragile, but in reality getting them to spill their lipid secrets to make renewable fuels is a challenge — one that researchers at the U.S. Department of Energy's (DOE) National Renewable Energy Laboratory are tackling, again.

From 1978 to 1996, DOE funded NREL's study of microalgae under the Aquatic Species Program. During that time, 3,000 algae strains were isolated from various aquatic habitats. Roughly 50 caught the attention of researchers for their potential use in producing transportation fuels.

Then in 1996, the price of oil bottomed out at roughly $20 a barrel. The estimated cost of algae oil at the time was about $80 a barrel. With those price factors and other budget pressures, DOE stopped funding the Aquatic Species Program. Algae strains were sent to the University of Hawaii for safekeeping and the NREL team summarized nearly 20 years of research in the program's Close Out Report.

Algae Comes Back into the Race

Fast forward 10 years and the Energy Independence and Security Act of 2007 (EISA) is passed by Congress. The 2007 law required that the U.S. produce and use 36 billion gallons of renewable fuels by 2022. EISA capped the use of starch based ethanol at 15 billion gallons and called for the remainder to be made up by "advanced biofuels"— basically anything else.

Because of its past research, NREL was ahead of the curve. In 2006 an NREL research team began seeking new funding for algae research. "We started another aquatic species program but it is really quite different from the first," said NREL Principal Group Manager Al Darzins. "And we have surpassed the old aquatic species program in terms of funding."

In a few short years, the team raised more than $8 million. One of the goals was to diversify program funding said Darzins. DOE is again in the mix, but so is the Department of Defense (for work with the U.S. Air Force Office of Scientific Research) and companies like Chevron with whom NREL has Cooperative Research and Development Agreements.

NREL used some funding to retrace work in the old program by bio-prospecting for new strains, but thanks to new technology, the work goes a lot faster.

"We've accumulated almost 400 different algal strains from differing environments — freshwater, brackish and saline," Darzins said. "Today we have higher throughput devices that allow us to process samples very quickly. Think about it like using tweezers — although it's a little more complicated than that. We can actually sort and pick out, at will, individual algae from the water sample and get a pure culture of a single strain of algae." 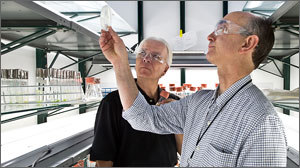 Once samples are collected, NREL is focused on understanding the biology of the organisms. "If you don't understand the biology and how to grow them, how are you ever going to grow them at a large scale and control them?" Darzins said.

NREL chose a strain of the algal species, Chlorella vulgaris, as its model organism. Researchers are trying to get a complete view of its molecular biology and biochemistry. In their opinion, it's a good study subject because it grows quickly and makes a lot of oil.

But, one of the hard parts of dealing with algae is getting the oil out of the cells — this is especially true with Chlorella vulgaris. "We typically use some sort of solvent — but even that's not so easy and the cell wall can resist it," Principal Research Supervisor Phil Pienkos said. "NREL is working to find enzymes that can help degrade the cell wall of algae and allow the solvents access so we can more efficiently extract the oil."

According to Pienkos, if an enzyme is found that can easily break down the cell wall, it might be possible to isolate the gene for that enzyme and engineer the algae to produce that enzyme just before it is ready to harvest.

"If you could induce the enzymes so that the cells become weakened on their own then it's possible that the cell could survive and you could separate out the oil and return the cells into cultivation," Pienkos said. "That would be a real cost savings."

"NREL is looking at the metabolic engineering of algae but only to find out the fundamentals of how these organisms tick," Darzins added. "We are not growing genetically modified organisms outside the lab. By using them only in the controlled laboratory setting, we think it will tell us quite a bit."

To accelerate the deployment of advanced biofuels, President Obama and Secretary of Energy Steven Chu announced the investment of $800 million in new research on biofuels in the American Recovery and Renewal Act. The announcement included funds for research, development and deployment of commercial algae-to-biofuels processes. Algenol was awarded $25 million to pilot a photo-bioreactor algal biofuel system — and NREL is working with this company to help them accelerate commercial production.

"They have a unique technology using algae to convert carbon dioxide (CO2) directly to ethanol," Pienkos said. "Their photo bioreactor system allows them to continuously produce ethanol so they don't have to harvest algae."

NREL is working with Algenol on two fronts — a techno economic and lifecycle analysis of their production facility and evaluation of the algae for sensitivity to components in the flue gases used to feed the algae.

"When most people do their small-scale work they tend to use air mixed with pure CO2," said Pienkos. "When they scale-up they have to think about using an industrial source of CO2, which is made up of different components. No one is sure if flue gas will have a long-term impact on algae production." 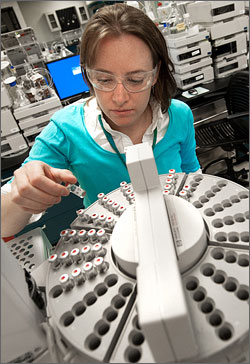 Whether a company is striving to make ethanol, green diesel or even jet fuel from algae, the key will be isolating the right algae from the pool of thousands, if not hundreds of thousands of available strains in the environment. Sorting through water samples looking for the right candidate for a project consumes lots of money. NREL is solving that problem by using infrared light to sort out the best oil-producing algae.

"The traditional method to measure the oil content of algal biomass is very cumbersome," Researcher Lieve Laurens said. "It takes a long time — up to two days – and it uses lots of chemicals. We are using near infrared spectroscopy to determine the oil content in the algae in a matter of minutes."

The process works by shining a broad spectrum light, with wavelengths ranging from the visible to the infrared region of the spectrum, at the sample. Several different detectors measure how much light is reflected versus how much was absorbed by the sample. According to Laurens, different molecules in the algal biomass will have different absorption peaks showing a "fingerprint" for the algae. That fingerprint, along with a mathematical model, is then used to estimate the oil content of that particular strain of algae.

The technique is non-destructive to the cell and, at this point, seems to be species agnostic. "In this case, we can scan the biomass and then continue doing something else with it," Laurens said. This technique has researchers pondering other possible applications. "For example, we could use this technique to screen a large number of algal strains in a culture collection in the search for high oil producers without having to measure the oil content using traditional methods."

Other plans are to apply these infrared methods to growing cultures to see if researchers can do real-time monitoring and determine when a culture is ready to be harvested. In addition, there is an application for crop protection.

"In an outside open-pond system, it is likely that other algae will land in the pond and try to out-compete your species so this technique could be handy for monitoring the health of your crop," Laurens said.

What Do You Make with Leftovers?

Once an algal strain is selected, cultivated and the oils are finally harvested, there are leftovers which are referred to as residual biomass. The other question NREL researchers are tackling is what to do with the leftovers. Could they be used to make ethanol or biogas?

To make algae conversion a "two-fuels-for-the price of one" winner, scientists have to understand what makes up the algae biomass. The team is bringing NREL's extensive knowledge in compositional analysis of biomass to the table. "The expertise in the compositional analysis group is a huge knowledge base so we don't have to start completely from scratch when it comes to algae," Laurens said. "There are certain methods we can use and there are some things that will be unique and require some creative solutions. For instance, the carbohydrates in algae are very different compared with those found in biomass like corn stover."

No matter the many new challenges NREL researchers face when it comes to using algae for any variety transportation fuels, the work could really pay off in the end.

"Algae has a lot of potential, and NREL has been doing a good job of not subscribing to all of the hype," Darzins said. "We have been a credible advisor to DOE, industry and the general research community. Our message has been that for algal biofuels the potential is huge — it could be a game changer. But, the challenges are equally as daunting — and boy, have we got our work cut out for us."