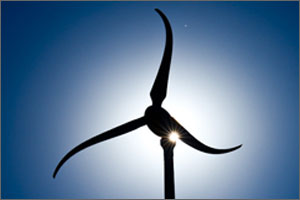 Blades of a Southwest Windpower Skystream turbine are silhouetted by the sun at NREL's National Wind Technology Center. Forty-two of the turbines are spinning at schools in 11 states as part of the Wind for Schools project.
Credit: Dennis Schroeder

They're about 50 feet high, whirl like pinwheels and instill an excitement in students and a pride in a community that is hard to match.

They're wind turbines installed in schoolyards around the west, whipping up energy to help power the schools, and whipping up enthusiasm for next-generation scientists and engineers.

The Wind for Schools project of the U.S. Department of Energy's National Renewable Energy Laboratory is churning, having installed 42 Southwest Windpower SkyStream 3.7 turbines so far, with a goal of five new turbines each year for the 11 states already part of the program. Eventually, 35 states are expected to participate.

That's enough critical mass, say the researchers, for the idea to catch fire, and for states and school districts to take on the installations themselves. And when that happens, there will be such a groundswell of informed eagerness for wind energy among young people that the fear of shortages of skilled labor for the wind industry might subside.

"It's a great fit for our area in that wind is something we deal with all of our lives around here," Kyle Hebberd, superintendent at the Walsh School District in southeast Colorado, said at the dedication ceremonies for the wind turbine at Walsh High School. "It's great to see it finally put to some productive use."

The students at Walsh walk by their wind turbine every day, get some of their electricity from it, and can incorporate the energy data into their math and science classes.

More than that, the turbine at the high school blows excitement all over town.

This month, the students in the upper grades at Walsh Elementary School are crafting their own mini-turbines in what teacher Janet Chenoweth calls the Blade Challenge. It's embryonic in Colorado, but huge in Maine, where more than a dozen high schools compete to design blades that will create the most power.

Chenoweth, who teaches science to fourth-, fifth-, and sixth-graders, became a Wind Senator through the KidWind project and is becoming an ambassador for wind-energy curriculum in southeast Colorado.

"Oh my gosh, they're excited," Chenoweth said. "Ever since the wind turbine went up there, my kids have been saying, 'When can we do wind energy?' If we can get them excited over here, the science teachers in the high school can take it from there."

The idea began in Colorado, where NREL has its headquarters.

"We used rural Colorado as our sandbox to see what rural school officials were interested in," said NREL engineer Larry Flowers, the National Technical Director of Wind Powering America.

After meeting several times with rural officials, "We decided a simple, low-cost package with a curriculum, sited and installed in collaboration with university engineering students and the local electric co-op was the ticket."

Colorado Gov. Bill Ritter said the school wind turbine projects are an important example of how Colorado is participating in the "New Energy Economy."

"Educating today's young people about the benefits and mechanics of renewable energy prepares them for a wealth of future opportunities," Ritter said. He said the Wind in Schools program also demonstrates the crucial role rural communities can play.

"It's a great way to introduce wind energy to communities in a not very threatening, educational way," said Ian Baring-Gould, senior research supervisor for wind technology deployment at NREL's National Wind Technology Center. "It allows the community to take a more active role in their energy future."

It needs to happen because the Department of Energy (DOE) envisions the United States getting as much as 20 percent of its electricity from wind power by 2030, the year today's toddlers graduate from college, eager to establish careers in forward-looking industries. 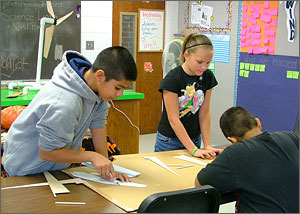 The idea is to make the wind turbines points of community pride, especially in rural areas. The rural electric companies that brought electricity to the towns are enthusiastically helping to sponsor the installations. Wind energy can be a way to keep young adults in town, with the prospects of interesting jobs, rather than seeing them flee to the cities.

Once a school gets a turbine, the school down the road wants one, and so do the local car dealership and other businesses.

In late January, NREL and the DOE's Wind and Water Power Program announced that five more states had been selected to receive $60,000 each in support of the Wind Powering America's Wind for Schools Project

"What this program is addressing is the bottleneck in brainpower," said Todd Haynes, Boise State University's Wind for Schools coordinator. "That's why wind in the schools is all about education." 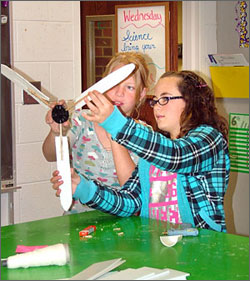 Jaci Sharpe and Dakota Cook talk about what kind of pitch will work the best for their blades. The annual Blade Challenge gets fourth- and fifth-graders excited about the science curriculum at Walsh High School, where a wind turbine provides some of the energy to power the building.
Credit: Janet Chenoweth

Wind Powering America is about renewable energy, but it's also about jobs.

"We had identified the need for a skilled workforce" for wind energy even before DOE's 20% by 2030 Report of two years ago, Baring-Gould said.

"We're really talking about a paradigm shift" with the expected surge in wind energy, Baring-Gould said. "The last time we went from zero to a significant amount was with nuclear energy in the 1950s and 1960s."

Ian-Gould notes that there are universities with huge programs devoted to nuclear energy, but nothing comparable for wind energy.

With fewer middle-school students expressing an interest in science, the prospects of there being enough skilled young adults to enter the growing wind-energy field, was looking like "a train wreck," he said.

So, the idea of Wind Application Centers at land-grant universities was born.  College students would take classes in wind applications, then be assigned to elementary or secondary schools where they would oversee the installations and talk to pupils about wind energy.

"We're kind of feeding the pipeline, training engineers and getting the kids to think about science," Baring-Gould said.

The 2.5-kilowatt turbines, with rotor blades 12 feet in diameter, are big enough to power about a third of the electricity needed for a single-family home, so they produce just a slice of what a school needs.

Still, they generate about $400 worth of electricity a year and in about five years can offset the $2,000 the school is asked to contribute to the upfront costs of the turbine.

The school gets more than green power. There are a curriculum on wind energy and a guide for the classroom teachers. And, data from the turbines is online, giving the teachers and students a chance to play with the numbers in nearly real time.

"How much energy did the turbine produce last night?" students will ask in the spirit of intra-town competition. "Did we produce more energy than they did?"

The mania is already on display.

Zach Parker let the middle-school students "turn the wrench a few times" when he was assembling a SkyStream 3.7 at the middle school in rural Jerome, Idaho.

"When the turbine was raised to its final height, the students were all saying, 'Look, I built that,'" Parker, a 2009 graduate of Boise State University, said. "I explained to them about power and energy, they helped put the bolts in. They were excited about the whole process."

By the time the rotors started moving, "They were jumping up and down, they were bringing their parents over."

On dedication day, Parker helped the math teachers on a lesson on the mode, mean and median wind speed of the turbine. "I'd never seen a math class where the kids were that engaged. Usually there are a couple who are just too cool for math. But that wasn't the case that day."

The turbine project excited Parker, too. In October, he started work for Gamesa Energy, one of the largest wind-turbine manufacturers in the world.

Recently, a wind turbine was being installed at a school as afternoon crept to evening. Cars started arriving in the parking lot, filled with students and parents. When the installation was complete, "lights started blinking, horns were honking, it was a total community event," Becki Meadows, senior engineer for NREL's Wind Technology Deployment, recalled.