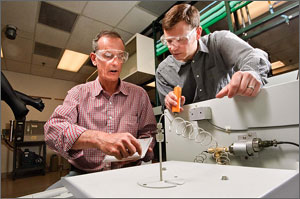 The NASA engineer responsible for the batteries needed for spacewalks now is working at the Department of Energy's National Renewable Energy Laboratory to help design safer lithium-ion battery packs for sky walkers and automobile drivers alike.

"We at NASA share the same challenges that DOE and NREL have in developing batteries for cars," said Eric Darcy, the battery group leader at the National Aeronautics and Space Administration's Johnson Space Center.

Whether it's "manned space travel or manned automobiles," the hurdles are the same, Darcy said. "Designing a safe, very large and lightweight battery pack for the confined space of manned vehicles is challenging."

In the future, battery-powered automobiles are expected to grab a big share of the market away from gasoline-fueled vehicles.

Lithium ion batteries are the technology of choice because of their high energy and power densities, Ahmad Pesaran, Energy Storage Group Leader at NREL, said. But the batteries must be able to withstand abuses that could lead to thermal runaway and potentially fire.

Researchers in NREL's Energy Storage Group are modeling and testing how well the risk of catastrophic thermal runaway can be mitigated in lithium-ion cell/battery designs. "We're privileged to have Eric working with us for nine months," Pesaran said.

NREL and NASA engineers have invented specially designed small "coins" made of primarily aluminum and copper, that when implanted into lithium ion cells will induce an internal short circuit on demand. The ability to accurately replicate internal shorts in battery cells is crucial to finding out how hot a battery can get when one of its cells fails because of a rare manufacturing defect. Those defects happen only about one time in 1 million in the field, but because of their catastrophic consequences, NASA and NREL need to lengthen those odds if lithium-ion batteries are to become the workhorses of space walks and automobile transportation.

Darcy brings 23 years of experience in putting together batteries for manned spacecraft. With the retirement of the Space Shuttle Program, and the uncertainty of when a replacement will be available, NASA needs a new-generation, longer life spacesuit battery pack that will support dozens of walks based from the Space Station.

"Eric brings the perspective and broad experience base of the aerospace industry," says NREL researcher Kandler Smith. The aerospace industry doesn't share the same cost constraints of the automotive industry, "but the processes employed for battery risk assessment and design for reliability are directly applicable."

NREL researchers have characterized the conditions under which an internal short circuit in a spacesuit battery can lead to a thermal runaway, which can cause a catastrophic explosion.

"Knowing the vulnerabilities of that battery is useful to find a way to mitigate the risks," Smith said. 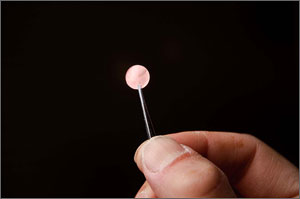 This dime-sized coin made of aluminum and copper is used to induce short circuits in lithium-ion batteries. The ability to induce shorts on demand is crucial to finding out how hot a battery can get when it fails while in active use.
Credit: Pat Corkery

NASA has been developing a new spacesuit battery for three years, preparing for the time when the current short wet life battery packs of the shuttle-to-space-station era would require replacement.

"We now need at minimum, a five-year battery, and with that comes a whole new chemistry, lithium-ion," Darcy said.

"That carries with it the risk of it rupture and fire," Darcy added. "That's why we've teamed with NREL to characterize the small range of conditions under which this battery can go into thermal runaway." The Interagency Government Agreement between NASA and NREL was signed in 2008.

The battery under study contains 80 laptop-sized lithium-ion cells, weighs about 15 pounds, and is about 11 inches long, four inches wide and five inches deep. Laptop batteries can last three years if they're treated kindly, albeit they usually aren't, since most of the time they are kept fully charged and operate at high temperatures inside the cramped internal space of a laptop.

The new spacesuit battery will rest inside the backpack on the spacesuit, which packs a lot of thermal insulation, preventing it from getting very cold or very hot. So, even though it will be in the forbidding climes of outer space, it will experience less stress than a battery constantly being charged and discharged on planet Earth.

Designed to Last for 50 Space Walks

The battery is designed to endure some 50 multi-hour space walks over its five year life, although typically it would be taken out for about half that many walks.

Suits will accompany the astronauts on the transfer to the space station, while others will be parked permanently at the station, for the times when the astronauts have to take a walk when there's no shuttle spacecraft around.

NASA is planning more lower-orbit satellites to observe the Earth for climate-change data. The space station is going to be crucial for those close-Earth observations, and that means safe, long-lasting spacesuit batteries will be crucial, too. 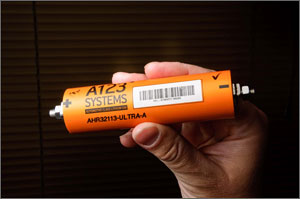 This prototype lithium-ion battery for automobiles has the advantage of being lighter and taking up far less room than the batteries now in hybrid cars.
Credit: Pat Corkery

NASA needs to learn all it can about lithium-ion batteries because the nickel-hydrogen batteries now in use will expire in 2017.

Tiny latent defects imbedded in cells can be missed if testing isn't done under the strictest conditions. Those defects could cause an internal short circuit and a catastrophic event.

Internal short circuits are rare, but not unheard of. "You hear about these one-in-a-million recalls, when a laptop or a cell phone's battery defect causes it to go into flames," Darcy said.

Early this month, Darcy and Smith audited a lithium-ion manufacturing process. "They had some good processes and some weaknesses," Darcy said. "We made a long list of all those actions they ought to consider correcting to produce a better, safer product."

The lessons learned at the audits can be used by NREL to conduct similar audits on automobile battery manufacturers, Darcy said.

"It's important that they do so, because if an incident occurred on a car battery, it would be a cancer to everyone who uses lithium-ion batteries," Darcy said. "Is mine going to have that same effect?

"They need to know why or why not. What measures can they take to minimize the risk of some kind of internal short inside the cell that can make it blow up?"

Darcy, a chemical engineer, was one of four NASA employees accepted into the space program's Innovative Ambassador program, allowing him to spend up to a year at another organization.

He chose NREL for its "unique capabilities in the field of batteries. " He started at NREL in January and will return to Houston in October.

Darcy has plenty of experience abusing batteries, subjecting them to worst-case conditions, while his new NREL colleagues have ample experience in using mathematical models to predict how they behave when abused.

"That's the mutual benefit of sharing our information," Darcy said. "I can help ground some of the models that NREL is producing. NREL can help me learn how to use the models so I can reduce the development time to a safe and effective design solution.

"I'll come back to NASA a better battery engineer because of what I'm learning at NREL in the areas of simulating battery behavior under abuse conditions," he said.