The clean wind energy industry must expand significantly in the next two decades to fulfill a strategy of generating 20 percent of the nation's electricity. To provide the technological foundation for that dramatic growth, the National Renewable Energy Laboratory (NREL) is embarking on significant improvements at its National Wind Technology Center.

Engineers are installing the two largest turbines ever tested at the laboratory — a 1.5 MW turbine manufactured by General Electric and a 2.3 MW turbine from Siemens Power Generation.

Both turbines are being erected on the NWTC's eastern perimeter for commissioning and operations in October. They will run for years under close observation and elaborate instrumentation. With data from these experiments, researchers will be working with the wind industry to increase turbine performance, improve durability and decrease loads. 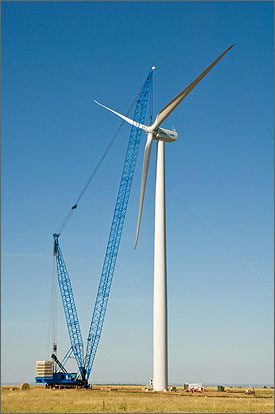 The new turbines also allow NREL to take a significant step forward in generating its own clean electricity and meeting the Laboratory's aggressive sustainability goals and reduce greenhouse gas emissions for its expanding research campus and support facilities. The new turbines are expected to generate twice as much energy as the NWTC uses. The U.S. Department of Energy (DOE), NREL and Xcel Energy are working to define an agreement that will allow surplus energy to be exported and sold to the local utility grid.

DOE Purchase for the NWTC

DOE purchased the 1.5 MW turbine for the NWTC. Crews using a crane assembled it over three days. The rotor was expected to fly — or be attached — on August 21.

The DOE turbine will operate atop a 262-foot steel tower. The diameter of its rotor will reach 253 feet.

"The DOE turbine is a national asset for the NWTC to operate as a test bed for wind energy research and development said NWTC assistant director for Testing and Operations, David Simms. "They would like us to offer it as a test bed for the best and brightest researchers from universities, laboratories and companies around the country."

The DOE turbine was manufactured by GE and is a workhorse of the domestic wind power industry. More than 10,000 now operate at commercial wind farms around the nation, accounting for about 50 percent of the U.S. market. Because of its market share, NREL researchers say it is important to more fully understand the turbine's performance in the field and look for ways to help advance its design.

Among the questions researchers will address are the microclimate in which the turbine operates, the aerodynamics of the turbine design and the effects of turbulence on its load and performance — and how all these factors may combine in potentially unforeseen ways. The NWTC was located at the base of the Rocky Mountains to take advantage of particularly gusty, challenging winds in order to challenge turbine designs in conditions not typically seen at commercial locations. 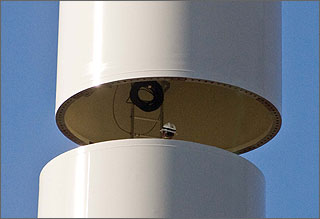 A worker waits for a crane to gently deliver a section of the metal tower supporting a General Electric 1.5 MW wind turbine at the National Wind Technology Center.
Credit: Pat Corkery

"If we could improve performance, thousands of turbines could remain in operation for years beyond the industry's original expectations," said NREL senior project leader Jim Green.

Additional trucks will be delivering the Siemens wind turbine, the cranes, and other installation equipment in August and September. The Siemens turbine will use a second tower of the same height, but its rotor diameter is 331 feet, or more than 30 percent bigger than the DOE turbine. The Siemens turbine employs an advanced new rotor design that needs field testing in the NWTC's gusty and challenging conditions. Siemens has opened a research office in Boulder to provide engineering support and maintenance.

Siemens Turbine Among the Largest in U.S.

"It's as large as any turbine in North America," said project leader Lee Jay Fingersh. "The final design is different than most turbines with a different blade shape. Land-based turbines are getting larger to meet the demand for wind energy. This is the direction of the wind industry and we want to understand the aerodynamics of these new, larger machines."

*The NWTC is a testing site. Production at more typical commercial wind farm would be higher.

NREL is providing the site, the foundation and the electrical connection for the turbine, the cost of delivery, installation services and expertise in field aerodynamics testing, structure and reliability testing and meteorological analysis. NREL and Siemens have signed a cooperative research and development agreement that is expected to continue into 2014.

The Siemens turbine was selected for testing by the DOE after a national competition.

More Than Meets the Eye

As considerable as the new turbines are, NREL researchers are equally interested in what is required beneath the ground in order to support such imposing machines, which can weigh more than 300 tons.

NREL engineers worked with Renewable Energy Systems Americas, Inc., to pour the large customized concrete foundations for the turbines. The concrete was delivered in July in impressive convoy of more than 80 trucks.

NREL and RES Americas have signed a cooperative research and development agreement to study the design and performance of turbine foundations to increase the reliability of non-turbine components and lower the cost of wind-generated power. RES Americas recently established its U.S. headquarters in Broomfield, Colo., near the NWTS. 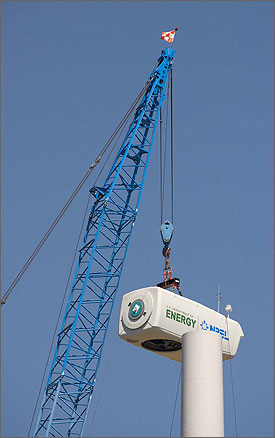 "This CRADA will result in some of the first-ever measurements of loads inside and under the foundation of an operating wind turbine," Green said.

After the two new turbines are operating, NWTC engineers will erect two new meteorological towers to the west of the turbines. Each tower will stand 440 feet high and feature more than 60 instruments to collect the most advanced information on the wind, temperature, dew point, precipitation and other weather features that can influence the performance and lifespan of a wind turbine.

NREL and the wind energy industry are turning to taller towers to characterize the wind resources and conditions higher up where new, larger turbines operate.

The new towers also will feature LED lights that require virtually no maintenance and use a fraction of the energy of conventional lights.

After the towers are completed this fall, crews will remove the red flashing warning lights atop the new wind turbines and three of the existing meteorological towers, too, leaving the NWTC with a total of three lighted towers.

Learn more about wind energy research at NREL and the feasibility of using the wind to generate 20 percent of the nation's electricity by 2030.