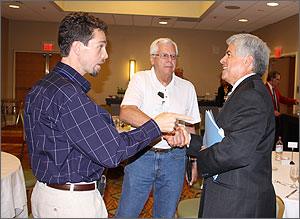 More than half of the states in the U.S. have embraced renewable energy portfolio standards (RPS). Now comes the hard part — complying with those aggressive mandates and building clean energy economies during the deepest national recession in 70 years.

Two dozen lawmakers and legislative staffers from Maryland to Washington state visited NREL for three days to learn about clean energy technologies and market incentives. They are members of a special non-partisan Advisory Council on Energy for the National Conference of State Legislators.

State officials regulate utilities and establish laws that develop markets for renewable energy and energy efficiency. The briefings the council develops with NREL's help will be distributed to state officials nationwide.

"The world's big new renewable energy market is the United States," NREL Director Dan Arvizu told the lawmakers. "If it doesn't happen where you live and in the communities you represent, then it's not going to happen. We have to find ways to move these technologies into the marketplace faster and differently than how we've done it in the past." 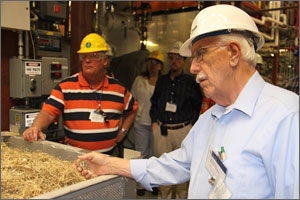 Idaho State Rep. George Eskridge sifts through a sample of corn stover while listening to a presentation on cellulosic ethanol at the Alternative Fuels Users Facility. In the background is Tennessee State Rep. Jim Hackworth.
Credit: Joe Verrengia

"Everything on the Table"

Among the programs they visited were the National Center for Photovoltaics, the National Wind Technology Center and wind-to-hydrogen storage, the National Bioenergy Center, including cellulosic ethanol and algae fuels research, and the VIBE virtual dashboard display of state and community biofuels information.

"The timing of this visit is perfect with the Recovery Act programs and the needs of our states," said Kansas State Rep. Carl Holmes, who chairs the council. Holmes' district in southwest Kansas has ethanol plants and wind farms, as well as significant transmission lines.

"If we're going to move forward with the economy and the environment, we need to put everything on the table and work through it," he said. 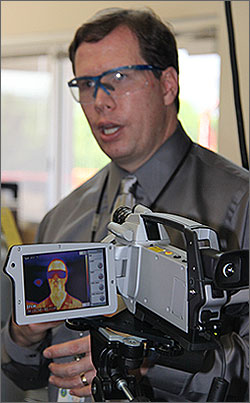 NREL Senior Scientist Matthew Keyser discusses advanced battery development and testing with visiting lawmakers. In the foreground is a thermal image of one of the lawmakers. The thermal camera is used to locate weak spots inside batteries that compromise performance.
Credit: Joe Verrengia

Perhaps the most compelling example is Nevada. It has a RPS of 25 percent renewable energy by 2025 and some of the nation's best solar and geothermal resources. Utility-scale photovoltaic and concentrating solar power plants are being developed near Las Vegas along with existing hydropower facilities.

But the brilliantly-lit Las Vegas strip also is a symbol of the nation's energy consumption and sustainability concerns. Nevada's economy depends heavily on tourism — Las Vegas alone has 160,000 hotel rooms. Revenues are down 45 percent from two years ago, and lawmakers have both raised taxes and cut $1.35 billion in spending, said state Sen. Mike Schneider. He chairs a special state committee on energy, transportation and infrastructure.

"We don't just need renewable energy — we need to bring renewable energy manufacturing to Las Vegas," Schneider said. "A PV plant or a wind farm is great, but they don't employ many people. And once they are built, you have a lot of unemployed construction workers."

For Most, a Portfolio of Answers

For example, the Maryland General Assembly recently voted to reduce statewide energy consumption by 15 percent by 2015 and adopted a RPS of 20 percent by 2022.

Maryland's historic communities are crowded with vintage buildings fitted with out-dated systems in need of weatherization. Its hazy skies can't match Nevada's solar horsepower, but it has enough sunshine for effective distributed PV systems on residential and commercial rooftops. It also has biomass possibilities.

"Now I can go to county commissions in my district and talk with them about new zoning and building codes that can make this possible," said Maryland state delegate Sally Y. Jameson. "I can talk to them about a solar canopy on the parking lot at the mall so we can generate power while we shade vehicles."

Learn more about NREL's work with state and local governments.