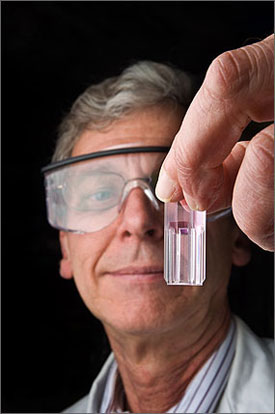 Thank sunlight, algae and green plants for the air we breathe, the food we eat and, in the not-too-distant future, the fuels that power our trips by plane, rail and automobile.

In a process that is as complex as it is elegant, as breathtaking as it is breath-making, sunlight excites electrons in plant cells setting off a chain reaction that rips apart water to release oxygen and then changes carbon dioxide to sugars to produce fuel.

Now, a couple of scientists at the National Renewable Energy Laboratory have found a simpler, faster and far less costly way to measure manganese — the metal that helps plants split water. It's a breakthrough that could support the development of photosynthetic systems for producing biofuels.

"This is going to make a difficult analysis much more routine," NREL Research Fellow Dr. Michael Seibert said of the new process that quantifies the manganese content in plants that split water to get electrons for biofuels.

Up to now it has taken a half day and equipment worth as much as $200,000 to measure manganese in the water-splitting process of photosynthesis.

The NREL process takes a half hour and uses equipment that costs less than $10,000. And that opens up the process to any professional or undergraduate lab in the world.

"It's a new tool that makes life in the lab easier," Seibert said. "It could help our lab and others make a lot more progress in understanding photosynthesis … and ultimately developing artificial photosynthetic systems."

A paper on the study, co-authored by Seibert and his Russian colleague Boris Semin was just published in the journal Photosynthesis Research.

Seibert has a doctorate in molecular biology and biophysics from the University of Pennsylvania. He worked at General Telephone Laboratories for six years before joining the Solar Energy Research Institute, the precursor to NREL, in 1977. Semin, a professor at Moscow State University in Russia, has spent four months each fall for the past decade at NREL working with Seibert.

Plants and algae convert the energy of sunlight into fuel, a process that has served them well for eons, and, by the way, has kept animals and humans alive by converting water to oxygen. But humans must better understand and improve on that natural process to gain the maximum benefit of biofuels.

Seibert and Semin used spinach when they quantified the manganese ions in the water-splitting process, but the assay could be used for algae or any other organism that does plant-type photosynthesis. The procedure counts the number of manganese ions per photosynthetic electron transport chain, the natural process that starts with sunlight and fixes carbon, or releases hydrogen, and oxygen. 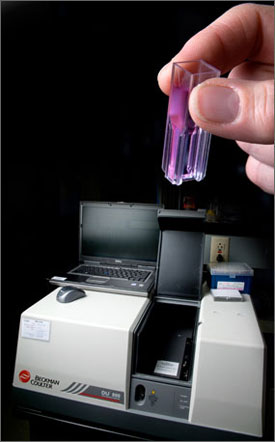 Measuring manganese used to take a half day and involve expensive equipment. The NREL process takes a half hour and uses equipment that costs less than $10,000.
Credit: Pat Corkery

The counting of manganese has been done before, but only via complex assays using Atomic Absorption spectroscopy or Electron Paramagnetic Resonance spectroscopy, processes that take several hours and require extremely expensive equipment.

Manganese ions can be depleted when plants are exposed to heat, excess salt, heavy metals, radiation, light, pH extremes and other stresses. That's why it's often crucial to know the exact manganese content in photosynthetic membranes.

Seibert and Semin used a laboratory-grade, visible light spectrometer and very small amounts of spinach membranes. Their workspace was a countertop.

First, they purified the samples. All green plants contain small amounts of manganese that bind on the surface of the membranes but that don't have a specific function in photosynthesis. If those manganese were included in the count, the information would be useless. So, they used calcium chloride to purify the samples.

Next, they used hydrochloric acid to extract the functional manganese from the membranes.

Now they had the manganese, but they also had contaminating membrane particles that could absorb or scatter light and affect the accuracy of the assay. To spin away the impurities, they used a small counter-top centrifuge, spinning for several minutes at 12,000 revolutions per minute.

So, they had purified manganese but no easy way to quantify it.

A Day in the Library

The final "Aha!" came when Semin and Seibert realized that they could use a dye to determine the precise number of manganese ions used when plants split water and make oxygen.

"The Eureka moment was learning that the dye was specific for only manganese," Seibert said.

How did he and Semin find that out?

They went to the library, and found that someone a decade ago had used the dye 3,3,5,5 tetramethylbenzadrine to determine the manganese content of salt water. "Sometimes a day in the library can save months in the laboratory," Seibert said. "From there it was a development process to clean up the sample material so that we could use the dye" to fingerprint the manganese. The dye binds to the manganese in the solution and changes color in proportion to the amount of manganese present.

When they applied the dye, sure enough, it revealed that there were four manganese ions per electron transport chain, just as had the far more expensive spectroscopy processes. "If we can easily characterize how much manganese there is in the natural system, we can start replacing the natural manganese with other metals such as iron to learn how the system works biochemically," Seibert said.

That in turn could lead to information useful for artificial systems to split water and make, say, hydrogen fuel without having to use an electrolysis system.

That's in the future. But perfecting the understanding of the water-splitting process of photosynthesis — in a structure called Photosystem II — is a key step in providing renewable, non-polluting fuels that can power the future of transportation without contributing to global warming.