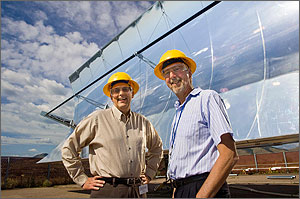 Huge parabolic mirrors catching the sun's rays could crisscross America's deserts soon, thanks to a breakthrough that may greatly lower the cost of solar power.

A small solar company has teamed with scientists at the National Renewable Energy Laboratory to develop massive curved sheets of metal that have the potential to be 30 percent less expensive than today's best collectors of concentrated solar power.

The SkyTrough Parabolic Trough Solar Concentrating Collectors will be longer than football fields and look like fun-house mirrors, but could be the game-changers in solar energy's bid to out-muscle gas and coal in providing electricity for America's homes.

The breakthrough recently was honored by R&D Magazine as one of the top 100 technical innovations of the year, and by the Federal Laboratory Consortium with a 2009 Excellence in Technology Transfer Award.

Solar power has been nipping at the heels of fossil fuels for decades, but hasn't yet found a way to be cost-competitive on a large scale.

'The Sky is the Limit'

"Glass is highly durable, but is heavy and hard to shape without added cost," Jorgensen said. "Once industry sees the advantages of the silver polymer and is convinced the product is durable in an outdoor environment, the sky is the limit."

Gee said the film, trademarked ReflecTech® Mirror Film, "has the same performance as the heavy glass mirrors, but at a much lower cost and much lower weight. It also is much easier to deploy and install." The glossy film uses several layers of polymers, with an inner layer of pure silver.

The government scientist and the chief technology officer say the cost advantage is about 30 percent, a huge dividend in an industry that has scratched together savings one percent at a time for decades.

Solar scientists for years have understood the advantage of the parabolic shape, which distorts the rays, concentrating the sun's heat onto a tube filled with heat-transfer fluid, which carries the heat to the boilers in a power station.

The heat-transfer fluid can get as hot as 400 degrees Celsius (more than 750 degrees Fahrenheit).

More than 10 Years in the Making 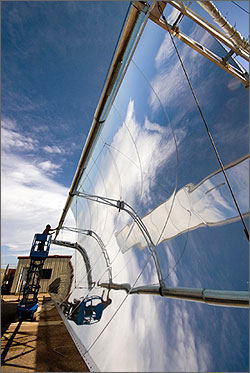 The thorny problem has been how to find an alternative to glass, something that is cheaper and lighter, easier to install, yet durable in the hot sun.

The story goes back to the late 1990s, when Gee and Jorgensen worked with a small $25,000 federal grant to see if they could come up with an alternative reflector.

"Within two years, we had enough data to believe we had a substantial improvement relative to predecessors," Jorgensen recalled.

They found that silver had great potential, but that by itself the metal would delaminate and corrode too easily. It's the combination of metals and polymer film layers that protect the silver that makes the film commercially viable.

"We reduced the concept to practice and filed for the patent," Jorgensen said. SkyFuel now holds the exclusive license for using the patented technology developed by both Gee and Jorgensen.

NREL's technology transfer office aims to make it easier for private industry to invest in renewable energy by developing mutually beneficial partnerships, including teaming on research and patents.

A prototype SkyTrough is capturing the sun's rays right now atop South Table Mountain overlooking NREL's Golden, Colo., campus; a larger pilot system also has been installed at SkyFuel's location in Arvada, Colo., a few miles north of NREL. The parabolas could spring up by the end of the year in the highest desert regions of California, and soon in Arizona, Nevada, New Mexico, Texas and Colorado, states blessed with lots of sunshine and vast open areas.

Parabolic collectors have been around since the 1970s. Back then they were about seven feet wide and 20 feet long, a half dozen or so lined up to collect the sun's rays, a motorized system turning the mirrors as the sun moved across the sky.

"The natural evolution was to get larger and reduce costs," said Gee, who worked with Jorgensen in the 1980s at the Solar Energy Resource Institute, NREL's predecessor.  "Each generation got larger," pointing to the day when utility companies would want to purchase the troughs for 50- to 100-megawatt plants.

Gee describes the technology transfer as a natural outgrowth of NREL's presence in a large metro area. "Just the fact that you have that level of expertise in a national lab, you're going to have naturally occurring spinoffs. This didn't occur through any particular program, other than the contact between different people in the research community in this particular area of solar."

Gee recalls the methodical testing of samples at NREL's optical materials lab. "Bit by bit, we improved the performance of these samples," he said.

"The real important moment came when we filed the patent. It took many years of working through the patent process, but we were rewarded with it in 2007.

SkyFuel's R&D Center in Arvada has 16 employees, mainly scientists and engineers that have been improving the design of the SkyTrough.

"Just two-and-a-half years into the development cycle, it looks like our great technical team is going to be able to take a big chunk out of the costs of installing CSP systems," Gee said. "We're not doing this in tiny steps but in big chunks."

NREL's contribution to the breakthrough film "was absolutely critical," Gee said. "Over the past two years, we've had the ability to ask the scientists there, where they have the optical test equipment, to come over and bring their specialized equipment to measure the accuracy our parabolic trough collector."

"It was absolutely important for us to verify the optics of our technology before we put it in the field."

Several utilities that have installed expensive fossil-fired plants in the past decade "are very excited about solar in general, and many of them see our technology as a very important part of that," Gee said.

Gee maintains that it all could have come together years ago, if not for wavering. "It requires political will to make this happen," Gee said. "There's no reason why we couldn't be 20 years ahead of the game, compared to where we are now.

"A lot of work in materials has evolved," Gee added. "It remains to be seen whether this time we break through. It depends on how seriously climate change is taken, what sort of actions are taken to move us away from fossil fuels."

Jorgensen has been working on renewable energy for 30 years. He calls today's climate "a perfect storm … with the realization by the public of the importance of alternative energy, with politicians listening to the public, with energy demands and with security issues of not wanting to rely on foreign oil.

"With the whole impact of global environmental change, we're truly at the pinnacle of a golden age," Jorgensen said.