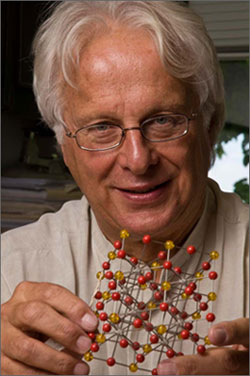 The same set of atoms can have starkly different properties depending on their arrangement in space, says Center for Inverse Design Director Alex Zunger.
Credit: Pat Corkery

Like most everything else we take for granted in the macroscopic world, the logic of design breaks down in the quantum realm.

Most designers, be they architects, hair stylists or aerospace engineers, start with a concept of the end product (buildings, coiffures, fighter jets) and work backward toward the building blocks and actions required to realize the images crystallized in their minds.

Materials scientists seeking new semiconductors, superconductors, lasers, sensors, magnets and alloys have worked in opposite fashion. Generally they stumble across a new material in nature or via laboratory happenstance and then try to figure out its physical properties and potential uses. Such reliance on accidental discovery is "actually very pathetic," concludes Dr. Alex Zunger, a materials theorist and Research Fellow at the U.S. Department of Energy's National Renewable Energy Laboratory.

"The development of a technology based on accidentally discovered materials normally takes about 20 years because it takes a long time to figure out what is it exactly that we discovered by accident," Zunger said.

Starting with a 'Dream'

He directs the new NREL-led Center for Inverse Design, a $4 million-a-year for 5 years research endeavor aiming to turn materials design on its head. The center's success could accelerate the pace of materials discovery and trigger leaps in performance and efficiency in everything from sensors to lasers to solar panels.

The center is a collaboration among NREL, Northwestern University, Oregon State University, and the SLAC National Accelerator Laboratory, which Stanford University operates for DOE. It is just beginning operations.

The starting point will be articulating what would the properties of a "dream material," as Zunger puts it. For transistor applications, a dream material will allow extreme electron mobility; for photovoltaics it would resist deterioration while allowing greater absorption of incoming light.

"Everybody has a dream material in mind that doesn't exist," Zunger said. "Most of us have resigned ourselves to the fact that life is tough and we're not going to get our dream."

But, Zunger hopes to make the dreams of material scientists come true.

The fundamental insight behind the Center for Inverse Design is that the same set of atoms can have starkly different properties depending on their arrangement in space. Diamonds and graphite are both elemental carbon. But graphite is soft and black — the stuff of pencil leads — while diamonds are hard and transparent and star in engagement rings. The difference is how the carbon atoms arrange themselves, which in turn dictates electron behavior. Electrons, the quantum drama's lead actors, dictate a material's hardness, chemical reactivity, and how it reflects or absorbs light, transports electrons and so forth.

The Center for Inverse Design will work in three main steps.

First, Zunger and colleagues in NREL's Solid State Theory Group will envision a realistic "dream material" for which there is a clear need. They then will use supercomputers running NREL-developed genetic algorithms — mathematical routines capable of learning as they go — to come up with a manageable number of variations on a recipe of atoms. An example might be a semiconductor with specific optical properties consisting of 25 percent aluminum arsenide molecules and 75 percent gallium arsenide molecules stacked in whatever arrangement that would produce the targeted optical behavior. With just 64 atoms capable of producing roughly 500 trillion possible atomic layouts, genetic algorithms capable of focusing quickly on the most promising combinations are indispensable.

Next, Zunger's team of NREL theorists will pass some of the semifinalists to NREL Research Fellow David Ginley's group, which specializes in combinatorial chemistry. "Combi," as Ginley calls it, is an automated, high-throughput approach to material synthesis, allowing scientists to create hundreds of variations on a chemical theme at once. Such synthesis involves the creation of crystal superlattices, in which single layers of atoms are applied using lasers or molecular beams. "We do libraries of materials and see whether the area theory highlights look interesting," Ginley said.

Third, Ginley's team will pass promising samples on to the specialists at Oregon State, Northwestern and Stanford, who are, as Zunger put it "the best growers in the world" of phase-pure crystal superlattices.

A Lot of Back-and-Forth

"Many of the materials that we plan to examine have not previously been synthesized," said Douglas Keszler, distinguished professor at Oregon State and one of the center's principal investigators. "In some cases, we will need to develop new growth methods and techniques to strictly control compositions and structures."

Zunger expects a lot of back-and-forth. The combi team may find a theorists' top choice impossible to make, for example, or find that, in the physical world, materials on the lower rungs of the theorists' draft board show greater promise than the assumed top prospects.

"My role is to take an astronomical number of possibilities, and, without visiting all of them, find where the answer might reside in that space," Zunger said. "Then I'll throw it to the experimentalists, and they'll throw something back."

Without advances in combinatorial chemistry and computing power over the past decade, the Center for Inverse Design would never have been possible, Zunger said. But the real enabler was in the realm of theoretical physics — in particular, advances in density functional theory, he said.

"It permitted us to cast the good old equations of quantum mechanics in ways that are useable and give us numerical results."