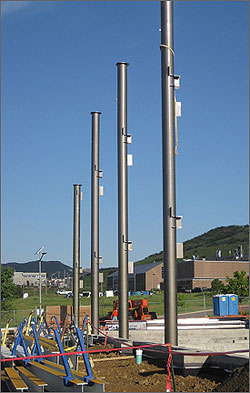 Building a support structure of something, tried, true and tested like "off the shelf" steel is standard practice in building construction. NREL's effort to create the most energy efficient and "green" office building is putting a twist on an old standard. The columns that will carry the weight of floors and walls in the new Research Support Facilities (RSF) are actually castoffs from the natural gas industry – recycled pipe.

"It's a perfect circle," said Philip Macey, project manager for RNL, the design firm for the RSF, "There's such elegance in this building in the fact that 'old' energy is providing the support for NREL's new building where new energies will be developed."

The RSF is under construction at NREL's South Table Mountain Campus near Golden, Colo. It was designed to achieve LEED Platinum status from the U.S. Green Building Council and its energy saving features will be shared with, and hopefully replicated by, commercial builders across the country.

"Early in the design process, the team chose to use reclaimed natural gas pipe in an effort to utilize a reclaimed product in the building for the purpose of LEED as well as demonstrating the use of a reclaimed product that is available to anyone," said Derek Oliver, Haselden Construction's pre-construction manager.

The steel natural gas pipe used in the RSF was purchased from a company that specializes in salvaging gas piping that has been removed from service. Typically, pipes sold by these salvage retailers come from fields in Texas or Louisiana, in this case, the RSF gas pipe was never used and was sold by the owners to the reclamation yard.

"There are steel stockpiles like this around the country, but you have to go hunting to get the right sizes and quantities," Macey said.

Unique Feature Required a Plan B

In case the natural gas pipe wasn't available for the RSF, the architects also drew up the building with traditional steel. For a while, it looked like Plan B would have to be implemented. However, a week before it was needed, Haselden found enough recycled gas pipe to complete the building as designed, which greatly pleased the contractors.

"We feel we need to task ourselves with seeking recycled materials first," Macey said. "As a culture, we need to not make 'new' the first choice because there is an urgent need to reduce energy consumption and our carbon footprint." 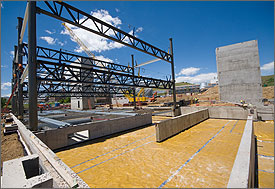 Recycled gas pipe used in the RSF is made from steel, a common support element in buildings. Stockpiles of recycled steel can be found through the U.S. although reclamation yards are more prevalent on the coasts.
Credit: Pat Corkory

Recycled steel is a win-win for builders because of its green factor and because it can be purchased at a very competitive price. "Recycled steel doesn't go bad," said Macey. "You simply can clear the rust off and it's a big resource worldwide."

Once the team found the reclaimed pipe they envisioned for the project, they went extra lengths to make sure it would provide the support needed for an office building such as the RSF.

"Structural tests were performed on samples of the desired pipe to ensure that the material would meet the structural requirements of the building," Oliver said.

While the recycled natural gas pipes used in the RSF passed the required strength and welding tests, the design team went the extra step to reinforce the pipe at the lower levels.

"We are filling the bottom two to three floors with concrete to help carry the building loads," said NREL Senior Construction Manager Carl Cox. However, the steel tubes which average 33 feet in height are still hollow in the upper floors of the building and serve as a unique architectural feature in the office space.

"The end result of using reclaimed gas pipe for the RSF is a high quality, architecturally appealing product that helped reach the LEED Platinum requirement for the project," Oliver added. 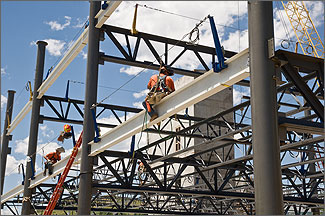 The rounded natural gas pipe will be visible in some areas of the RSF serving as a unique architectural feature.
Credit: Pat Corkory

The natural gas pipes will be seen from the interior as columns in various areas of the RSF. To preserve this rare architectural feature, the pipes will be coated with a clear, environmentally safe finish typically used inside of ships to coat ballast tanks. The coating can be used in interior spaces (like an office) and meets EPA requirements for an environmentally sensitive product.

"We wanted to display the material in an honest way," Macey noted. "And, getting round columns in a building is a bit of a dream. Out of 100 buildings, only one other would have honest round steel columns."

Honesty in materials is a theme throughout construction, other interior elements such as Colorado beetle kill wood paneling and pre-cast, insulated wall panels using recycled materials will continue the theme of reuse in the RSF.

"There are a lot of recycled and regionally available materials for use in buildings," Macey said. "Once people understand this, they will be surprised at how easy it is to make these choices."

Haselden Construction and RNL are building the 218,000 square-foot Research Support Facilities building, which is designed to be a model for sustainable, high-performance building design, and will provide Department of Energy-owned work space for administrative staff who currently occupy leased space in the nearby Denver West Office Park. The RSF is planned to achieve a LEED® (Leadership in Environmental and Energy Design) Platinum designation — the highest benchmark awarded by the U.S. Green Building Council. Construction on the RSF is expected to be completed in summer 2010.

Learn more about Sustainable NREL and the RSF.