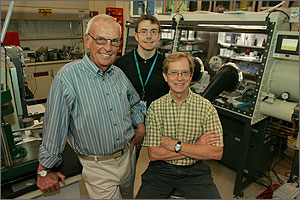 The PowerPlane UX, a coin-cell-sized battery produced by Planar Energy Devices based on NREL's patented design, recently won the World Technology Network's 2009 energy award. The battery was also counted among R&D Magazine's 2009 R&D 100, viewed in industry as the "Oscars of Innovation." It was one of three 2009 R&D 100 awards for NREL scientists and one of 45 such awards the national lab's scientists have earned since NREL opened in 1977.

To understand why NREL and Orlando, Fla.-based Planar are attracting such attention, it helps to understand a bit about batteries.

Batteries work through chemistry. The simplest battery contains two electrodes — a negatively-charged anode and a positively charged cathode — plus an electrolyte. Since their invention in the 19th century, the vast majority of batteries have contained liquid electrolytes, as everything from lead-acid car batteries to lithium-ion laptop computer batteries still do today. When the battery's circuit closes, the metal electrodes launch into chemical reactions in the electrolyte that spawn electrons. The electrons flee the anode in search of the cathode, only to find themselves devoured by various lights, motors and electronics along the way. Primary batteries — single-use throwaways — expire when the chemical fuel runs out. Rechargeables allow a reverse current to rewind the chemical cycle. 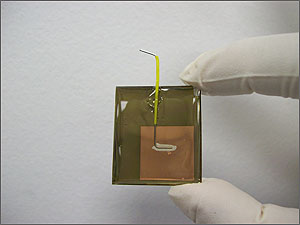 The small PowerPlane battery holds huge potential as a building block for bigger batteries for power tools, renewable-energy storage and electric and hybrid vehicles. Analysts predict the battery market will grow by billions of dollars in the next five years.
Courtesy of Planar Energy Devices

The other innovation, a process-engineering breakthrough, involved three NREL scientists in a group specializing in electrochromic technologies that dynamically control transmitted light in high-performance windows. Although the connection with batteries may seem tenuous, "thin-film electrochromics are nothing more than poor batteries that change color," as Ed Tracy, an NREL senior scientist, explained it.

In late 1999, Tracy and colleagues Se-Hee Lee and Ping Liu had recently wrapped up a battery project when they came up with the idea that eventually became the buried-anode thin-film battery.

Oak Ridge had made a solid-state battery comprised of three thin layers. On the top was the anode, in the middle was the electrolyte, and below that was the cathode. The anode, rich in lithium, had to be shielded from the outside world or it would corrode quickly from moisture in the air.

Process Cut by a Third 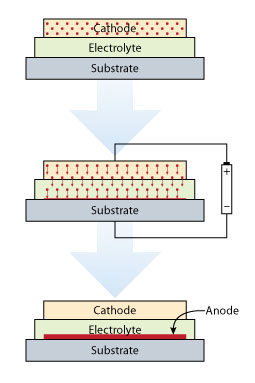 This drawing shows where the anode is "buried" in the layers of the thin-film microbattery.
Credit: NREL

At NREL, Lee, Liu and Tracy decided to try applying the LiPON electrolyte first, then layering the cathode over it. There was no anode at all. But the cathode contained a lithium compound. When a charge was applied, the lithium in the cathode migrated through the glass electrolyte and formed a metal layer on the other side — that is, the battery "manufactured" its own lithium anode. Not only that, the anode was buried under the glass electrolyte such that the atmosphere couldn't touch it.

They came in on a Saturday and made a battery. The following week, they tested it, then broke the news to their group leader, NREL Senior Scientist Roland Pitts, who liked it despite its lack of application in high-end office windows. In addition to avoiding corrosion, the approach would make solid-state battery manufacturing easier.

"The battery itself is three layers, but we form it by making just two layers," Pitts said. "So we get rid of a third of the process and that's pretty cool."

But without an industrial partner — and being somewhat far afield from their day-to-day electrochromics work — the new battery was shelved for five years. The patent on the technology issued in 2004. Soon thereafter, the buried-anode lithium ion battery attracted the interest of Battelle Ventures, which brought in serial entrepreneur M. Scott Faris to help with assessment of the business potential. In 2007, Faris launched Planar Energy Devices as a NREL spin-off to commercialize the technology. Pitts recently returned to NREL from a two-year sabbatical to serve as the company's chief science officer, and NREL continues to work with Planar on technology development.

Despite the microbattery's promise in such applications as wireless remote sensors, Planar is thinking big — to markets for power tools, renewable-energy storage and electric and hybrid vehicle batteries, which analysts predict will grow by billions of dollars in the next five years. Planar expects to have large-scale buried-anode batteries on the market in two years, says Andrea Wesser, the Planar product manager for the new battery technology.

Further process innovations will be crucial to entering such markets, she said. One of the key changes will be replacing LiPON with a new solid-state electrolyte — one that needn't be applied in a vacuum chamber. Vacuum chambers sharply increase production costs while limiting battery size, she said.

"Once you remove it from the vacuum chamber, you can introduce solid-state batteries into all applications," she said.

To that end, NREL is working on ways to deposit the buried-anode battery's cathode material outside a vacuum. Planar is doing the same with the electrolyte, Pitts said.