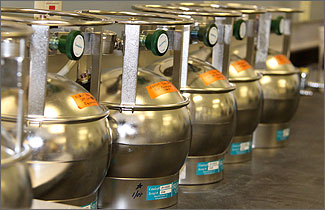 Storage canisters lined up in NREL's lab hold gas emission from cars that got a taste of higher levels of ethanol in the gasoline. Study results so far have shown that as ethanol increased, tailpipe emissions stayed largely the same.
Credit: Heather Lammers

Going on a diet can be good for you. And maybe a gasoline "diet" of traditional fuel blended with increased levels of ethanol will be good for the environment and economy without hurting conventional cars and small engines. NREL researchers are trying to find out, because these new ethanol blends could play a significant role as America tries to wean itself off petroleum based fuels.

The Energy Independence and Security Act of 2007 (EISA) is one force behind the quest for higher ethanol blends. The 2007 law requires that the U.S. use 36 billion gallons of renewable fuels by 2022. But, a leaner benchmark is just around the corner, with 15 billion gallons required by 2012. "We're pushed right now to find ways to get more ethanol into the fuel stream," said Keith Knoll, senior project leader for NREL's Fuels Performance Group.

Currently, ethanol is the most widely used and readily available renewable fuel. As a result, it is a likely candidate to make up a significant chunk of the 36 billion gallons required under EISA. Ethanol as a motor fuel is commonly found in E85, a fuel intended for use only in Flexible Fuel Vehicles (FFVs). Ethanol also is widely used as a 10 percent blend in standard gasoline (E10) to reduce carbon monoxide emissions and smog. But, increasing ethanol from the current 10 percent blend to a proposed blend of E15 or even E20, brings up a whole host of questions and issues.

For instance, E20 is currently not allowed for use in conventional automobiles under the Environmental Protection Agency's (EPA) Clean Air Act. This is where research from NREL and Oak Ridge National Laboratory (ORNL) will play a pivotal role in understanding how blends like E15 and E20 affect vehicles currently in the market. The research is examining whether using higher ethanol blends will have an adverse impact on tailpipe emissions, exhaust temperatures, catalytic converters and engine performance and durability. 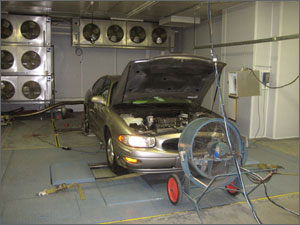 A 2003 Buick LeSabre is tested for emissions by NREL researchers while running on a blend of ethanol and gasoline. In the initial study, most cars adapted well to greater amounts of ethanol, but a broader study is underway.
Credit: Keith Knoll

While NREL and ORNL will be studying mid-level ethanol blends for some time, data from initial tests on small engines and cars was released in October 2008 and updated in February 2009. Follow-up reports addressing other vehicle effects will be issued over the coming year. Generally, the tests have shown no big surprises or short term effects when using greater blends of ethanol in existing cars.

"So far nothing has jumped out at us and vehicles don't show a significant impact with ethanol blends of 15 and 20 percent," Knoll said.

The automobiles used in NREL's test were meant to represent a cross section of cars currently in use. The 16 vehicles ranged from model years 1999 through 2007 with odometers reading from 10,000 to 100,000 miles.

All vehicles in the test experienced some loss in fuel economy, which is expected because ethanol has a lower energy density than gasoline. At the E20 blend level, the average reduction in miles per gallon was 7.7 percent when compared to gasoline only. "Another issue we looked at was whether there would be any unintended consequences on air quality when using the higher blends," Knoll said.

Study results so far have shown that as ethanol increased, tailpipe emissions stayed largely the same. There was no significant change in nitrogen oxides or non-methane organic gas emissions. Carbon monoxide emissions declined for all of the ethanol blends. There were increases in ethanol and acetaldehyde emissions, but these were balanced with reductions in other hydrocarbon air-toxic emissions.

When it came to how catalytic converters reacted to increased ethanol, results depended on how the engine control system regulated the fuel-to-air ratio during high power operation such as heavy accelerations or long hill climbs. Cars that adapted to the increased ethanol during these activities showed no change in catalyst operation — in fact some even ran cooler at higher ethanol blend levels. Seven of the 16 vehicles tested were found to not adapt to higher ethanol blends during high-power operation. For these vehicles, catalyst temperatures increased during power-enrichment, running about 29–35 degrees C (Celsius) higher on E20 compared to gasoline only. The long-term effects of this temperature increase are being investigated in other, ongoing experiments also funded by DOE.

"While these initial results are interesting, the next step is going to be a larger study, with more vehicles, that will look at the long-term effect that ethanol has on catalytic converters and numerous other issues like drivability and engine durability," Knoll said.

A Small Engine Can Get Revved 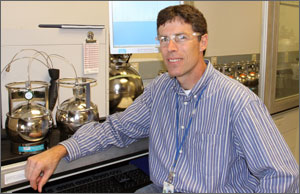 While car engines seem to take the higher ethanol blends in stride, the same can't be said for small non-road engines (SNRE). An April 2009 Chicago Tribune article on this subject painted an eerie picture, "Picture a chain saw calmly idling. But then it suddenly starts spinning on its own as if someone had goosed the throttle."

The Chicago Times article was a creative, but exaggerated take on what was found in the lab. For instance, it was the hand-held trimmers that got a little excited in the lab, however, "small non-road engines may have trouble with higher blends of ethanol," said Knoll. "This is an area where we need more research."

For this phase of the testing NREL and ORNL used 28 SNREs. Small engines don't have the same feedback control system as cars, nor do they have exhaust oxygen sensors. This means the engines can't automatically compensate for the added ethanol. So, small engines using higher ethanol blends tended to run leaner and hotter. The temperatures of the exhaust components, cylinder heads, and cylinders increased. Exhaust temperatures rose by 10 - 50 degrees C when moving from gasoline only to E15 and 20 - 70 degrees C from gasoline only to E20.

Back to those lawn trimmers. When running on a higher ethanol blend, three trimmers did show higher idle speeds and sometimes the clutch engaged on its own. However, Knoll thinks this is easily overcome. "Small engines can be designed to handle differences in fuel. While these engines may not handle a 20 percent change in ethanol, most currently run on E10. Future designs could be engineered to operate with whatever ethanol standard we move to."

Don't read too much into the initial tests for both auto and small engines cautioned Knoll, "Although we've got good data, this was a very small sample that is part of a much larger program."

The focus for all of this testing is to help policymakers like the EPA evaluate and understand the impact that new ethanol mixes will have on the existing cars that Americans drive every day.

The ethanol industry is currently seeking a waiver from EPA that would allow for widespread use of E15 in all automobile types. Right now, most gas stations across the country already sell blends using 10 percent ethanol.

"I think that for a long-term solution our focus for consumers is on E85," Knoll said. "Right now E85 use is limited because of the few fueling stations that are available and the limited number of flex-fuel vehicles that are on the road. Our research will give policymakers sound technical advice to help them decide the potential that blends like E15 and E20 will have in the marketplace."

Future mid-level ethanol blend studies will take a further look at issues like:

This research is co-led and co-funded by U.S. Department of Energy's Biomass Program and the Energy Efficiency and Renewable Energy Vehicle Technologies Program with technical support from NREL and ORNL. The team is working closely with representatives from the EPA, U.S. auto manufacturers, engine companies, oil companies and Battelle Memorial Institute to develop and conduct a robust test program.