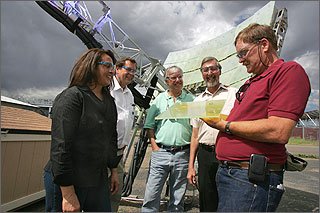 Engineers design a new auto paint, a better solar device or a sturdier vinyl siding. But how can they know if the new products deserve a five-year, 10-year or 30-year warranty, with the sun beating down on it day after day?

Better a leap in technology than a leap of faith.

A senior scientist at the National Renewable Energy Laboratory, working with researchers in Russia and Arizona, has come up with a way to shine the equivalent of 50 suns on new products that need to be tested for outdoor durability.

Beyond the 'Rip Van Winkle' Approach

Product manufacturers can find out in 10 weeks how their new paints or new anti-corrosive materials will look in 10 years.

"What's been done in the past is the Rip Van Winkle approach to testing," NREL senior scientist Gary Jorgensen said. "You put a product on exposure outdoors and go to sleep for 20 years. You wake up and see how long it lasted."

How to accelerate the effects of weather has long been a conundrum for the products testing industry.

The challenge has been how to simulate the effects of decades of the sun's rays, without getting things so hot that the product gets destroyed because it heats up more than it ever would in the real world. If the product gets too hot, it will blister, peel, melt or otherwise fail to function.

Sun damage on outdoor products comes almost exclusively from the ultraviolet rays in the spectrum, the same light that causes skin cancer in humans. The thermal load itself does little damage. However, the thermal load of five or 10 or 50 suns certainly would damage the sample.

The nub: How to let the ultraviolet light in, but block the visible and near-infrared parts of the solar spectrums.

Fruit of a 15-Year-Old Idea

NREL's new Ultra-Accelerated Weathering System (UAWS) is able to reflect virtually all of the sun's ultraviolet rays onto the samples, but attenuate the visible and near-infrared rays. The result is a system that quickly gives an accurate portrait of what the sun will do to a product in 10, 20 or 30 years.

The seeds of the idea go back almost 15 years. In the mid-1990s, NREL was involved with a national consortium trying to address a critical industry need: highly accelerated testing to allow companies to predict with confidence what the service-life guarantee should be on their products.

The automobile industry alone spends about $18 billion a year fulfilling service guarantees associated with their paint systems. It is crucial to know how long the warranties should be — and they can't wait 15 years to find out.

"It occurred to me that at NREL we already had a high-flux solar furnace that could provide exposures of 2,000 suns," Jorgensen recalled.

The furnace wasn't suitable for product testing, though, because it couldn't shine rays evenly over samples.

"We wanted to scale back from 2,000 suns to 50 or 100, and at the same time have the solar flux become much more uniform," Jorgensen said.

From Russia, with Mirrors

Serendipitously, a NREL scientist working on the furnace also was embarking on a separate project to homogenize the solar flux. "We had all the components there that we needed," Jorgensen said. "It was just a matter of putting existing pieces together and initiating our new project.

NREL researchers got going, but found they needed help. The scientists looked back to the end of the Cold War to find it.

The U.S. government had freed up some money to put former Soviet nuclear weapons scientists back to work. The aim of the Initiative for Proliferation Prevention was to re-employ the laid off Soviet scientists so they wouldn't be tempted to sell weapons technology to unstable regimes in order to feed their families.

"The Russian group designed the coated mirrors and the faceted mirror array," he said. "They were able to work on a socially redeeming project."

The UAWS has an array of 29 square mirrors with spherical curves. Just as a light house uses numerous pieces of bent glass to magnify light, the UAWS uses the curves of the many mirrors to concentrate the UV portion of natural sunlight.

Each of the mirrors has 96 layers of vacuum deposited coatings on them, Jorgensen said. Each layer of film uses alternating high- and low-refractive materials. The thickness of each layer helps produce mismatched refractions which, in turn, transmit some wavelengths and reflect other wavelengths back toward the sample chamber.

The array reflects the UV portion of the solar spectrum back to a chamber that holds the samples, which is on an arm about 10 feet away from the array.

Turning Down the Heat

By attenuating most of the thermal and infra-red spectra — that is, not letting them reflect back to the samples — the system keeps the heat down to about 35 degrees Celsius (95 degrees Fahrenheit) for some tests, about 65 degrees C (149 degrees F) for others. "It's called spectral splitting," Jorgensen said.

The samples still can get awfully hot just with the small sliver of thermal energy allowed in. So, to more precisely simulate the damage the actual sun will do over time, samples being tested are attached by vacuum to chilled copper blocks during exposure. Also, cool air blows across the surface of the samples to keep the temperature down.

NREL scientists have been able to successfully correlate exposure at the UAWS with real-time outdoor exposures and exposures in controlled laboratory chambers that use artificial lights sources. Using the UAWS they have demonstrated product lifetimes of 20 years based on two summer's worth of exposure. NREL also involved Atlas Materials Testing Technology, a global leader in product testing, with headquarters in Phoenix.

"The best acceleration technology was at the level of five or six suns," Jorgensen said. "We told them we could do better than that by a factor of 10. They got really excited and interested. They're now commercializing the technology."

UAWS is expected to be a hit with manufacturers of car paints, as well as the aerospace and electronics industries, the Department of Defense and designers of anti-corrosion materials for bridges and buildings. "Anything that is expected to last in an outdoor environment could benefit from the accelerated testing," Jorgensen said.

Pharmaceutical and biomedicine companies also could become customers because they need to know the effect of UV on human tissue, as well as "the efficacy of UV blocking agents" such as sunscreen, Jorgensen said.

NREL scientists Jorgensen, Al Lewandowski, Carl Bingham and Judy Netter, together with collaborators at the Institute of Laser Optic Technology in Moscow, and Atlas Material Testing Technology earned a prestigious R&D 100 award this year for the new technology. Called the "Oscars of Invention," the awards are presented by R&D magazine.

NREL has a UAWS on South Table Mountain near its headquarters in Golden, Colo. Half-inch square samples of new products are attached to the device, complete with the chillers and the coolers. The mirrors let ultra-violet do its damage but block most of the heat and the rest of the solar spectrum from the samples.

"This answers the question: 'Will it last for 20 years?' in a 20-week time frame," Jorgensen said. "It gives a tremendous competitive advantage to companies that will test this way."