OpenStudio, a new quick, easy to use and free software tool created by NREL developers seamlessly combines the building energy simulation of EnergyPlus with the popular drawing interface of Google's SketchUp.

Gone is the tedious and time-consuming task of manually entering building geometry data. Now users can quickly sketch a computerized 3-D drawing of a building and run a fast simulation during the early design phase to determine if their design is energy efficient. Taking a virtual X-ray of a building's energy use in the conceptual phase helps architects design a structure with fewer carbon emissions, lower utility bills and a healthier environment.

The OpenStudio plug-in is bridging the gap between energy modeling and the building design process. Nick Long, a NREL engineer who helps develop OpenStudio, says the software is a critical piece to getting energy simulation into the early design phase of building construction.

"Integrating energy analysis into that phase is very important because you can start to reduce energy use well before a building is even in conceptual design," he said.

Because of the simplicity of OpenStudio and the quickness of the SketchUp models, architects can easily use this tool during the launch of a building project. "Our hope is that by using OpenStudio in design charrettes, users can start throwing away designs at the very beginning of a project, saying: 'This is not a good design because we're going to use too much energy,'" Long said.

Around the globe, architects and engineers are embracing OpenStudio, which was launched in April 2008. Users can download the software for free and see how easy it is to improve a building's energy consumption in a fraction of the time of more-expensive computer-aided design (CAD) packages.

Approximately 700 copies of OpenStudio are downloaded each month. "It's been great," Long said. "Thousands of users of EnergyPlus are learning about OpenStudio and adopting it as the defacto geometry editor."

Developed by the Department of Energy in 2001, EnergyPlus is a stand-alone simulation program that models whole-building energy consumption from heating, cooling, ventilation, lighting, water systems and other energy flows. Long explains that the primary value of OpenStudio is to provide a graphical user interface to develop geometry that can be used directly with EnergyPlus. If a user already has an EnergyPlus input file, he can use OpenStudio to render and change the geometry without losing any of the other information already contained in the EnergyPlus file.

"Architects won't go into a text file to edit geometry, changing vertex by vertex," he said. "They want something graphical, and SketchUp is a quick method to render a building." In little time, a designer can create a building's geometry from scratch in SketchUp: add zones, draw heat transfer surfaces, draw windows and doors, etc., and then run an energy simulation in EnergyPlus.

OpenStudio offers many practical applications that give users the freedom to explore different design options, such as performing overhang analyses. When a building design has a lot of windows on the south side, the designer needs to know how big and how deep to make the overhangs.

"With OpenStudio you use the capabilities of SketchUp that will show the sun's path and cast shadows on the windows — at any time of the day for an entire year," Long says. "Then you can play a video and watch the sun move over the building for a year to figure out if you have effectively shaded your windows and also validate it using EnergyPlus."

Peter Ellis, principal developer of OpenStudio, took 18 months to write the complex program. He used open-source coding principles so that any developer has the flexibility to modify or enhance the software.

Christopher Cronin, Google's Strategist for SketchUp, says, "OpenStudio is lauded around our office as one of the most complicated plug-ins ever written for SketchUp." And Sang Ahn from Google adds that OpenStudio is the most impressive extension he has seen.

NREL developers are working to make OpenStudio faster and add functionality. "We're hoping to provide OpenStudio as a full graphical interface to EnergyPlus that allows users to edit HVAC, plug loads, and lighting loads, and the remaining building inputs at the same time," Long said.

Reducing energy use is an important factor in improving the sustainability of residential and commercial buildings. OpenStudio makes energy modeling software easier to use and more accessible and affordable in the early design phase. This enables architects to evaluate energy-saving strategies when design changes are least costly. 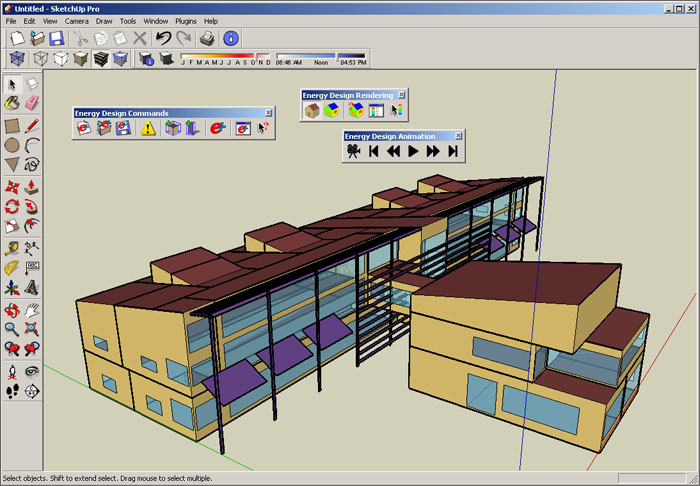 The OpenStudio plug-in is bridging the gap between energy modeling and the building design process, says Nick Long, a NREL engineer who helps develop the software.