It Takes a Solar Village

Team Germany's Cube House was one of the most technologically advanced among the 20 clean energy prototype designs on the National Mall. Every exposed face of the building was covered with power-generating panels.

On the roof : a 11.1-kW photovoltaic (PV) system of 40 monocrystalline silicon panels. On the sides: 250 thin-film panels that look like glossy clapboards. The thin films used copper-indium-gallium-diselenide layers, or CIGS.

The combination system was expected to produce 200 percent of the energy needed by the house. The thin film panels, while less efficient than conventional silicon, were projected to perform better in cloudy weather than silicon.

Team Germany got its proof on the competition's fifth day when skies turned slate gray and a cold rain splattered the solar village. By late afternoon, as federal commuters started streaming home and electricity demand throughout the city began climbing, the Team Germany house was producing 12.68 kW and consuming 12.33 kW, for a net export of .35 kW.

"Team Germany built a gingerbread house packed with solar panels," said Richard King, DOE Solar Decathlon director. "In the rain, the thin-film panels were making electricity. It made the difference." 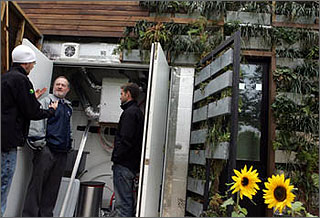 NREL has managed the biannual Solar Decathlon for DOE since the contest's inception eight years ago. Selection of the 20 university teams from North America and Europe begins two years before the actual competition.

The Laboratory sent 30 people to run the week-long contest on the National Mall, including installation of the homes with trucks and cranes, connecting them to Washington's municipal power grid, running the judged contests and monitoring the home's continual performance.

NREL senior engineer Byron Stafford has managed the Decathlon's technical systems since its inception eight years ago. Jamming his floppy blue beach hat over his ears and sloshing through deep muddy puddles, Stafford made a beeline for the Team Germany house to confirm the data his equipment was reporting.

"I can't believe they are net exporting in this weather!" Stafford said. "That's totally cool. It's reflective of where the world has gone." 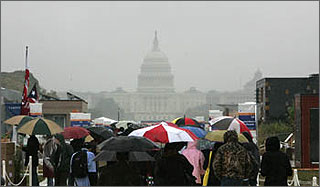 Inside the Cube House, a wall-mounted control panel showed each side of the house and the roof glowing with power production, even as digital readouts showed appliances and the climate system consuming power by the second. Team Germany was relaxing around the dining room table in shirtsleeves, relying on dim natural twilight seeping through windows.

"Every 15 minutes I check our systems and what the other homes are doing," Team Germany electrical engineer Andreas Schreiber explained. "Today the light is indirect, so every side of the house is making power."

Being grid-connected and exporting power was the most notable change in the 2009 contest. In previous years, the homes' solar panels charged batteries to power the homes' lighting and appliances.

NREL's Sara Farrar-Nagy, who is the Decathlon's project manager, compared the event to building a new high-tech subdivision overnight in one of the world's most iconic and supervised locations — between the U.S. Capitol and the Washington Monument and across from the Smithsonian Institution's "Castle" headquarters.

Complicating the Laboratory's efforts was the local utility's older transmission network that, like most municipal power grids, was established decades ago to deliver power to customers, but it was not built for two-way power flows.

"One house pushing power back onto the grid is no big deal," Farrar-Nagy said. "But on sunny days this week, all of the homes were exporting power. It was a quirky challenge. Building a grid-connected contest is a real accomplishment." 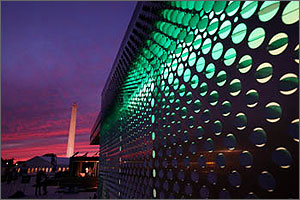 In the Decathlon, 20 teams of college and university students compete to design, build, and operate the most attractive, effective, and energy-efficient solar-powered house.

In addition to educating the next generation of renewable energy engineers, architects and green builders, the Solar Decathlon is intended to propel solar energy and energy efficient products into the marketplace and to demonstrate to the potential of zero energy homes.

Some of the homes in the competition already have been sold or donated for public and private use. The Rice University "ZeRow House" is scheduled to be relocated to that city's Third Ward in cooperation with Project Row House, a non-profit.

The Rice House finished eighth in the competition, but at about $200,000, it cost one-quarter of the Team Germany's winning design. It emphasizes skylights over windows and reduces the house's total energy use for lighting fixtures to the equivalent of three 100-watt light bulbs. The PV system is rated at 4.2 kW — a fraction of the German system, but is appropriately sized for the expected load of the house.

"The Rice team did amazing things with limited lighting and no windows on three sides," Farrar-Nagy said. "It's a testament to what is possible. A real family is going to live in that house in Houston."

More than 200,000 people visited Decathlon homes this year — including Energy Secretary Steven Chu, members of Congress and other dignitaries, as well as thousands of schoolchildren. Even on rainy days, visitors with umbrellas waited for 30 minutes outside each of the homes.

Parkland Middle Magnet School of Rockville, Md., closed for a day so it could send all 700 of its students to tour the Decathlon homes. The students split into small groups to interview university team hosts and complete homework assignments.

The middle school students were drawn to the prominent flat-screen TVs, sliding room dividers and touchpad controls for lighting and climate systems. Predictably, they skipped past the energy-efficient laundry centers.

At the Ohio State University house, students pointed to juxtaposition of century-old reclaimed barn siding with new silicon solar panels that are not encased in a sealed frame. With the backside of the panels exposed, sunlight reflects off the home's white roof to the cells and generates up to 4 percent additional power.

"When I grow up I think this is going to be like my college dorm room," said Joi Rice, 11.

"I like this house because I can watch the TV while I'm in bed," said Andy Zhang, 12.

"The California house, because it was more spacious," said Sayer Sampson, 12. "I think it looks better."

Learn more about the U.S. Department of Energy Solar Decathlon.